Four years ago, Georgia Simmerling was in an upper body and neck brace for seven weeks after a cartwheeling crash in a ski-cross race.

She fractured three vertebrae – C7, T2 and T3 – at the base of her neck and in her upper back. One day, at physiotherapy, an idea struck her. It was early in 2012 and she had already been to one Olympics – in alpine skiing, racing the super giant slalom at the 2010 Vancouver Winter Games. In ski cross, Simmerling aimed for the 2014 Sochi Winter Olympics.

She wondered if there was a summer sport she could pursue.

"I just had this idea," Simmerling said. "I played so many sports growing up, was super active in the summer – why not?"

The why-not impulse became a multiyear odyssey. It started in rowing. Simmerling then tried track cycling, first sprinting before focusing on endurance riding. Along the way, she raced at the Sochi Olympics in ski cross. The culmination came last summer, when Simmerling helped win a bronze medal in women's team pursuit in track cycling in Brazil.

Less than a month after the medal, Simmerling returned to ski cross. Last month, in her fifth World Cup race after an absence of nearly two years from the sport, she was back on the podium with a third-place finish. It was a significant step toward her new goal: win a medal in ski cross at the 2018 Winter Olympics in South Korea. Simmerling would become the second Canadian, after Clara Hughes, and sixth person ever to win medals at Summer and Winter Olympics.

"This would be incredible," said Willy Raine, athletic director of ski cross at Alpine Canada. "If I was a betting guy, I would put money on her. I believe she's going to do it."

'Didn't matter who else believed'

Three days after Christmas, Simmerling pedalled on a stationary bike at Level 10 Fitness in North Vancouver. Sweat percolated on her brow and, as she pressed on, dripped off her nose. Simmerling, 27, was home on a break from the World Cup ski cross circuit. The gym is popular with local professional athletes and Simmerling's been coming here since her mid-teens, when she was a rising alpine ski racer and promising soccer player.

Owner Anthony Findlay remembers the youthful Simmerling's physical fitness. As a teen, she ripped off a bunch of pistol squats – one-legged squats with the other leg extended. Findlay couldn't quite believe it.

"There are national team athletes who can't do that," Findlay said. He saw an unusual all-around ability in her. "She's not just whatever the one sport is."

Simmerling grew up skiing on Grouse Mountain, chasing after her three older brothers. "Just ripping around and a big smile on my face the whole time," she said. "Probably a little scared and loving it." She was part of an athletic family. Her oldest brother reached the CFL, playing a few games for the Calgary Stampeders.

Simmerling was 19 when she raced her first alpine World Cup downhill in late 2008. In three years, she started 18 alpine World Cup speed races, but never finished better than 29th. At the 2010 Vancouver Olympics, she had her best result, 27th, in the super G at Whistler.

But the upstart sport of ski cross drew her – the rodeo of four racers going at it head-to-head on a shorter course full of big jumps and banked turns. "This sport is crazy," she wrote on her blog at the time. "It's really not normal." She loved it, but the big crash came during her first season, in early 2012, with the broken vertebrae and trying convalescence.

It was a turning point in her athletic career. As she resolved to succeed in a summer sport, recovery honed her work ethic and fortitude.

Crossover athletes generally succeed in sports in which similar muscles are at work, said Olympic historian David Wallechinsky. Simmerling's gap is somewhat wider. That said, there are fewer top-tier competitors in her sports than in other competitive events. Still, medalling at both a Summer and Winter Olympics is "a great achievement," Wallechinsky said.

At the Sochi Olympics, during Simmerling's third winter in ski cross, she finished a disappointing 14th, but thereafter scored her first sustained success, a pair of third-place podium finishes. In the summer of 2014, she tried out track cycling. She sprinted to start, but "it was evident" she was better suited to endurance riding. She started to think about the 2016 Summer Olympics.

But, first, it was back to ski cross. The 2014-15 season started well. She had a pair of seconds and was ranked second overall as she came to the world championships in January, 2015. She qualified first. Then, in a training run, she got too aggressive and crashed – smashing her left wrist to pieces, breaking it in seven places. It took two plates and 10 screws to put it back together. The ski season was over.

Her mind shifted to the bike. The team she wanted to make was no also-ran. Canada's women won bronze in team pursuit on the track at the 2010 London Olympics and world championship medals each year since. Simmerling, guided by two coaches, headed to Los Angeles to train and produced a national-team standard time. She decided to forgo the next ski-cross season. She made Canada's endurance track cycling development team in the fall and quickly was elevated to the senior squad.

There was skepticism. "Most people just wrote her off," said Raine, the ski-cross director. Some in skiing questioned what looked like a foolish chase and some in track cycling wondered about the interloper.

"It's not just the physical aspect," said team veteran Jasmin Glaesser. "It's also the team dynamics. But Georgia proved herself right away. She was able – and willing – to learn."

The road was long. The training intensity was extreme. Simmerling remembered workouts that made her physically ill. There would be weeks of daily rides of five, six hours at high altitude. She rode hard.

The payoff came in Rio.

Griffin has coached Olympic track cycling teams in Canada and in the United States since the early 1990s. Simmerling's ascent from a "nobody," as she put it, to an Olympic medalist in 18 months is unprecedented. "That's just unheard of," Griffin said.

"There were many moments of doubt, but I just believed I could do it," Simmerling said. "It didn't matter who else believed. I accomplished something pretty amazing."

Arriving back in ski cross was jarring. It felt unfamiliar. Simmerling was as fast as ever, but struggled in heats against other skiers. In December, she finished ninth in her first three races. The breakthrough came in the fifth race, which she almost won, but slipped into third by a hair at the finish. She was ranked seventh after the season's first six races. The build toward Olympic medal contention in ski cross was ahead of schedule.

The season will be back under way on Friday in Italy, the first of eight more races. After next year's Winter Olympics, Simmerling wants to get back on the bike, riding to another peak: the 2020 Summer Olympics in Tokyo.

Clara Hughes sees the same: the beginning of a bigger climb. Hughes knows. Hughes won her first Olympic medal at 23 in cycling in 1996. She won her last at 37, a bronze in speed skating in 2010.

Hughes recognizes some of herself in Simmerling. Hughes switched sports, driven by an "insatiable curiosity" and a passion to prove herself again and again.

"Georgia is doing what she's doing because she can't not do it – and that's how I felt," Hughes said. "It wasn't about being the first person, or this or that. It was about: 'How good can I be at this?'" 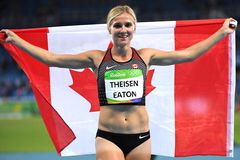 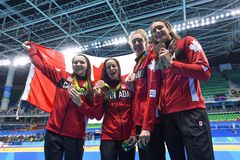