The pressure of the Olympics didn't derail Dara Howell. It was everything after that was difficult.

After winning gold in women's ski slopestyle at the 2014 Winter Olympics, Howell was celebrated – but, privately, the glare of attention burned. Five thousand people cheered the 19-year-old at a party in her hometown of Huntsville, in Ontario cottage country. She walked the red carpet at the Junos. In the summer,  Howell was on the cover of Sportsnet magazine's beauty of sports issue in a bikini holding her skis.

Beyond all the appearances and attention, it was the many intimate moments that Howell found the hardest, when strangers would congratulate her, tell her she had done the country proud, that they were so proud of her.

"I never really knew how to respond," says Howell – and then pauses, "… properly. I would say, 'Thank you, and I appreciate it,' but I always felt so ashamed. I didn't know what to say. I would step back and feel awkward and shy. I would slowly hide myself."

Howell struggled. There were recurring bouts of anxiety. She found herself sapped of energy. She slept in late and, when she got up, she didn't feel like doing much. She skipped a whole World Cup season and most of another. Her skiing started to slip and younger stars emerged.

Today, with the 2018 Winter Olympics in South Korea in February, Howell is rallying to vie for a medal. She was named to the Canadian Olympic freestyle team on Monday.

It has been a long, slow, and challenging recovery, one that involved finding a life away from skiing, connecting with new coaches to rebuild her skiing on the slopes, and finding a sports psychologist who helped her rediscover her passion.

"I'm lucky to ski for a living," says Howell, now 23. "I took it for granted. I'm ready. I'm excited. Everyone struggles. It's not talked about. People think it's a fairytale. There's fairytale parts to it. But there's also not."

Howell grew up in skiing. In Huntsville, her grandfather and her dad were community pillars and taught skiing on the modest slopes of the Hidden Valley Highlands ski area. As a girl, Howell was a ski racer and a figure skater. But as a teenager, her eyes turned towards the jump park. She had a short stint as a ski instructor, but the fun of the park exerted a powerful pull. Howell was a natural and she was soon on the national team, just as her event, slopestyle, had been added to the Olympics roster.

Howell, at 19, arrived in Sochi, Russia, as a contender for gold. She had won silver at the world championships a year earlier and bronze at X Games in Aspen a couple weeks before Sochi. There had been a concussion, too, several months before, but Howell was poised.

She had always put intense pressure of herself to succeed. In Sochi, her performance was dominant. She qualified first and then won gold. No one had better runs. But there was unseen stress, before the finals, as the weather worsened and Howell's practice runs were off. There were tears. Her dad, Doug Howell, helped her refocus. When it counted, Howell delivered. Her gold was the fourth of four early golds for Canada at the Sochi games.

The payoff came quickly, as a sponsorship with Red Bull that had been in the works was signed – the biggest name in action sports. But trouble soon hit Howell. "I was super overwhelmed," she says. She had a constant feeling of not wanting to let others down, and sometimes wondered what would happen if she decided to just give it all up. "I had a lot of bad days. I would call parts of it depression. Lots of anxiety. Worry. Stress. I didn't want to get out of bed. Just lazy. Not feeling good. The opposite of me. I felt so lost."

One issue, Howell says, was the lingering effects of a concussion. She was hurt in late 2013 but recovered. But she says symptoms such as sensitivity to light lingered through 2014.

"Once I came down from the high of it all, I think my symptoms came through, or I was aware of them more. I just didn't feel like myself," she says. It contributed to what she calls her "turtle shell."

Another big problem, Howell has realized with the perspective of time, was that she didn't really have a life or identity outside of skiing. It is the same for many athletes, who dedicate themselves so wholly to their sports. For Howell, so much happened so soon, and beyond skiing there wasn't really a Dara Howell.

She invested time in cooking and reading. Howell was drawn to books of struggle and recovery, such as Brain on Fire by Susannah Cahalan, which chronicles the young reporter's experience with illness caused by a brain inflammation, and Wild by Cheryl Strayed, about a young woman on a long hike to overcome personal traumas.

A key connection for Howell came in the summer of 2016. She started to see Dana Sinclair, a sports psychologist who works with the Detroit Lions and other pro teams and athletes. Sinclair remembers the Howell she first met: "Open and full of energy and clearly wanted to get better."

The first thing Howell needed to do, says Sinclair, was to think about motivation, whether she really wanted to ski at the top level.

It is, from the outside, presumed as a given that elite young athletes without question want to devote untold hours to their craft and forsake at least some if not most of their youth.

Howell had wrestled with the question. But by the time Howell connected with Sinclair, Howell knew what she wanted, and where she was going. Her work toward the Winter Olympics in Korea began in earnest.

But time away from a rapidly evolving new sport, as younger talent emerged in women's ski slopestyle, had cost Howell. Howell's strength on big jumps was not enough to outweigh her weakness on rails. The results in competition, last winter, did not look good: On the World Cup circuit, in five events, Howell finished 16th, sixth, 22nd, 11th, and 15th. Meanwhile, Kelly Sildaru, an Estonian, was winning X Games at age 13 and 14 (but will miss the Korea Olympics because of a torn ACL).

A return to the podium in Korea for Howell seemed a long way away. But even with the so-so results, Howell felt her life in skiing had come back into focus. With Sinclair, Howell learned to become sturdier. A botched rail or a flubbed jump or a string of unimpressive results did not daunt Howell.

"Tough resilient people – it's not that they're not making mistakes, it's that they stay calm and refocus," says Sinclair.

Last spring and summer, Howell redoubled her work. "I didn't put in the time," says Howell of the necessary training she had missed. Working on her rails was essential. She trained inside at Axis Freestyle Academy, north of Toronto, and leaned on the tutelage of new coaches, Geoff Lovelace and Sian Llewellyn of Agenda Freeski.

Howell was able to smile even as the evitable falls happened. In early June, indoors at Axis, she landed a difficult rail trick, starting backwards, jumping on 90 degrees, rotating 180 degrees on the rail, and jumping off, landing forward. A week later, on snow at Mammoth Mountain in California, she did a difficult variant of the trick and, coming off the rail, her legs landed wide, cut into the soft snow. She faceplanted.

"Just making sure the splits are possible… 😏," Howell wrote on Instagram when she posted a video of the fall.

In 2014, when the attention dizzied Howell, it came in part because she's never been a natural for the spotlight. As a girl in school, she was terrified of public speaking. Now, however, Howell has come into her own. She's having fun. In early September, she was all smiles throwing out the first pitch at a Toronto Blue Jays game.

Howell has shown promise on the slope in recent months. In the first World Cup of the season, in August in New Zealand, Howell was third in qualifying before finishing seventh. In mid-December, she was sixth at Dew Tour in Colorado. In mid-January, at Snowmass, Colo., she finished last, as she tried out new tricks but stumbled. She improved at the last World Cup before the Olympics, at Mammoth in California, where she finished 13th.

Simply being back at the Olympics is no longer the goal for Howell.

"I don't want to go to the Games to say, 'Yeah, I made it through what I went through – and I'm back,'" says Howell. "For a time, I thought I would be okay with that. I've had a hard two years. But the person I am, my goal is to go back and win a medal." 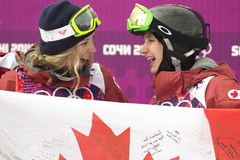