A great many South Africans stayed up until 2 a.m. on Monday to watch Cape Town sprinter Wayde van Niekerk run 400 metres around a Rio track on his way to a world record and a gold medal. His epic win was a burst of good news in a country that has lacked for things to celebrate of late. And because Mr. van Niekerk, 24, runs for South Africa, his sprint also kicked off a bout of the country's other national sport: debating race and identity politics, and just who gets to claim the new hero. Mr. van Niekerk's story made for instant admiration. He won Sunday in 43.03 seconds – 0.15 seconds faster than U.S. track star Michael Johnson ran in 1999.

Mr. van Niekerk is the first South African to run the 400 metres in under 44 seconds, but also the first man to run 200 metres in under 20 seconds and 100 metres under 10. He not only eclipsed Mr. Johnson's 17-year-old record, he was also the first to win the race from the outside lane. It is South Africa's first gold medal in track and field in nearly 100 years, and the first since the country's full return to international sport competition after apartheid.

Rio Olympics Day 11: What to watch and the latest news

His coach is a 74-year-old great-grandmother, who watched his run Sunday night with her hands clasped to her face. His mother was herself a track star who was denied the chance to compete internationally because of apartheid.

"The whole of South Africa is jumping for joy. … We haven't had very many good news stories in a long time, and this is the happiest story this year," Ethel Williams Abrahamse, a filmmaker and activist, said in a telephone interview from Cape Town. "Even we who don't believe in athletics, we really needed this – we needed to come together," said Ms. Williams Abrahamse, who, like Mr. van Niekerk, is of mixed-race heritage, known in South Africa as Coloured. "And we are also very excited with the fact that he does come from a less privileged-than-the-average background: One of the things we fight a lot about in this country is access to facilities for all. He managed to do this with a 74-year-old coach. Imagine, with all that talent what he could have done if he had had access to professional coaching, and the sponsors and equipment that white athletes do?"

When sports reporter Junia Stainbank interviewed Mr. van Niekerk for the South African channel eNCA at the national championships two months ago, he asked the runner what he was most proud of. The reply came instantly: "My grades."

Mr. van Niekerk is studying commerce at the University of the Free State, where Anna Botha has run the athletics program for the past 30 years, Mr. Stainbank said. Ms. Botha is widely known in South Africa as Tannie Ans, roughly translatable as Aunt Annie, and she took Mr. van Niekerk on after a devastating hamstring injury appeared to have ended a promising career while he was still competing as a junior.

Mr. van Niekerk's mother, Odessa Swarts, was a track and field competitor who set national records, but she chose to compete in the non-racial sports organization that opposed apartheid, which meant she could never compete outside the national level. The full glare of the media spotlight is on the family now, with grainy interview footage dug up of Ms. Swarts talking about how her son was born a month early ("he's always been fast") and how doctors initially told her he might not survive his first 24 hours.

Gino Fernandez, a comedian who stayed up all night huddled in blankets in the Cape Town Winter to watch the race on TV, said Mr. van Niekerk's extraordinary run has extra meaning for South Africans. "For someone to win gold and break a record is awesome," he said. "And then – it's not a white guy. That's a massive difference as well."

The Coloured community is a distinctly South African one, a people whose racial heritage results from the intermixing of Europeans and Bantu Africans as well as South Asian slaves imported in the 1600s and the Khoi-San people who were indigenous to the region. Coloureds were classified as a separate group by the apartheid government, which gave rise to a distinct cultural identity; many speak Afrikaans as a first language.

In the post-apartheid era, they have continued to occupy a separate and sometimes marginalized sphere, roughly summed up as "not white enough before, not black enough now."

"It shows everyone what's possible, you know?" Mr. Fernandez said. "South African Coloured people, we never really had a hero – we'll always be in the middle somewhere, always like a second-grade race – so for something like that to happen is just incredible."

Shortly after Mr. van Niekerk won his medal, the term "Coloured" began to trend on social media and the debate continued lustily into Monday. Some posters were quick to claim him for the community, others to make the argument (which was common in the anti-apartheid movement) that everyone who isn't white is black and that the apartheid-era label Coloured has no place in the new South Africa.

Eusebius McKaiser, a prominent radio host and political commentator in Johannesburg, said the response was uniquely and predictably South African – first in the swing from misery to elation. The country is in a dark moment, with a limping economy, and widespread dissatisfaction with the government of President Jacob Zuma, which recently produced the most divisive municipal elections of the country's democratic history.

"Those were an expression of deep discontent with the state of the state and the state of political leadership – but this and the last few days of athletes doing exceptionally well is helping to swing us out of a state of depression and slip into a bubble bath," he said.

In that, it is reminiscent of South Africa's surprise win in the 1995 rugby World Cup (retold in the film Invictus) and success in holding soccer's World Cup in 2010, Mr. McKaiser said – another welcome respite.

It has been a good Games for South Africa: Swimmer Chad le Clos has won two silver medals, long jumper Luvo Manyonga won silver and there was also a bronze in rowing. And Mr. van Niekerk's cousin was part of the men's rugby sevens side that won bronze as well. Mr. Manyonga's is another feel-good story; he spent years addicted to crystal meth, or tik as it is known in South Africa, before making a track comeback.

Mr. McKaiser, who is Coloured, also chuckled at the fact that a sporting medal immediately set off an identity politics debate. "How about waiting for the dude to come back here – we're ascribing all kinds of identities on to his body – without understanding his own views."

How previous steroid use could give a boost for entire athletic career
August 15, 2016 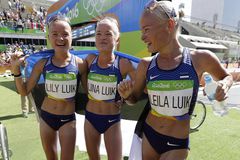