Coronavirus information
The Zero Canada Project provides resources to help you make the most of staying home.
Visit the hub
Grant Robertson
Published April 3, 2020 Updated April 3, 2020
Comments
Please log in to listen to this story. Also available in French and Mandarin. Log In Create Free Account

As a competitive swimmer, Brent Hayden has been racing against the clock most of his life. But his battle against time has just become a lot more pressing.

This fall, the 2012 Olympic bronze medalist decided to launch a spectacular comeback, returning for the Tokyo Olympics at the age of 36 after seven years away from the sport. He could almost count on two hands the number of times he’d dipped his toes in a pool during that span.

It was a monumental challenge, even if everything went smoothly. But of course, nothing in the world has gone smoothly these past few months. The coronavirus pandemic has brought entire cities and economies to a standstill, forcing the Tokyo Olympics to be postponed a year.

No one knows for sure what impact that 12-month delay will have. At this point, no athlete can say when they will be back in the pool or gym again, leaving most to train at home on their own, some using makeshift equipment and modified strategies. For the youngest athletes, an extra year could end up being little more than a minor blip in an otherwise long career. For Hayden, it’s a potential liability.

With the Tokyo Olympics officially rescheduled this week to begin July 23, 2021, Hayden is now busy reformulating his comeback calculus. At no point did he contemplate throwing in the towel, he just needs to rethink his approach.

“Just because the path changed, it doesn’t mean you need to change the destination,” he said over the phone from New Westminster, B.C.

While some of his competitors may fret about losing a year of their prime, Hayden is out to prove that the whole concept of a prime is just a mirage.

“When I was younger, I had this idea in my head that athletes were in their prime when they are younger and every year after that, you’re just on this downward slope,” he said. “But if you know how to adapt your training according to your age, or your body type or a whole range of variables, then there is no such thing as prime.”

His revelation came last fall, in Lebanon, where he and his wife had gone to visit her family and film instructional videos for their business, an instructional website called Swimming Secrets. Hayden got back in the pool to demonstrate a particular stroke for the camera and his arms felt heavy. But then, after a few minutes, he couldn’t believe how good he felt.

Seven years away had done the unexpected. When Hayden hung up his racing cap after taking bronze in the 100-metre freestyle in 2012, his body was broken, and his mind was beaten down. A bad back had left him unable to walk some days and sapped his leg strength in the pool. In some ways, the bronze was a miracle. Leaving the sport was less a choice than a necessity.

Now he felt rejuvenated. His back was recharged and his stroke felt like it never left. So Hayden timed himself and wrote an e-mail to a few people at Swimming Canada, asking what they thought. "I kind of had the sense that they were probably going to say no, but I didn’t want to make that decision for them,” he said.

The message landed overnight in the inboxes of John Atkinson, Swimming Canada’s high-performance director, and Nathan White, the head of communications. The next day, the two men looked at each other and said: “You’ll never believe who e-mailed.”

Hayden had been off the swimming grid. But his reputation was good. To his shock, the national program wasted no time on backing the comeback.

“There’s very few athletes that get to the pinnacle of standing on the Olympic podium. So your first question is, ‘How can we work with this,'” Atkinson said. “When somebody of Brent’s ability is telling me, "I’m still in pretty good shape, and actually swimming quite well in the pool,' well, let’s bring that on and let’s see where this can go.”

Despite not having competed in years, Hayden swam a time of 49.51 seconds in the 100-metre freestyle at a February event in Calgary, and later trimmed it to 49.46 at a meet in Des Moines in early March. Though still behind the 48.51 time he swam during the opening heats in London, and the 47.80 that earned him bronze in the final, the results showed he was trending in the right direction.​ Hayden’s 50-metre time of 21.97 seconds in Des Moines was enough to make the Olympic cut-off.

At a time when athletes have been scrambling to revamp their training, using whatever equipment they have on hand, Hayden has started building at-home workouts for other swimmers to follow.

“You can’t buy experience,” Atkinson said. “And there’s very few people with the type of experience that Brent has in the sport, particularly in our male program.”

The workouts range from the practical to the zany, using everything from plyometrics and rubber-resistance bands to simulate a swimming stroke outside the water, to videos he’s posted on social media as a lark, designing workouts around surplus rolls of toilet paper.

While the toilet paper workouts are intended to keep things light, the threat of athletes falling back during the months ahead is real, so the need to train intelligently and strategically has become a rallying cry.

“Your body can’t tell one weight from another,” Hayden said. “It can’t tell a dumbbell from a bucket of water as long as they’re the same weight. Feel free to get creative.”

Rather than view it as a setback, he’s now treating the one-year delay as an opportunity. “It’s not the comeback story I was hoping to write,” Hayden said. “But I knew that giving myself less than a year to do this in was already going to be really tight for time.”

The extra months will allow him to heal a small shoulder problem that’s been nagging. He also thinks the delay could throw the swimming rankings into upheaval, allowing some competitors to make gains on their rivals through effective training.

At his age, Hayden rests more than he did in his 20s, he focuses on nutrition more than before and he’s felt the impact from doing things differently.

“My body was just telling me it was ready to go,” he said. “Well, okay, if you’re ready to go, then I’m going to get the other troops in line right now – my mind and my soul – to do what it is that it’s telling me that it’s ready to do.”

Whether the comeback comes at 36 or 37 is irrelevant to him now. “I even told my wife, ‘You know what, honey – if they end up cancelling Tokyo altogether, what do you think about Paris 2024?’” 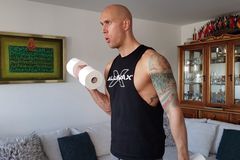