Michael Woods began cycling to supplement his training as a runner. After a while, he decided he was better at his hobby than his athletic day job.

He turned pro late in the game. He’d already been to one Olympics and hadn’t made much of an impression.

But in Tokyo, he came in with a small head of steam. He’d showed well at the recent Tour de France, so much so that he’d quit early in order to get a jump on the coming Games. He wanted to adjust his body clock, and get in some miles in the oppressive heat.

A series of life decisions – small and large – led the 34-year-old on Friday to what observers were calling the most difficult road course in Olympic history. In particular, there were two punishing climbs waiting for riders at the end after five hours of max output.

Lance Armstrong used to say that he didn’t cycle for the pleasure, but rather for the pain. Woods brings that sort of mindset to the sport. Two gruesome climbs suited his style.

If you haven’t spent a lot of time obsessing about cycling (admittedly, like myself), there were moments on those climbs, particularly the second one, where you thought Woods had it.

More than once, the rider in blue with the Maple Leaf epaulets separated himself from his far more fancied and famous European and South American peers.

When he is up in the saddle and headed to vertical, Woods is something to watch. He’s like a piston with arms.

But each time, the likes of eventual winner Richard Carapaz (Ecuador), his European doppelganger, Tadej Pogacar (Slovenia), and the magnificently named Wout Van Aert (Belgium) reeled him back in.

Afterward, Woods would said he had three visions for the race – a top five if everything went well, a medal if he was lucky, and a gold if he was very, very lucky.

Carapaz won pulling away. A trailing group of eight slowed before the dogfight at the end. You could see then that Woods knew he was outmatched.

“Maybe fourth,” Woods said he was thinking after being unable to shake the others in the climb. “Maybe fifth. And if I got really lucky, third.”

Note the order there. He was thinking fourth.

More cunning competitors boxed him in just before the sprint. Woods was able to break free quickly, but quickly in a cycling sprint is already way too late. He placed fifth, simultaneously milliseconds and miles away from the podium.

“I didn’t have the luck I wanted to,” Woods said a few hours afterward. “But I did have the legs.”

To hear Woods say it was to realize he had no regret, or no more than a manageable amount. You can always tell in the voice. A little too high and insistent. Matter-of-fact is the hardest note to hit if you actually feel as if someone just reached into your chest, Indiana-Jones style, and pulled out your heart.

Woods was 100-per-cent matter-of-fact. Genuinely pleased with his showing. That’s the luxury of being a professional and going to the Olympics. You have the perspective to see that not letting the occasion overwhelm you is a sort of victory. That’s something you can reapply at work.

For Canada, that’s all it is – a moment. If Woods had done it just one day later – the first day of swimming finals, with the nation expecting great things out of the pool – it probably wouldn’t have caught much notice. Is that fair? No, but it is that way of things. A fifth doesn’t rate many headlines.

But because it was the first proper day of the Olympics and Canada didn’t have much going on, you may have watched. If you did, I’m guessing you were blown away. A lot of bike races turn into processions long before the end. This one was a complete toss-up for the full six hours.

Televised sporting entertainment doesn’t get any better. If you missed it, do yourself a favour and go back and watch the last half-hour.

That was the time frame where, for just a moment, it all seemed possible for Michael Woods. That his story of being a runner-turned-cyclist from a country that doesn’t rate his sport would enter national lore. That he’d become the next Kerrin Lee-Gartner or Simon Whitfield – a Canadian who comes out of nowhere to win at one of those glamour sports Europeans obsess over.

Let’s face it, as Canadians, we don’t want to watch a whole lot of downhill skiing, but it does feel good to be the best at it.

A couple of moments where you thought a whole generation of kids would be getting road bikes for Christmas or birthdays so that they could be like Michael Woods. It was there, and then it was gone. That’s the difference the length your arm makes right at the very end of 234 kilometres.

The race ended around 6 p.m., local time. By 10 p.m., Woods’s mind had moved beyond it. So far beyond, he was already planning the rest of his life.

First, he’ll go home and see his wife, who is in the midst of her own Olympics, about to give birth at any moment. That’ll be another race Woods will hope to have the legs for.

And then the Paris Olympics in three years time. Woods will be 37 years old then – ancient in a lot of pursuits, but historically a sweet spot for a certain sort of cyclist. Age gives us all the knowledge that life is pain, but only a few of us can apply that directly to our jobs. 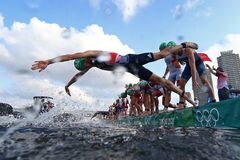 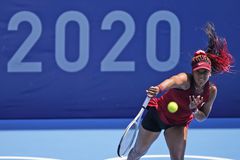