Jenna Caira delivered one of her devastating change-ups.

The Canadian reliever did it again. And again.

Five in all. Each one fouled off in Japan’s searing summer heat.

Up 0-2 in the count Saturday on Australia’s Taylah Tsitsikronis, who had moments earlier smacked starter Sara Groenewegen’s final offering just wide of the left-field foul pole for what would have been a second-inning grand slam, Caira couldn’t quite get one past her locked-in adversary.

Then the 32-year-old from Toronto finally decided to go with something a little harder on the sixth pitch – “a gut feeling” – to register the strikeout before retiring the next batter to end the threat.

“I trust (catcher) Kaleigh Rafter with my whole heart and being,” Caira said tossing five consecutive change-ups. “I had to trust that was the pitch I had to beat her on.

Caira was outstanding in 4 2/3 innings of relief, Jennifer Salling and Erika Polidori each drove in two runs, and Canada downed Australia 7-1 in softball at the Tokyo Olympics.

After watching Groenwegen escape a bases-loaded jam in the first with only one run scored before his team responded with three in the bottom half, Canadian head coach Mark Smith made the call to yank his ace in the second.

“The bottom line is (Tsitsikronis) just about hit the ball out of ballpark,” he said. “With Jenna’s off-speed pitch, that’s the great equalizer.”

Caira struck out three, gave up just two hits and didn’t walk a batter to get the win as Canada improved to 2-1 at the six-team tournament.

“So proud of her,” said Jennifer Salling, who picked up her two RBIs on a ground rule double in the first. “She did such a good job of keeping them off balance. Most importantly, she came in with confidence. You could just feel her energy and her confidence.

On the heels of Caira’s big-time hold in the top of the second, the Canadians made it 4-1 in the bottom of the inning on a throwing error before Polidori belted another ground rule double to plate two more after Australia walked Salling intentionally to load the bases.

They tacked on a seventh run on Emma Entzminger’s RBI single in the fourth, and cruised from there.

“(Australia) has been a team that over the years has always given us a fits,” Smith said. “We’ve come out on the wrong side of some of these games.”

Ranked third in the world entering the Games, Canada rebounded from Thursday’s 1-0 loss to the No. 1 United States on a sweltering morning at Yokohama Baseball Stadium that saw the humidex touch 35 C.

No. 8 Australia, which beat out Canada for bronze the last time softball featured at the Olympics in 2008, dropped to 1-2.

Four players from that event – Salling, Rafter, Danielle Lawrie and Lauren Regula – remain in Canada’s fold. Stacy Porter and Belinda White are the two veterans left from Australia’s roster some 13 years on.

“I have an extreme amount of respect for Australia,” said Salling, 34, of Port Coquitlam, B.C. “They’re gritty – they fight, they battle, they compete until the very end.

The teams with the four best records following round-robin play have a shot at medals. The No. 1 and No. 2 seeds go for gold Tuesday after the third- and fourth-ranked nations square off for bronze.

Canada has never won a medal in Olympic softball, while Australia and the U.S. are the only countries to stand on the podium at all four Games where the sport has featured – 1996, 2000, 2004 and 2008.

Softball and baseball, both nixed in 2012 and 2016 from the Games’ docket, have been scratched for Paris in 2024, but there’s a good chance both will return four years later in Los Angeles.

While the Olympics officially opened Friday, the first two days of softball were held about 240 kilometres from the main sites in Fukushima before switching to Yokahoma for the remainder of the event.

Located about 30 kilometres south of the Tokyo’s Olympic Park, the venue is home to the Yokohama DeNA BayStars of Japanese baseball’s Central League. The 34,046-seat facility – devoid of fans because of the COVID-19 pandemic – has played host to a long list of musical acts since opening in 1978, including Michael Jackson, Tina Turner and Madonna.

Canada now turns its attention to the Olympic hosts for the fourth of its five round-robin games Sunday.

And if Smith’s club is going to play for gold in Japan, more of the fight and determination saw against Australia – especially from his lights-out reliever – will be crucial.

“Very, very disciplined,” he said of the 2008 gold medallists. “We’re going to have to come up with a very good, strategic ball game.

“We look forward to that.” 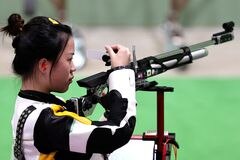