GUATEMALA CITY
The Canadian Press
Published May 4, 2021 Updated May 4, 2021
For Subscribers
Comments
Text Size
Please log in to listen to this story. Also available in French and Mandarin. Log In Create Free Account

Late goals by Ian Bennett, Safwane Mlah and Bila Dicko-Raynauld lifted Canada to a 4-2 comeback win over Haiti at the CONCACAF Futsal Championship on Tuesday.

The result eliminated Haiti (0-2-0) and assured Canada (1-0-0) of advancing to the knockout round. The win was just Canada’s third in seven career games (2-5-0) at the tournament.

The tournament, which runs through Sunday, will determine the four representatives from North and Central America and the Caribbean at this September’s FIFA Futsal World Cup in Lithuania.

The top two in each of the four groups advance to the quarterfinals with the final four booking their ticket to Lithuania.

Down 2-0 at the half, Canada’s Damion Graham finally beat Haiti goalkeeper Steve Jonathas with 8:18 remaining, finding the corner of the net.

Bennett redirected a shot from goalkeeper Joshua Lemos, who had joined the attack, with 4:25 remaining to tie the score.

The 19-year-old Mlah scored the winner in the final minute, sending a shot through Jonathas’ legs. Dicko-Raynaud sealed the win with a goal into the empty Haiti net.

The Haitians were no strangers to the Canadians given the bulk of the team hails from Montreal with Haiti bloodlines.

Monfort opened the scoring for Haiti at 14:28 of the first half, taking a pass from Ritch-Andy Jean-Pierre and sending a low shot under Lemos who got a hand to the ball but could not keep it out.

Syla made it 2-0 in the final seconds of the half, blasting a left-footed free kick high past Lemos after Canada captain Robert Renaud took down Nicolas Bertrand in front of goal.

Jonathas made some timely saves in the second half. He got some help, with Marco Rodriguez hitting the crossbar midway through the half.

Haiti finished eighth and last in its only other appearance at the tournament in 2008, when it was outscored 22-3 in going 0-3-0.

The 2021 tournament was originally scheduled for last May but was delayed due to the pandemic. French Guiana, Martinique and Guadeloupe withdrew in the interim, reducing the field to 14.

All games are being played at the Domo Polideportivo, which hosted the 2000 FIFA Futsal World Cup.

The indoor futsal game is five-a-side with two 20-minute halves. The clock stops whenever the ball goes out of play or there is a break in play. Each team starts with one goalkeeper and four outfield players on the pitch, with unlimited substitutions.

It is a high-energy physical game, with space at a premium and close control of the ball an asset.

Canada came close to making the 2016 FIFA Futsal World Cup, denied by a 7-4 loss to Cuba in its final group game at the CONCACAF qualifier. The Canadians lost to Costa Rica 3-2 and beat Curacao 7-4 before falling to Cuba.

Canada ended up finishing sixth in CONCACAF in 2016. It placed seventh in 2012, its only other participation.

Canada has not qualified for the Futsal World Cup since the inaugural event in 1989 in the Netherlands, where it failed to advance from the first round after beating Japan and losing to Argentina and Belgium.

There are seven returning Canadian players from the 2016 CONCACAF Championship including the Brazilian-born Freddy Moojen. The 38-year-old won the Golden Boot at the 2016 qualifier with five goals in three games.

Asia’s qualifier was also called off due to COVID-19. The Asian confederation has nominated Iran, Japan and Uzbekistan with playoffs later this month featuring Iraq versus Thailand and Lebanon versus Vietnam to determine the region’s last two spots. 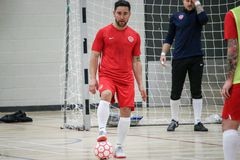