After one of the most eerie and unsettled lead-ups to the 100-metre men’s sprint final in Olympic history, Canada’s Andre De Grasse finished third to win bronze, posting 9.89 seconds.

A third individual Olympic podium, to go with the two others from the 2016 Rio Games, positions De Grasse alongside the greats in Canada’s rich sprinting history. He may not have Donovan Bailey on golds or world medals, but he has him on numbers – three individual medals at the Games overall to one.

Sunday was blazingly hot. As is its habit, Tokyo didn’t bother cooling down much once the sun had gone down. More than an hour after darkness, it still felt like an especially sultry 33 C in the Olympic Stadium.

Sprinters prefer it on the warmer side. But humidity this crushing is something else.

De Grasse was attempting to build on his qualifying rounds into the final. He was close to his personal best on Saturday in the heats, posting a 9.91.

Two and a half hours before Sunday’s final, he went through a trying semi-final. It began with a false start. It was followed by a five-minute delay as officials made repairs to the starting mechanism. While a pair of frantic repairman fiddled, the eight racers paced uncomfortably around the track. It took so long, many had given up on staying loose and stopped moving around entirely.

When everything was calibrated again, the delay appeared to rattle some of the field. Jamaica’s Yohan Blake – the third-fastest man in history – placed sixth.

De Grasse cruised into second in the semi behind Kerley. He didn’t look nearly as comfortable as he had the night before. De Grasse’s time was a good, but not great at 9.98.

An unsettled field became more untethered from expectations in the second and third semis.

In one semi, early race favourite Trayvon Bromell lost out on second spot – and an automatic qualification – by one one-thousandth of a second. That would cost him dearly a few minutes later.

The third semi was even more of a shock. In that third and final sprint, the times jumped up. The winner was Chinese sprinter Su Bingtian. Su set an Asian record at 9.83.

It was the 12th fastest 100-m ever run, just a hair quicker than the performance that won Bailey the men’s 100-m gold in Atlanta.

De Grasse was an automatic qualifier based on his second-place finish in the semi, but his time put him only seventh in the eight- man final. If drama was the early goal, De Grasse and his colleagues had supplied it.

De Grasse arrived in Tokyo as the Canadian bookend to swimmer Penny Oleksiak. She’d owned the first-week headlines at Rio in 2016. De Grasse had monopolized the news during the second week. Between winning medals and playing Robin to Usain Bolt’s Batman, De Grasse made himself a national star.

Also like Oleksiak, the five years between Olympics have been fraught. Injuries and dips in form have sidelined him. De Grasse arrived in Tokyo having de-emphasized the 100-m in favour of the 200-m. That other final will go on Wednesday evening. 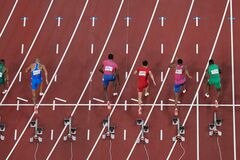 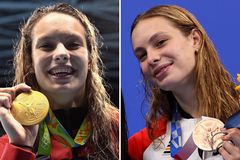