There were no losses for Canada’s Brooke Henderson at the Tokyo Olympics, just lessons.

Henderson shot a 4-under 67, her best round of the Summer Games, to finish the women’s golf tournament at 4 under overall, tied for 29th. Although it was a disappointing result for the eighth-ranked women’s player in the world, Henderson said she learned a lot about mental toughness over her four rounds at Kasumigaseki Country Club.

“It would have been easy for me to, once I was out of medal contention, just to give up. But we said ‘Let’s just fight for every shot and try to make a climb here,”’ said Henderson. “I think that’s really important.

“People think courage is a big thing but sometimes it’s just doing your best in that moment and always trying to do the next right thing.”

It’s been a challenging year for Henderson and her sister/caddy Brittany, as they haven’t been able to see their parents for months because of COVID-19 restrictions. Their father Dave Henderson is also Brooke’s coach, and she said being away from him and her mother Darlene has been difficult.

“Even though they’re not here, they’re definitely trying to help as much as they can and I’m looking forward to whenever I get to see them again,” said Henderson, who planned to take a week off at her home in Florida before travelling to Scotland for the Women’s British Open at Carnoustie Championship Course, which begins Aug. 19.

Teammate Alena Sharp struggled through a 4-over 75 round to finish the event at 5 over to place 49th. Sharp said her mid-range game was her undoing.

“I just felt sloppy. Sloppy iron play and didn’t take advantage of holes where I drove it well,” said Sharp. “I actually hit a lot of fairways.”

Just 23 years old, it’s very likely that Henderson will represent Canada again at the 2024 Paris Games, her third Olympics. She said that playing in the 60-player, no-cut format of the Olympics where finishing in the top three is all that matters requires a different mindset than a typical LPGA event.

“I feel like when you’re playing well here, you’re just trying to go as low as you can and it doesn’t really matter as much how you play,” said Henderson, who then referred to her own 3-over opening round. “But when you do shoot a 3 under in the first round, then it’s kind of like, ‘What do you do from here?’ ... You’re kind of out of it, unfortunately.”

Henderson also hoped that some tweaks would be made to the format of the golf tournaments at the Paris Olympics.

“Maybe they do like some sort of team event, have the possibility to win more than just one medal. I think would be pretty cool,” said Henderson. “I’m not really sure what it would be, but like maybe ‘best ball’ or some different aspects, just to make it a little bit more fun.”

The International Golf Federation moved tee times for Saturday’s final round up to 6:30 a.m. local time to try and wrap up the tournament before tropical weather made play too dangerous.

Groups also started at the first and 10th holes in a push to get the round completed as quickly as possible. Both the Canadians started at No. 10, one group apart, and rain started to fall as Henderson and Sharp finished their rounds.

Play was suspended for 30 minutes shortly after the Canadians submitted their scorecards, with a severe storm approaching.

World No. 1 Nelly Korda of the United States won gold at 17 under overall. A one-hole playoff was needed to decide silver and bronze, with Japan’s Mone Inami besting New Zealand’s Lydia Ko after the two had tied for second at 16 under.

Sharp and her wife/caddy Sarah Bowman were planning to attend the closing ceremony of the Olympics before taking five weeks off to recover from a hectic playing and travel schedule, and will return to the LPGA Tour at the Portland Classic on Sept. 16. Sharp said she hasn’t been to her home in Arizona for more than two days in a row since the middle of May.

“I think I’m just worn out, I need a break,” said Sharp, 40. “I mean, it probably wasn’t the best planning to play so much coming into the Olympics, but I put myself in a spot where I needed to play to keep my (LPGA Tour) card so I’m going to take some time off now and get ready for the next stretch.”

Five takeaways from Friday at the Games
Subscriber content
August 6, 2021 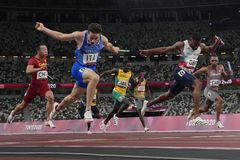 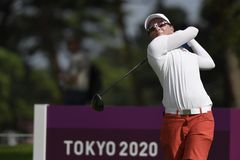