It was a fitting finish to the Tokyo Olympics swim meet – a joyous Penny Oleksiak standing with her arms wrapped tightly around three ecstatic relay teammates, her historic seventh career medal swinging around her neck.

That medal, secured Sunday as a relay team with Maggie Mac Neil, Kylie Masse and Sydney Pickrem in the 4x100-metre medley, was Canada’s sixth in the pool in Tokyo. It made Oleksiak the most decorated Canadian Olympian in history.

She’d been “through hell” these past few years to compete in Tokyo, said the 21-year old Torontonian. She disclosed that a back injury had interrupted her Olympic training, and no one knew about it except those she trains with at the High Performance Centre in the city’s Scarborough neighbourhood.

“I’ve been going through hell and back the past two, three years. And I think these girls kind of saw me struggle through it pretty hard,” said Oleksiak. “To be here and just come out the other end of everything and know that I’m doing good now and knowing that I get to train with these girls moving forward the next three years, knowing that we’re going to freakin’ Paris, and we’re gonna swim. I’m just so excited to see what’s gonna happen with the whole Canadian team.”

As for her back injury, Oleksiak declined to provide any details about it. Coach Ben Titley said it’s been recurring, but it’s been well-managed by her and a physiotherapist.

Her medal Sunday was Oleksiak’s third in Tokyo, and added to the four she took home from the Rio Olympics in 2016 when she was just 16. On Sunday, Oleksiak passed speed skater Cindy Klassen and speed skater/cyclist Clara Hughes – who each had six Olympic medals.

“Once I got my sixth, there was a little bit of pressure on me I feel to get that seventh medal. In my other two races I was, like, really thinking about it,” said Oleksiak, who also had two fourth-place finishes in Tokyo. “On the last race I had accepted it, I have six Olympic medals, I’m not gonna complain if I leave here with six Olympic medals.”

She looked at the floor a little embarrassed as her teammates spoke glowingly about her.

“What she’s accomplished is actually insane and the fact that we get to swim with her and we get to contribute to that is really, really special,” said Masse, who also won three medals in Tokyo. “She’s a legend, and we’re really, we’re really happy for her.”

Trust me at the top it isn’t lonely

Mac Neil wanted in on that, too.

“It just shows that she can step up when the pressure is at its greatest,” said Mac Neil, who also earned three in Tokyo. “That’s when it matters most and it comes down to who’s the best on the day and that usually is Penny.”

It was the final flourish for the Canadian swim team as it matched the six-medal performance from Rio.

Penny Oleksiak shows up when it matters, and that’s why she’s Canada’s greatest summer Olympian

On Sunday, Masse led off the relay for Canada, and the backstroke specialist had her team in the lead after her split. Pickrem, their medley specialist, stepped up for the team and took the breaststroke leg and fell back in the race a little, but still kept the team in medal position. It was a remarkable bit of teamwork for an athlete who thought she was doing three individual events in Tokyo, but did just one, plus two relays, after being asked to focus on that for the team.

Then came butterfly gold medalist Mac Neil to surge through the water to keep Canada in third. Then came Oleksiak for the anchor leg, holding off hard-pushing China, which finished fourth.

“I might not be a 100 breaststroke specialist, but I knew I had to do whatever I can because these girls are the best in the world at what they do,” said Pickrem. “I was definitely really scared and I wanted to do my best for them because I did feel like a weak link. But they never made me feel like that and they definitely brought me to the forefront and they helped me get my first Olympic medal.”

Canada’s swimmers carved out their glory moments in an Olympic swim meet dominated by superstars such as American Caeleb Dressel and his five gold medals, and the hard-charging Australian women’s team, including Emma McKeon, who claimed seven medals.

Canada had a team of 26 swimmers in Tokyo. By comparison, Australia’s team had 35 swimmers and the U.S had 53.

Swimmers competed in perhaps the loudest venue so far at the Games. Despite there being no fans, teams of swimmers sat in the stands, grouped by country decked out in team colours, some blowing horns and thwacking thunder sticks. Some distanced themselves with buffer seats between people, but most didn’t bother, overcome with excitement as they sang and cheered and waved their flags.

The swim times were lightning fast – new Olympic records were set in 19 events.

For Canada, the ride began with their thrilling silver medal in the women’s 4x100 freestyle relay – Canada’s first medal in Tokyo – as Oleksiak propelled the team onto the podium with her fierce finishing power.

Then Mac Neil roared to gold in the 100-metre butterfly with a ferocious seventh-to-first surge after the turn.

Oleksiak earned bronze in the 200-metre freestyle event, and Masse a pair of silver medals in the 100-metre and 200-metre backstroke.

Day after day, they set new Canadian records. In many races where they narrowly missed the podium, they still lowered the national records, including fourth-place finishes in Oleksiak’s 100-metre freestyle and the 4x200 freestyle relay.

Taylor Ruck (backstroke) and Kayla Sanchez (freestyle) also received medals in the 4x100 medley relay event for teaming up with Pickrem and Mac Neil to swim the heat and qualify Canada for the final.

Counting all the swimmers who participated in a heat for the medal-winning relays, 15 medals will be returning to Canada – all from the swimmers who trained with Titley at the High Performance Centre in Scarborough.

“There’ll be 15 medals going back from here to different communities, different families and friend groups from the group that trains there out of Toronto,” said Titley. “I think that is a probably historic achievement, I would think out of one program, and I don’t just mean in Canada. I would think the world.”

The group was especially proud, considering Canada’s strict pool closings and physical distancing during the COVID-19 pandemic interrupted their training schedule and prevented them from competing, while many countries were affected much less.

The four women never removed their arms from one another’s shoulders as they answered questions for a long while in their matching track suits, several of them sporting red and white nail polish. They laughed and finished each other’s sentences. At one point, they corrected Masse when she mistakenly likened her move to train with them to a “360-degree” change.

“We also haven’t been in school,” quipped Pickrem, as everyone broke out in laughter.

The next Olympics – in Paris – is just more than two years and 11 months away. The momentum won’t stop. They’ll have national trials next April, a world championship in May and a Commonwealth Games in July. It’s easy to keep this group together.

“I’ve grown a lot as a person in the last five years,” said Oleksiak. “I think we’re all so supportive of each other when someone else is going through a tough time. ... Having a team that’s that professional, that empathetic, that amazing, you don’t see that anywhere else in the world.” 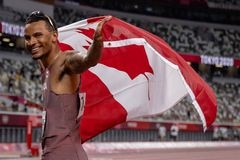 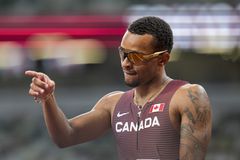 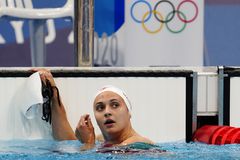