It was sold as a heartwarming story of a woman making good in a man’s world. Except Humphries wasn’t quite good enough. She didn’t meet the base requirements set by Bobsleigh Canada to qualify on the men’s circuit.

Nonetheless, Humphries expected Canada to do her a solid and qualify her anyway.

“I don’t feel as one of the best athletes in this sport that I should be questioned as to what’s best for my personal learning curve,” she said at the time, in 2015.

That’s a lot of ‘I’s’ and ‘my’s’ in a sentence about a team sport. It was difficult not to get the impression that Humphries was racing for herself, rather than for Canada.

Despite the clash, Humphries wore the Maple Leaf once again in Pyeongchang. She won bronze.

The ultimate goal of the suit appeared to be severing her athletic connection to the country that financed that personal learning curve for a lot of years.

Humphries demanded a court release her from her obligations to Canada, allowing her to compete for the United States. Getting to the next Olympics would still be a major hurdle. That would require Humphries obtaining U.S. citizenship. But being allowed to leave was the first step.

On Tuesday, a Calgary judge scuppered the plan for now, ruling that Bobsleigh Canada has the authority to determine whether one of its athletes may decamp for another national team.

Afterward, Humphries’s lawyers described the stand as “unsportsmanlike,” according to the CBC. Which is a bit rich. Amateur athletes love to talk about the special honour of representing your country. They especially like to do so at the Olympics. It’s a feature of every medalist’s postcompetition news conference – that moment they eulogize Canada and speak of their joy in having made the country proud.

And they do do that. All of them. The winners, losers and everyone in between. Along with astronaut and Nobel Prize winner, there is no higher mark of professional distinction than being able to call yourself an Olympic athlete.

That comes with a price.

Competing in the Olympics is a form of national service. You’re not doing it for your own aggrandizement. You’re doing it for the greater glory of the collective.

As such, it’s not the higher, faster and stronger that make Olympians special. Lots of people everywhere are jumping super high and running really fast all the time. You can turn on an NFL game or Wimbledon and watch them do it on the regular.

What makes Olympians special is this core aspect of selfless duty. The athletes don’t do this for money (or, at least, very little of it) or fame. They do it for country.

If every individual instance doesn’t always meet that high standard, that doesn’t make it any less the standard.

It’s the reason all of us tune in to the Olympic 100-metre final and far fewer of us watch professional sprinting. Same distances; same athletes; very different stakes.

Usually, it’s a good bargain for the Olympian. Once someone has competed under the rings, they maintain a soft glow for the rest of their lives. Their country owes them a debt of gratitude. Their neighbours admire them. It is as if they went to war, without the hassle of being shot at. Should the competitor win something, the effect is amplified.

But there are restrictions as well. Amateur athletics isn’t a free market. You don’t get to go where you want, train with whomever you want, tell other people exactly how you want to compete and under what circumstances. Most important, you don’t get to go country shopping like a head hunter looking for the best package of perks.

This is the difference between an amateur and a pro – one trades worldly things in order to become a national hero; the other makes the same deal in reverse.

Occasionally, you can have both. This isn’t one of those occasions.

Fair is a loaded word, but, yeah, it is. It’s more than fair. It is absolutely necessary to maintaining the integrity of the operation for everyone not named Kaillie Humphries.

Humphries has had a remarkable career. It would not have been possible without Canada. You can’t practice bobsledding in your basement as a kid. You can’t learn to bobsled in gym class.

This country built the infrastructure and provided the training that allowed her to have two golden moments. Canada turned Kaillie Humphries into a star. All she was asked to do in return was represent the 30-odd-million people who bankrolled that opportunity.

Many other top Canadian amateurs have worked just as hard, and enjoyed far less reward for their efforts. Many have suffered the disappointment of just missing out on an Olympic team or finishing fifth or 15th when they’d hoped for better. You don’t see them looking to swap national anthems.

In the end – whether it’s amateur or pro, country or team – it’s nearly impossible to keep a top athlete who is determined to leave. The effort is more trouble than it’s worth.

So Humphries may end up a bobsledding Greg Rusedski – flipping countries because it was convenient, not realizing how rarely that works out.

Because no one admires a turncoat, not even the people who get the benefit of their service.

But it’s a cynical world, so it’s possible Humphries gets fast-tracked for that U.S. passport. It’s possible she ends up at Beijing 2022 in U.S. colours. Another podium is possible, too. She is undeniably talented.

But that theoretical future medal would be very different than the others she already has.

The first three made her a hero.

All that fourth will make her is a winner. 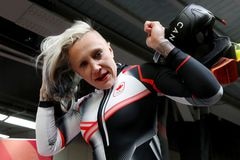 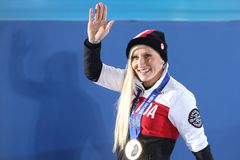