Elite swimmers believe that if they’re out of the water for an extended period of time they’ll lose a feel for their stroke. That’s why Canadian Olympian Kylie Masse went to extreme lengths to keep that sensation in the early days of the COVID-19 pandemic.

Masse went back to her parents’ home in LaSalle, Ont., in the spring of 2020 when the first wave in Canada shut down pools and any kind of group training. Once it was warm enough to open the backyard pool the two-time world champion tied a tether to the fence so she could swim static every day for a span of weeks.

“I was fortunate to have that because just having access to the water is so important in our sport,” said Masse. “If you’re out of the water for three days you kind of lose the feel for the water a little bit.

“So having not had that for a while and then having access to my backyard pool was really, really helpful.”

Masse said that training on a harness is completely different than swimming actual laps in an Olympic-sized pool. Obviously, there are no turns when tethered and no split times. Masse also said the tether would effect her balance and body position in the water.

But getting back that feel of being in the water after months off because of the pandemic was priceless to Masse.

“It isn’t comparable to what we normally do but at the same time, just being in the water and feeling the water and even just kicking statically or sculling gives you that sense of feel for the water that you that you need to build off of,” said Masse.

A member of the University of Toronto’s swim team, Masse and varsity head coach Byron MacDonald agreed that she should leave the program in mid-June because the school’s pool remained closed. That allowed her to start training at the Toronto Pan Am Sports Centre, sharing the pool and weight room with other swimmers on Canada’s national team.

“It was tough to be in a new program, having a new schedule, and doing different sets, and just different weight program and different everything,” said Masse. “But at the same time, I was very fortunate to be in that incredible group, and to be welcomed into that incredible group of athletes and coaches and support staff and have access to the resources at the National Centre to help me on this journey.”

MacDonald said that of the hundreds of elite swimmers he’s coached over his career Masse has distinguished herself with her consistency both in and out of pool. He thinks that steady nature has helped her to thrive under the pressure of high-leverage situations like national competitions.

“She is so self-driven. She does not demand special attention,” said MacDonald. “She’s very, very humble. You would never know that this woman is one of the finest athletes in the country in any sport.”

Swimming Canada invoked an unforeseen circumstances clause in January to nominate a half-dozen athletes in events in which they excel. Masse made the list in the women’s 100- and 200-metre backstroke.

Although it was a relief to pre-qualify for Canada’s Olympic team, Masse said that her unconventional training program – starting with being tethered to a fence post in her parents’ backyard – improved her mental toughness.

“I’ve been able to get a better grasp of handling (the uncertainty of the pandemic),” said Masse. “I’m trying to balance that and not get too high on the highs and don’t get too low on the lows.

Masse will begin her Olympics on Sunday with the 100-metre backstroke at the Tokyo Aquatics Centre.

At the Tokyo Olympics, Canada’s swim team is taking a deep dive into the data pool
Subscriber content
July 22, 2021

Penny Oleksiak bears the hopes of a nation in Tokyo – and that’s just fine with her
July 18, 2021 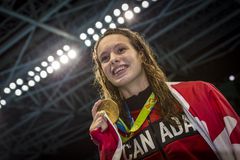 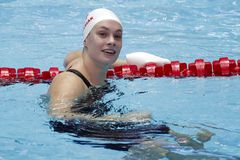