Nikola Girke was done with competitive sailing after a disappointing outing at the 2016 Rio Olympics.

She’d competed at four Games in three different disciplines and, while the results hadn’t been what she’d hoped for, Girke was ready to retire.

“I needed a break after 15 years of full-time, competitive training and sailing and competing,” she said. “I was mentally and physically done. I just needed to recuperate.”

Time has shown that she wasn’t done after all.

After taking a three-year leave from the sport Girke, 43, is ready to compete in women’s windsurfing at the Tokyo Olympics.

Getting back on the board marks a return to the discipline the native of West Vancouver competed in both at the 2008 Games in Beijing and 2012 in London.

Girke made her Olympic debut in the two-person dinghy in Athens in 2004 and competed in mixed multihull in Rio in 2016, where her teammate Luke Ramsey fell ill.

The tough experiences at the London and Rio Games left Girke “mentally not in a good place.”

“I left disappointed or gutted or devastated in a sense,” she said. “I retired, but in the back of my head, I always thought I didn’t want to end my career that way.”

After Rio, she turned her attention to her executive coaching business, Own Your Podium, where she helps individuals achieve their goals. She continued paying attention to the sailing world, however, and in September of 2019, saw there was an chance for Canada to qualify for the Olympics.

“I had just finished a massive garden renovation project where I became very fit and strong and had good calluses on my hands, which are very important for windsurfing. So I thought ‘Hey, why not?’” Girke explained.

Much of her life had changed since competing in Rio and, with her identity no longer tied to being an athlete, she relished the idea of seeing whether she could still compete at the sport’s highest level.

“I wanted to enjoy the process and have fun. Because I was coming back, I didn’t have that pressure on me. I didn’t have sponsors, I didn’t have anyone who I had to live up to their expectations. It was my own,” she said.

“It was something I was doing in addition to my life rather than it being solely my life, and having my ups and downs dictated by how I would perform.”

To get back up to peak competition shape, Girke went to Brazil to train in December 2019.

“I went from not windsurfing in quite some time to a full Olympic training program for a couple of months,” she said. “I think my body took a beating but it recovered quite well.”

The hardest part was rebuilding much-needed calluses on her hands and feet. For the first few weeks, her extremities were marred by open wounds, a particularly painful condition with the ever-present sand and saltwater.

Girke returned home just before COVID-19 swept across North America, throwing the plans of thousands of elite athletes into tailspins.

Her training regime didn’t change drastically during the pandemic, but the competition schedule was constantly in flux. Girke would gear up for a race only to see it postponed or cancelled again and again.

“It was a bit of a mental waiting game or a hurdle to overcome, to just be on but not fully on all the time,” she said, adding that she turned to her training as an executive coach to help weather the uncertainty.

Everyone heading to Tokyo is in a similar spot after navigating the challenges of a global pandemic en route to the Games, Girke noted, though athletes from some countries have been travelling and competing, while she’s largely been stationed at home in B.C.

She plans to rely on her previous experience to make up for her lack of racing over the past year. She also hasn’t set a specific goal for results, so she doesn’t have the same pressure or expectations she’s felt before.

Heading into her fifth Olympics, Girke feels her story shows that athletes can be versatile. After all, she’s competed in three very different kinds of sailing over a 17 year stretch.

“You don’t have to stick with what you learned in youth,” she said. “You can switch back and forth, be adaptable. You can continue to learn and grow.”

Perhaps it’s a lesson is not only for sailing, but for life, too. 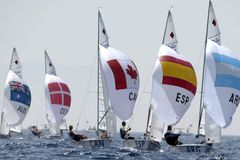 Provan, Girke earn right to compete in Athens
June 19, 2004
Report an error
Due to technical reasons, we have temporarily removed commenting from our articles. We hope to have this fixed soon. Thank you for your patience. If you are looking to give feedback on our new site, please send it along to feedback@globeandmail.com. If you want to write a letter to the editor, please forward to letters@globeandmail.com.
Comments