Danielle Lawrie has been away from her husband and two daughters for the past 73 days, and she wasn’t about to come home without an Olympic medal to show for it.

That’s exactly what the veteran pitcher thought to herself on Tuesday when she got nervous before taking the circle in the last inning to hold a one-run lead and help Canada make history.

The Canadian women’s softball team beat Mexico 3-2 on Tuesday at the Tokyo Olympics to claim the country’s first Olympic medal in the sport.

It was fitting that Lawrie provided the final two strikeouts of the game. She had been on the 2008 team that finished fourth and missed the podium at the Beijing Olympics, and then softball disappeared off the Olympic program.

She was a youngster back then, and didn’t pitch as much as she wanted to in those Games. The 34-year-old stepped away from softball for a while – had a family – then decided to make a comeback and try again with Canadian teammates she adores. This time, she got the ball in the late innings of the big game, and she was clutch.

“It was all for a hopeful moment like that,” an excited Lawrie said after the game, the Olympic credential around her neck covered in pins from an unforgettable time in Tokyo. “We really love each other.”

Lawrie, whose hometown is Langley, B.C., confirmed that this was her final game, and so, too, did 34-year-old Jenn Salling of Port Coquitlam, B.C., Canada’s best hitter in these Olympics and another holdover from the 2008 team. Salling called this the best team culture she’s been around.

“I cannot put into words how much this ending means to me, doing this with this group of women,” she said.

The team spent much of the past four months together training, most of it away from family. They kept images of Olympic medals as screensavers on their phones and laptops to remind them of their goal.

Lawrie marvelled at the grind of these players. Take Toronto-born Victoria Hayward, who joined the team in 2009 and never had an Olympic opportunity to dream about until recently. Take Sara Groenewegen, a British Columbian who just three years earlier was given a 3-per-cent chance to survive after contracting Legionnaires’ disease.

Canada had to bounce back after a crushing 1-0 loss to Japan this week that cost them a spot in the gold-medal game. Instead, Japan and the U.S. get that opportunity. The Canadians took some time to think about it, then circled up in a tight group near their team bus to talk it through and flush it away.

“We were more than capable of being gold medalists, so that was tough,” Salling said. “But we talked about it as a group, like there’s business to take care of, and history still to be made for Softball Canada. It’s not gold or silver, but we still have a chance to make history.”

Still, at field level, the game didn’t lack for noise and atmosphere. Female voices whooped and chattered and whistled loudly – the precious and excitable last moments together on the field for a group of women in the tournament of a lifetime.

Wind swirled and grey clouds covered the sky all afternoon, periodically opening up with rain. The players seemed not even to notice.

Canada opened the scoring when third baseman Emma Entzminger of Victoria punched a two-out single that brought in two runs for Canada in the bottom of the second inning.

Mexico fought back and tied the game in the fifth inning. Then Kelsey Harshman, from Delta, B.C., helped Canada steal back the lead in the bottom of the fifth by cracking an RBI sacrifice fly to score Janet Leung from third.

As Lawrie executed her final strikeout, her teammates were visibly bouncing with anticipation. When it was official, the red-shirted Canadians spilled onto the field in jubilation around Lawrie. They laughed, cried, smiled and broke into hugs. They posed with their Canadian flag and bellowed loudly while snapping team photos.

The team lingered on the field a long while, savouring their final moments there before softball slips off the Olympic program again.

Softball and baseball were back in these Olympics for the first time since 2008, but the sports are not sticking around. They were added just for Tokyo, owing to their popularity in the host country. Both sports are off the program for the 2024 Paris Olympics, and it’s unclear whether they could return for 2028 in Los Angeles or beyond.

Lawrie said she hopes her daughters, who stayed up late to watch the game back home in Seattle, remember this for years to come.

“I wanted my daughters to see, like, if Mom can do something that sets her heart on fire, why can’t I?” 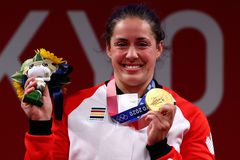 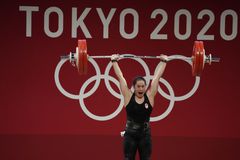 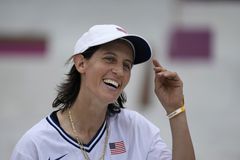 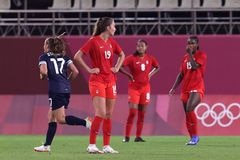