It became clear on the first big day in the pool on Sunday that the Tokyo Olympics have a problem. Well, another one. This time it’s grasping reality.

We know far too much about the precautions taken to prevent spread of COVID-19, especially as it pertains to the athletes village.

Plexiglas eating cubicles. Sexless, cardboard beds. Constant testing and retesting. Through constant reminding, we’ve been convinced that Japan is not kidding around on this coronavirus thing.

Then you look up in the “crowd” as the first Olympic swimming finals get under way.

About 200 or 300 athletes, coaches and officials have taken up all the best seats. They’re lumped together by country. Some are the requisite seat away from each other (e.g. Canada). Some very much are not (e.g. the U.S.).

As things kicked off with the first introductions of the swimmers, the various sections began to cheer. Not just letting out a little, “Woo.” But up out of their seats hooting and whistling. Some people had air horns. The Americans had thunder sticks. The Russians brought a drum.

Once the races got properly under way, the masks started coming off. The boosters in the stands began pogoing in place. They hugged when their woman or man won. Then they started it all over again.

When a Japanese competitor was introduced, the Japanese went bonkers. When the Americans won, they chanted “U-S-A. U-S-A.” The French had soccer cheers. The Germans had a cheer captain.

When an out-of-nowhere Tunisian teenager won gold in the medley, cameras swung to a single Tunisian in the stands, mask off, bellowing like Hercules right after the 12th Labour.

At first, the camera operators were happy to have something other than bodies splashing in water to focus on. But as the session wore on, those shots abated. Someone had figured out how this was looking.

On the one hand, it was delightful to finally feel some atmosphere at the Tokyo Games. An aquatics centre has great acoustics. A couple of hundred people can make a lot of noise. In terms of the live experience, this was the first time these Olympics felt Olympic.

On the other hand, what are we doing here?

Are we worried about COVID-19 or not? I’m always a little confused, but I’m very confused now.

If the athletes are permitted to whoop it up in the stands, why weren’t the Japanese people invited to attend an event they paid for?

A third of all Japanese have one vaccine dose. A quarter are double-vaxxed. Why weren’t those people given a chance to show up? Maybe they wouldn’t be so dead-set against this tournament if they had been invited to participate.

Why weren’t the parents, spouses and infants of the athletes allowed to come to Japan (unless the Court of Arbitration for Sport waved its big stick)?

If the point of this is money (it always is), why weren’t sponsors and advertisers invited?

Some of these decisions seem arbitrary, others self-defeating. Watching the stands at swimming on Sunday, they all seemed ridiculous.

Opinion: No one seems bothered that COVID-19 has arrived at the Tokyo Olympics

How do you stage a farce?

First, you create a backdrop of hysteria. Next, you make it as difficult and unpleasant as possible for everyone who’s coming, knowing full well they will come regardless.

You establish your props: temperature checks, hand-sanitizer stations, security guards at the hotels, phone apps that track the new arrivals and snitch lines.

And then, having sufficiently covered yourself, you let everyone do whatever they want. If anyone calls you on it, you point the finger back at them. Hey, we told you not to do that, didn’t we?

The medal ceremonies are perhaps the most delightful example of this absurd double standard.

During the ceremony proper, the athletes are masked. The second- and third-place finisher are so far apart they’re stuck waving to each other like they are on passing ships. The medals cannot be hung around necks, but must be taken in hand by the winners.

But on Sunday, whenever the music dipped, signalling a wrap, most of the medalists took their masks off. A few hugged like long-separated lovers. Most wrapped their arms around each other and took group photos.

Two Americans, Chase Kalisz and Jay Litherland, both without masks, repeatedly embraced forehead-to-forehead in a show of pure joy. It was lovely.

Then, presumably, they went back to the village to relive their triumph through Plexiglas shields in the athletes’ cafeteria. Because of safety.

When asked about it afterward, Kalisz bristled.

A Tokyo official “had a sign that said, ‘Mask On’ and ‘Mask Off,’” Kalisz said. “If I had my mask off, it was because some guy was holding a sign.”

Having spent just a little time experiencing what has been passing for organization here, that checks out.

Now we take the next important step in public safety: yelling at each other on social media about it. Just like people yelled at the poor Tajiks for not wearing their masks in the opening ceremony. You think that’s contagious? Get those Tajiks over to the pool so they can see what a real contagion vector looks like.

Upon arrival at the Tokyo Olympics, common sense is nowhere to be found

You can’t change the conversation. That will always be stupid when it comes to the pandemic. But you can change the mood on the ground.

Accept that if anyone here has COVID-19, despite all the precautions, that horse has slipped the barn. For God’s sake, stop pretending to care.

If people want to cheer, let them cheer. If they want to hug after the biggest moment in their lives, let them do that. Ask that everyone who is here be as cautious and respectful as possible, and then stop hassling them.

Because there are two Olympics going on right now – the one Tokyo wants the Japanese people to think is happening, and the one that actually is. Neither of them is “safe,” but only one of them is fun. 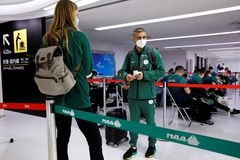 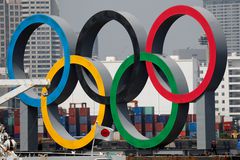 Opinion
No one seems bothered that COVID-19 has arrived at the Tokyo Olympics
July 19, 2021 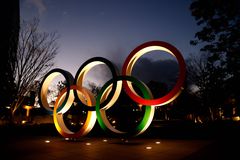