If you find yourself watching a replay of the men’s 200-metre race, the one where Andre De Grasse wins gold, take a moment to close your eyes. Hear the sound of Mr. De Grasse clacking his feet into place on the starting blocks. Listen as silence descends before the starting gun. Take in his shouts as he crosses the line first – and his words with Noah Lyles, the U.S. sprinter he has just relegated to third place, as Mr. Lyles gives him a hand up.

This is an Olympics unlike any other. Stadiums gape with empty seats. Family members remain thousands of kilometres away. The noise of the crowd has given way to an echoing quiet.

But for those watching – and listening – at home, the Tokyo Games have brought the competition to televised life in a way never before possible. In hushed stadiums, microphones have picked up sounds as faint as the heartbeat of gymnasts. On sailing courses, smartphones connected to a dedicated cellphone network have brought live images from the water. In the International Broadcast Centre, ultra-high-definition images charge through an internet connection with more bandwidth than the city of London – or the entire country of Libya.

By the time the Tokyo Olympics is over, Yiannis Exarchos, the chief executive officer of Olympic Broadcasting Services (OBS), says it’s likely that the two weeks of competition will have produced more than a million hours’ worth of broadcast around the world – enough to fill 114 years of television.

The Olympics may have started as a platform for athletic achievement. Today it is, at heart, the world’s biggest reality television show – backed by an immensely complex production. A work force of 16,000 broadcasters puts out the Olympics, half of them with OBS, which gathers and distributes the images and sounds of the Games to networks around the world.

The production of the Games is a study in superlatives. In Tokyo, OBS is using 1,049 cameras, a fifth of them equipped for time-melting slow motion that turns replays into frame-by-frame studies of human effort and emotion. Cameras are mounted to boats and vehicles, helicopters and zip-line-style cables.

But this Olympics, in particular, is more than a visual feast. The COVID-19 pandemic that has emptied seats at the Tokyo Games has made way for an auditory spectacle. With few crowd sounds to drown out the athletes, Tokyo has let Games broadcasters “create an audio environment to represent the sheer physicality of sports in audio terms,” Mr. Exarchos says in an interview.

Technicians have installed 3,600 microphones across the 42 venues of the Tokyo Games. They are positioned in electric cars to capture the sounds of cycle races. They sit shoreside at rowing events, bringing each oar stroke to life. They are installed inside the vaults that spring gymnasts into competition. They are tucked in nets and buried in sand.

“Eyes tell you what is objectively happening. But ears create more of a sense of emotion,” Mr. Exarchos says.

It was the sound of Gianmarco Tamberi and Mutaz Essa Barshim agreeing to share a high-jump win – “Can we have two golds?” Mr. Barshim asked an official, before the two men erupted in jubilation – that provided one of the defining moments of these Games.

Sound matters, too, for athletes, which created one of the more vexing questions for organizers as they contemplated holding an Olympics empty of spectators. “Big sporting venues are not designed to be empty,” Mr. Exarchos says. The metallic, reverberating sound of competition inside a venue without anyone in the seats is like “stepping into a thriller,” he says. “It’s not really the friendliest of places for athletes.”

To compensate, technicians sampled the ambient audio of sports played before big crowds in the 2016 Rio de Janeiro Olympics – a volleyball game sounds different than table tennis – and have played those back as background noise in Tokyo’s empty venues. The intent is that “you don’t have psychologically the feeling that the venue is empty,” Mr. Exarchos says.

For television viewers, meanwhile, audio engineers have made use of their plentiful microphones to emphasize the sound of those few in attendance at Olympics events. Take basketball. Each team has a bench full of people, and “they make noise. They are humans. They react. So what we have done is small adjustments to capture the sounds from those people,” says Nuno Duarte, the senior audio manager for OBS who won an Emmy for his work at the 2012 London Olympics.

Among the advances at the Tokyo Games is the use of immersive audio, which reproduces sounds from in front, behind and above – a technology that underpins what some manufacturers have called spatial audio. To collect it, OBS developed an eight-way microphone that looks like a black metal egg pricked with straws – technicians dub it a doomsday device – that dangles high in Olympic venues to capture sound from all angles. It can recreate the sounds of the Games as never before, although only for those few with the home audio equipment to reproduce it.

What anyone can hear, though, is the sounds of competition in Tokyo.

Without the roar of big crowds, “we can actually have sounds from athletes running that we have never had before. So these are very special Games,” says Arttu Horttanainen, who supervises the audio team at athletic events, which are held at the Olympic Stadium. It is peppered with 87 cameras, enough to capture every stumble and photo finish.

It has also been fitted with 500 microphones, enough to recreate an audible tapestry of competition at some of the most-watched Olympic disciplines.

Those sounds don’t always come through. They can be masked by stadium announcers or television commentators.

But microphones mounted along the track can pick up the footfalls of sprinters – along with their sighs of dejection and shrieks of joy at the finish line. In pole vault, one microphone is hidden near the box where the tip of the pole is wedged as the athlete soars. Another sits perched near the bar, metres above the ground. Another is tucked into the mat, recording the thump of a landing. Two more capture the reaction of the athlete on the mat.

“If you listen very closely, you can hear what athletes are doing when they are up in the air six metres above,” Mr. Horttanainen says.

“We enjoy bringing viewers those little details,” he says. “Because that’s one thing you never really will hear anywhere else, other than on TV.” 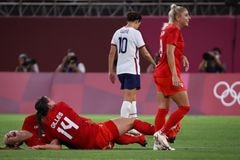 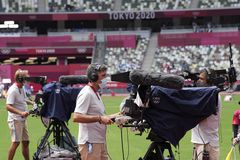 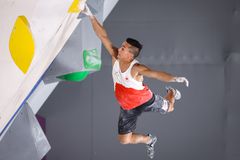