Canada’s equestrian jumping team is likely to lose its invitation to the 2020 Olympics in Tokyo after rider Nicole Walker tested positive for a banned substance, cocaine, at last summer’s Pan American Games, a result she blames on coca tea.

Ms. Walker, 26, was a top performer at the Pan Am Games in Lima in August and her scores helped the four-member show-jumping team qualify for the Tokyo Games. On Tuesday, regulators at the Fédération Équestre Internationale (FEI) in Switzerland announced Ms. Walker is provisionally suspended from the sport after turning in a positive result for benzoylecgonine, a chemical produced when the body metabolizes cocaine, from a test administered in Lima on Aug. 7, after the finals of the jumping competition. Canada placed fourth in the event.

Ms. Walker, the daughter of businesswoman Belinda Stronach, has appealed the finding. If Panam Sports upholds her positive test, her scores from the Lima Games will be dropped from the team’s total, and the Canadian equestrian team will no longer qualify for the Olympics, according to people close to the equestrian team.

Ms. Walker declined to comment but said on Tuesday in an Instagram post: “I was shocked and devastated to hear about these results. I do not use illicit drugs, ever.”

She continued: “My Canadian teammates, my team in the barn, our horses and I, have all put a lifetime of effort toward an Olympic goal and I would never do anything to jeopardize that for my teammates or for myself.”

The stakes are high for the team, as the positive doping test and a cancelled trip to the Tokyo Games would mean cuts in funding from the Canadian Olympic Committee and the potential loss of corporate sponsors.

Ms. Walker is royalty in horse circles. She went into the Pan Ams as reigning Canadian show-jumping champion. She is also the daughter of Don Walker, chief executive officer of auto-parts maker Magna International Inc., and his former wife Ms. Stronach, both of whom made supportive statements on Tuesday. Ms. Stronach runs a global horse-racing business built by her father, Frank Stronach, a prominent racehorse owner and Magna’s billionaire founder.

According to multiple people in the equestrian community, Ms. Walker is a hard-working and grounded athlete who does not use recreational drugs.

“Nikki is focused, dedicated and has enormous integrity,” Mr. Laskin said in an interview on Tuesday. He said the entire squad has supported Ms. Walker since she informed them of the positive test earlier this fall. “Nikki would never knowingly do anything to jeopardize her career or the team," Mr. Laskin said.

The FEI said on Tuesday that Ms. Walker exercised her right to request an appeal hearing before the Panam Sports disciplinary commission. “Once the disciplinary commission has made a decision on the disqualification of the athlete, and Team Canada’s final placing, the FEI will be in a position to make any necessary reallocation of the Olympic quota place,” the Swiss body said.

Teammates are rallying to Ms. Walker’s side and accept her explanation for the failed drug test. “I am a very big fan of Nikki Walker. She is a very serious and highly disciplined equestrian rider,” said equestrian veteran Ian Millar, who has represented Canada in a record 10 Olympic Games.

“She has represented Canada with honour and distinction. There is zero, and I mean zero, chance of Nikki ever putting herself or her teammates in harm’s way," he said.

In Lima, Ms. Walker placed fourth among 50 Pan Am riders, the best individual performance on a veteran Canadian jumping team and critical to carrying the entire squad to next summer’s Olympics.

Over the years, Canadian equestrians have won five Olympic medals for jumping. The Tokyo Games could potentially be an emotional experience for the group, as three-time medallist Eric Lamaze is hoping to compete as an individual athlete after announcing this past summer that he is dealing with a brain tumour.

Prior to the Lima Games, Canada’s athletes were warned that they are responsible for everything they ingest. Inadvertently breaking the rules has cost Canadian athletes in the past. Rower Silken Laumann and three teammates lost their Pan Am gold medals in 1995 after Ms. Laumann turned in a positive drug test from taking an over-the-counter cold medication.

In late September, Panam Sports said in a news release that 15 athletes tested positive for a banned substance. The body has already disqualified seven of the athletes for doping at the Games – three were stripped of gold medals – while athletes, including Ms. Walker, appealed the other eight tests.

The appeals are expected to be resolved by the end of November.

“Nikki is an outstanding team member and I am more than certain there is another explanation for this positive test,” said Mr. Laskin, but he added it is unclear how a positive test result that came from drinking coca tea would be viewed by regulatory bodies such as Panam Sports and FEI.

Coca leaves are the source of cocaine. However, the leaves can also be boiled to make coca tea, known in Peru as mate de coca. It is a legal drink with a mild kick. It is common for Peruvian hotels and restaurants to serve a cup of mate de coca to tourists to combat jet lag and altitude sickness.

Medical studies show drinking one cup of coca tea can result in a positive drug test for up to 24 hours.

For athletes, there’s precedent of positive drug tests from coca tea. In 2005, for example, the Jockey Club in Britain commissioned a study of the beverage after several jockeys tested positive for cocaine and claimed it was a result of drinking coca tea.

Mr. Deslauriers said in a news release that Ms. Walker “is a great teammate – organized, professional, hard-working and always ready to help out. She is an outstanding ambassador for our sport.“

He added: “I believe 100 per cent there is another explanation for these test results.”

Ms. Walker and her horse were the country’s featured jumpers going into the Pan Am Games. “Wearing the red jacket brings added pressure, but it is an incredible feeling to have a whole nation behind you,” Ms. Walker said in a news release this summer.

Ms. Walker delivered in Lima. Her fourth-place finish was just short of bronze – she finished behind an American athlete by less than a two-second margin in a four-rider “jump off” for the final medal. Brazil’s jumping team won gold, while Mexico took silver and the United States went home with bronze. 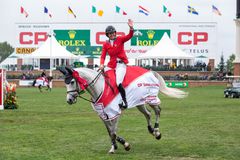 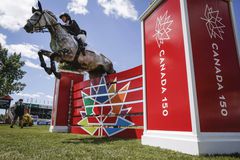 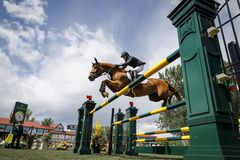