Sunisa Lee came to Tokyo thinking the best she might do was win an all-around Olympic silver, but the youngest member of the U.S. gymnastics team grabbed the gold on Thursday after Simone Biles dropped out of the event over mental health concerns.

With Biles watching from the front row at the Ariake Gymnastics Centre, Lee won the all-around to secure the title for the U.S. for a fifth straight Games on the final rotation – the floor exercise – for a 57.433 winning total.

“Coming into this competition I didn’t even think that I could be competing for a gold medal,” said Lee. “I was coming to compete for a silver medal.

“I knew that I just had to stay focused. I wasn’t trying to worry about the scores at all.

“It’s crazy. It doesn’t feel like real life at all.”

Tokyo Olympics twist: Simone Biles’s legacy may be her courage to look after herself, not the IOC

Surprise package 22-year-old Brazilian Rebeca Andrade, who had topped the rankings most of the evening, took the silver for her country’s first ever medal in women’s gymnastics.

Russian Angelina Melnikova completed the podium by taking the bronze for the ROC.

Jade Carey, who was chosen to fill in for Biles, placed eighth.

“I just wanted to go out there and do the best I can, have a lot of fun and I feel that’s exactly what I did,” said Carey.

Biles, winner of every all-around competition she entered since 2013, threw the fight for the Olympic gold wide open when she decided not to defend her Rio Games all-around title.

She had already dropped out of the team event on Tuesday after one poor vault, citing the need to focus on her mental health.

“Going into this meet I feel like there was a lot of pressure on me because I have been second to her the whole season basically,” said Lee.

“So I knew that people were kind of counting on me to either get second or win the gold medal. I tried not to focus on that because I knew that I would get too nervous.”

In the end the stage was set for another thriller at the Ariake arena that has seen almost every medal decided by the final athlete in the final rotation.

As the gymnasts marched over to the floor, only 0.201 separated the top three of Lee, Andrade and 16-year-old Russian Vladislava Urazova, leaving everything to play for.

Lee, the youngest member of the U.S. team, put down a marker first with a score of 13.700 but she left the door open a crack for Andrade, the second-last to compete, to snatch the gold.

But the Brazilian, who had previously looked so poised, finally cracked by stepping out on her first tumbling run and then did so a second time, scoring 13.666, with the mistakes likely costing her the gold.

As the marks flashed on the scoreboard and Lee’s victory was confirmed, her teammates in the stands leapt and cheered.

“It just means a lot to me to have all of them here cheering for me,” said Lee. “It sucks that I can’t have Simone on the floor with me but just to even have her in the arena was very helpful because she is an inspiration to me that I look up to. Having her there helped me a lot.”

Lee stepped onto the floor with more support than just her teammates and family.

She also carried the hopes of the Hmong American community, of which she is a part.

Lee is the first of the Hmong group that came to the U.S. as refugees from Laos following the turmoil of the Vietnam War to ever reach an Olympics, much less stand atop an Olympic podium.

“They are the most supportive people ever and I just feel like many people from the Hmong community don’t ever try to reach their goals,” said Lee. “It’s very restricted.

“I want people to know that you can reach your dreams and you can just do what you want to do because you never know what is going to happen in the end.

“Don’t ever give up on your dreams.” 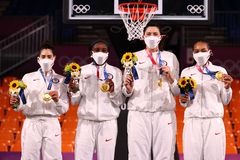 Canada’s women lead charge to Olympic podium in Tokyo, as they did in Rio
Subscriber content
July 28, 2021 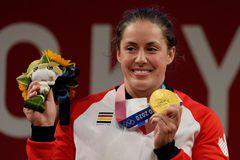