Rachel Brady
Published May 1, 2021 Updated May 2, 2021
Comments
Text Size
Please log in to listen to this story. Also available in French and Mandarin. Log In Create Free Account

As an elite athlete, Kamylle Frenette appreciates the value of meticulously practising. So in her other life as a pharmacy student, she didn’t mind thrusting a needle into the skin of an orange over and over again while learning the skills needed to do a very important job.

The 24-year-old para triathlete from Dieppe, N.B., is training for the biggest competition of her life – this summer’s Tokyo Paralympics. At the same time she’s training to become a pharmacist and a certified vaccinator, hoping to help in Canada’s immunization efforts against COVID-19.

Frenette, a biology graduate from Université de Moncton, is in her third year of the pharmacy program at Dalhousie University in Halifax. Typically students do their injection certification in fourth year, but the school recently included third-year students in order to train more people to help vaccinate Canadians.

Frenette completed her injection-certification course just before the recent lockdown in Nova Scotia. The students first practised by sinking needles into the fruit of an orange or a thick plastic injection pad. Then, using syringes of saline, the students injected each other while teachers evaluated. Now Frenette awaits the certificate that makes her official, so she can help out at vaccination locations if called upon.

“I want to jump in and do my part in helping Nova Scotia and Canada to get past this,” Frenette said.

This year, the run-bike-swim athlete has been dividing her time training, doing online courses and working part-time as a pharmacist’s assistant – wearing a mask – at a drugstore in Timberlea, N.S., helping label and dispense prescriptions. She’s about to begin her clinical rotations, shadowing pharmacists in hospitals and other community drugstores.

She sees people asking their pharmacist about the safety of the COVID-19 vaccine.

One might think her coach would fret about the time and energy Frenette spends on her studies in this front-line occupation, with her Paralympic debut in August nearing. But Canadian para triathlon coach Carolyn Murray says she was fully on board when Frenette outlined her plans, which included getting her job at the pharmacy.

It doesn’t surprise Murray that Frenette – a strong medal contender in Tokyo – hopes to help vaccinate Canadians even as the clock ticks closer to the Paralympics.

“I think it just shows who she is as a person and that she understands that there’s more to life than sport,” Murray said. “Kam is a phenomenal individual who can handle so much.”

It was Murray who approached Frenette in late 2016 about participating in para triathlon, but the talented athlete didn’t take to the idea right away – because she didn’t believe she had a disability.

Frenette was born with a clubfoot. As a baby, she had corrective surgery to straighten the right foot, but everything below her right knee has always been smaller than on her left side. Today, her right foot is two sizes smaller than her left. She also has considerably less power in her right calf, ankle and foot, compared to her other side.

But she grew up playing many sports, including ringette and volleyball. She was very competitive with the other kids, her parents never made her feel as though she had a disability, and she rarely gave a thought to the lingering discomfort in her right foot during exercise or the extra space in that shoe. The family compensated by tightly taping her skate to support her smaller ankle, or by adding an orthotic to fill the large gap in her sneaker. Frenette never considered it a big limitation.

As a teenager, she began to join her father competing in triathalons across New Brunswick. At 18, she did an Ironman. Then, as a biology undergrad in Moncton, she ran on the varsity cross-country team. Murray heard about Frenette’s story from another member of that university team – Shayne Dobson, an athlete with cerebal palsy who competed at the Rio Paralympics in the 1,500 metres.

“I was surprised when they approached me, and my initial reaction was definitely fear because I had just never really seen myself as someone with a disability,” Frenette said. “It took me like a year to really process the idea.”

Frenette underwent classification testing, which is central to paralympic competition. The testing evaluates the athlete’s level of impairment and then groups eligible competitors into classes according to their activity limitations in a certain sport. She learned she was eligible in the PTS5 category for triathlon athletes with mild impairment.

She finally embraced the idea and began competing in para triathlon in 2018, making a few podiums in her first two seasons. She is now No. 4 in the world ranking in the women’s PTS5 category. Although Frenette feels embraced by para sport, adores her Canadian teammates, loves the competitions and trains hard, she sometimes wonders if she belongs. She wrote an editorial for CBC in which she asked, “am I disabled enough to be involved in para sport?”

Frenette believes her experience in para triathlon is influencing her development as a pharmacist. She constantly thinks about how accessible the pharmacy experience is – such as relaying medication information to someone who is vision or hearing impaired, or how to get prescriptions to those with mobility issues.

She also believes studying and working in pharmacy settings during a pandemic has given her invaluable work experience.

It remains uncertain how many Canadian Paralympians and Olympians will be vaccinated before Tokyo. However, vaccinators, such as Frenette, usually get the jab before they can begin injecting others.

These days, Frenette corresponds virtually with Murray, who is in Victoria. Frenette trains at Canadian Sport Centre Atlantic in Halifax, and can still get out to run and cycle. She can’t do any swimming because her local pool is closed.

Murray predicts big things from Frenette at these Paralympics, and again in Paris in 2024. But it’s her personal story that impresses the coach most.

“I think people will find her story uplifting,” Murray said. “We can all use some uplifting news.”

Harry Jerome Track Classic has one caveat: you have to make it to B.C., quarantine to compete
April 23, 2021 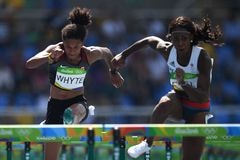 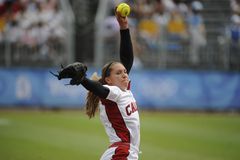