The colour choice wasn’t a coincidence. It was a statement. One Simone Biles felt compelled to make even as the organization she competes for struggles to find a compassionate and compelling message to sexual abuse survivors.

The Olympic champion designed the leotard she wore while winning her fifth U.S. women’s gymnastics title Sunday, all the way down to the light shade of teal. It’s the designated colour for survivors of sexual abuse, a group that includes Biles, who revealed in January she was among the victims of former USA Gymnastics team doctor Larry Nassar.

“(The colour) is for the survivors,” Biles said after becoming the first woman in 24 years to post the top score on every event on her way to a national championship. “I stand with all of them and I think it’s kind of special to unite (people).”

The 21-year-old came up with the idea eight months ago, long before she knew how her comeback following a post-Olympic break would go. In the end, it simultaneously served as a beacon to her otherworldly gymnastics while also highlighting the need to keep the Nassar victims at the forefront.

It’s a balance USA Gymnastics can’t seem to locate. Biles’ electric performance came hours after USA Gymnastics president Kerry Perry spent 22 minutes talking around the fallout of the Nassar scandal without offering much in the way of substance in her first extended public comments since taking over last December.

Perry danced around the question when asked if the organization planned to do anything specific to honour the survivors. Ultimately, USA Gymnastics did not, though Perry said she envisions a day when the organization and the victims stand “side by side.”

It’s already happening, and it has little to do with USA Gymnastics and everything to do with Biles.

She has opted against providing specifics about her experiences with Nassar. In a way, her boundary-pushing gymnastics and thoughtful fashion choice will send a stronger message than any words ever could.

Two years after winning four gold medals in at the 2016 Summer Games, Biles has somehow reached another level. She posted a two-day total of 119.850, more than six points ahead of reigning world champion Morgan Hurd and a full seven points clear of Riley McCusker. Biles’ margin of victory was greater than the gap between Hurd and 11th-place finisher Jordan Chiles.

“She pushes us,” McCusker said. “I’m honestly just in awe of her.”

“It was shocking then (in ‘94) and it’s shocking now, too,” said high performance co-ordinator Tom Forster.

Forster and the rest of the world might want to get used to it. Again.

A year ago, Biles was wrapping up a post-Olympic whirlwind. She basked in the aftermath of her glorious run at the 2016 Olympics in which she brought home a record-tying five medals and entered the “first-name” pantheon in her sport, a club that includes fellow Olympic champions Nadia Comaneci and Mary Lou Retton.

Biles, however, is making a compelling case for a class all her own.

She didn’t get serious about a return until last fall, when she went back into training with new coaches in Laurent and Cecile Landi intent on not just returning to the form that made her one of the stars in Rio de Janeiro but seeing just how far she could push herself and her sport.

Two meets into her comeback, the possibilities are staggering. Her all-around score of 60.1 during the opening round Friday marked the highest in competition since she and Olympic teammate Aly Raisman both topped the 60-point barrier during the all-around finals in Brazil.

Biles worried a bit about her endurance after cramming two meets in a span of three weeks. She wasn’t quite as sharp Sunday as she was Friday — scoring a bit lower on bars and beam — but it hardly mattered. She was so far ahead coming into the finals, she needed do little more than stay upright to finish the night atop the podium.

“I kind of thought I’d be a nervous wreck and maybe fall apart,” Biles said. “Going into these events, I kept telling my family, ‘I don’t know if I’m going to be able to calm myself down the way I did before and handle the nerves.’ But so far, so good.”

Biles will get a chance to add to her 14 world championship medals when she leads Team USA to Qatar in October. Hurd, McCusker and vault specialist Jordan Chiles figure to be on the plane, too. Whoever earns the fifth spot will join a team heavily favoured to continue its international supremacy.

The Americans have won every major international team competition since the 2011 world championships, a run that figures to continue indefinitely with Biles doing things no gymnast has ever done.

“You can’t be that lucky,” Forster said. “So that is just hard work and training and dedication and determination. It’s pretty awesome to witness.” 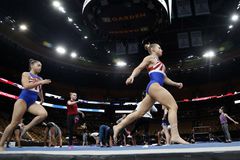 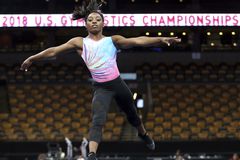 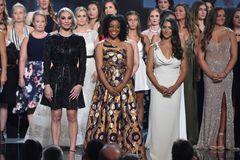