Situation in Tokyo, by numbers

WHAT IS THE OLYMPIC MEDAL TALLY IN TOKYO SO FAR?

WHAT TIME IS IT IN TOKYO RIGHT NOW?

In photos: Canadian Laurence Vincent-Lapointe wins first ever Olympic silver in canoe sprint and other highlights from the Tokyo Olympics

From The Globe’s Olympic team

Japan excels in skateboarding at Tokyo Olympics, even as the orderly nation remains wary of an unruly sport

Nathan VanderKlippe writes that Japan is, suddenly and improbably, a skateboarding superpower. Much like Jamaicans have dominated sprinting, Japanese skaters have dominated the discipline. Now, Japan needs to sort out what to do with the attention the sport has received.

Japan has used strict laws and vigorous enforcement to maintain a meticulous social order. In the world’s biggest city, urban spaces are free of litter, jaywalking and the ills of disorderly conduct – a category that, for many in the country, includes skateboarding. Japan is by some measures demographically the world’s oldest country, and the grey-haired set doesn’t much like something that looks unruly.

From worries she wouldn’t compete to silver in Tokyo: Vincent-Lapointe stands on the first Olympic women’s canoe sprint podium

In the whirlwind of it all, Laurence Vincent-Lapointe needed to sit down.

The newly minted Canadian Olympic silver medallist had just exited her canoe after the race of her life. She was reliving it now with a breathless string of happy words. She paused to grab a chair and get off her feet while talking animatedly to a throng of reporters huddled in the oppressive Tokyo heat. She wore an ice vest, a canoe pendant around her neck and a Canadian flag around her shoulders.

Just months ago, it seemed this 29-year-old world champ would not be allowed to compete in Tokyo when female canoeists made their debut at the Games in Tokyo. But now, here she was, among the very first female paddlers ever to earn an Olympic medal in a canoe.

Andre De Grasse ‘has another decade of sprinting’ in him, his Olympian youth coach says

After Wednesday night’s triumph, no one will count out De Grasse any more. With five medals, he is already the most decorated Olympic sprinter in Canadian history. What more could he still achieve?

“I think Andre has another decade of sprinting in his body,” said Tony Sharpe, the former Olympic bronze-medal sprinter who is credited with discovering De Grasse at a high-school track meet in 2012. Because De Grasse turned professional after only one season running for the University of Southern California in the NCAA competitions, “he didn’t run a four-year college season,” Sharpe said, speaking to reporters at the news conference after Beverley De Grasse’s remarks. “That can put a lot of mileage on a sprinter. So, he’s got fairly fresh legs for a guy that’s winning Olympic gold already. I can anticipate that he should be around for another two or three Olympic cycles.”

Keep up with the latest behind-the-scenes stories and images from the Olympics in our reporters’ notebook from Tokyo.

Check the full Olympic schedule for the latest event times and competitors.

What athletes and teams should Canadians look out for? Consult our guide.

How did Canada’s swimmers use data to get stronger? Grant Robertson and Timothy Moore explain. 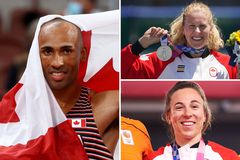