Of all the sports to spark one of the biggest Olympic scandals since Ben Johnson, few would pick badminton.

And yet the sport many Canadians see as something they play in their backyard has unleashed a controversy that rivals the champion sprinter's positive drug test in 1988, and has shaken the core of the Olympic ideal of fair play.

On Wednesday, eight female badminton players from China, South Korea and Indonesia were ejected from the London Games tournament for tanking their doubles matches so blatantly their national Olympic organizations barely kicked up a fuss.

The expulsions included the Chinese team of Wang Xiaoli and Yu Yang, considered the best female badminton players in the world.

Even as those players were being marched out of the tournament, and possibly the Games, allegations were flying about more cheating in women's doubles – and badminton officials were being forced to explain why the sport should remain in the Olympics.

"We live in the world and the world is full of very good things and, sometimes, we have to deal with problems and issues," said Thomas Lund, head of the Badminton World Federation, who added he was "very very sorry it has happened."

He said other sports have had problems, too, and not been expelled.

Among the beneficiaries of the fiasco were Canadians Alex Bruce and Michele Li, who didn't win a set in the preliminary round of the doubles competition but will now finish in the top four.

Both had stayed up past midnight local time Tuesday, believing their Olympics had ended, only to be told late Wednesday afternoon they would be playing in the quarter-finals that evening because of the disqualifications.

Remarkably, they beat a pair from Australia, putting them in a position to win a medal.

"Right or wrong, we're here now. We just tried to really take advantage of an opportunity," Bruce after the victory Wednesday. "It was really just really unfortunate for the sport what happened."

The mess left London's chief Olympic organizer Sebastian Coe, a double gold medalist, calling the events "depressing" and some badminton players saying cheating has been going on for a while.

"We have seen that many times," said Denmark's Kamilla Juhl, who lost in the doubles quarter-finals with partner Christinna Pedersen. "It's so difficult, the situation.

"I've seen it so many times it seems like there is nothing to do about it because the big boss in China, he says, 'You have to win, you have to lose because we have to have three ladies singles, three men's singles, two ladies doubles to the Olympics and so on.' So they have qualified as many players as possible."

Pedersen questioned the fairness of the Canadians moving on, saying: "It's difficult and not fair that some players were in the quarter-final today and they haven't won not even a set. Me and Kamilla [have] been fighting in our group stage to go through to the quarter-final … that's very hard to see."

Many players and coaches blamed the tournament format, saying it was open to abuse.

Unlike tennis, where players are seeded and then knock each other out in successive games, badminton is using a group format for the first time. Under the system, players are put into groups and the top finishers in each pool qualify for an elimination round.

The doubles event consisted of 16 teams, including two teams each from China and South Korea, seeded by ranking across four pools.

The fixing began after Juhl and Pedersen upset the Chinese team of Tian Qing and Zhao Yunlei in the preliminary round, leaving the Danes in first place in their pool and China second.

It meant that in the elimination round, the top Chinese team of Wang and Yu would have played Tian and Zhao in the quarter-final. To avoid that, Wang and Yu purposely lost their final match against a South Korean team Tuesday.

When the South Koreans saw that, they did the same thing in their match with the Indonesians, who followed suit. The result was all four teams trying to lose on Tuesday to improve their chances in the elimination round.

The rigged games prompted a flurry of boos at Wembley arena Tuesday as fans reacted to players purposely striking the birdie into the net and repeatedly ignoring warnings from the referee to play harder.

By the end of the evening, officials from BWF had already begun a disciplinary hearing, with a final decision to eject the players coming Wednesday afternoon.

China and Indonesia did not appeal the decision, while South Korea's appeals were rejected.

Lund said the BWF would review the format and consider moving back to an knock-out style tournament.

Bruce said the format has to go. "It's clear that this didn't work," the Canadian said.

Like many others, she also hoped the scandal hasn't ruined badminton's chances of remaining in the Olympics.

"It's upsetting that it happened at the Olympics," she said. "Hopefully, we can rebound as a sport and prove to the world that badminton deserves to be respected and to be in the Olympics." 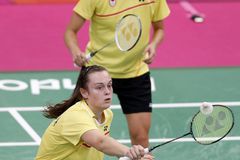 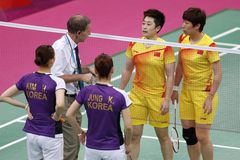