Punctuating a big shot with a noisy celebration feels as good as the shot itself for the Brad Jacobs curling team.

They doubled their pleasure against Norway's Thomas Ulsrud at the Olympic Games on Friday.

Jacobs capped a see-saw seventh end with a double takeout to score four points. They put an exclamation point on it with the fist pumps and roars that are their trademark en route to a 10-4 win over the 2010 silver medallist.

After opening 1-2, the Sault Ste. Marie, Ont., team has strung together three wins a row and played themselves back into playoff contention.

The top four teams advance to the Feb. 19 semifinals when the round robin concludes Monday. Ties for fourth will be determined by tiebreaker games.

The Norwegians — and their loud pants — were occupying fourth before the Canadians took it from them Friday.

"It was huge," Jacobs said. "You always like to beat those guys because they're a great team. They're one of the toughest teams here. They throw the rock really well and to kind of bring them back to where we are, I think is huge."

Reigning world champion Niklas Edin of Sweden moved into first at 5-1 ahead of China's Rui Liu and Scotland's David Murdoch at 4-1 and Canada at 4-2. Norway was 3-2.

Canadian men have played in every Olympic curling final since the sport became an official Olympic sport in 1998. Edmonton's Kevin Martin won gold in 2010 after Brad Gushue's team from St. John's, N.L., did the same in 2006.

The Jennifer Jones team from Winnipeg had the day off after opening 5-0 to top the standings. The Canadian women take on Japan's Ayumi Ogasawara and Russia's Anna Sidorova on Saturday.

Sweden's Margaretha Sigfriddson was 4-1 ahead of Switzerland's Mirjam Ott at 3-2. Four countries were tied at 2-2 in the women's field.

The Canadian men cleared a high hurdle with the win over Ulsrud, but it doesn't get any easier with two-time world champion Murdoch up next on Saturday.

John Shuster of the U.S. and surprising China, coached by Canadian Marcel Rocque, are on deck Sunday. China opened 4-0 before falling in an extra end to Edin on Friday.

The Canadians' burst of emotion was all the more noticeable because Russian fans weren't there turning the Ice Cube into bedlam. No Russian teams were involved in the morning draw, so the atmosphere was more akin to a weekday morning draw at the Brier.

"It has been the quietest," observed Jacobs. "Obviously Russia wasn't out there this morning. It was nice for a change. That crowd is tiring.

"You have to bring more intensity to each and every game here because that crowd is so loud. We almost need to try and be more intense and louder than they are in order to kind of get back to ourselves. That takes more energy than we've ever had to bring any game, ever."

"At the same time we like the Russian fans. Our wives have told us all the Russian fans are taking picture with them and stuff and they have seen them cheering for us a little bit."

Unlike at a Canadian or world championship where teams generally play two draws every day, the Canadian teams often play just once a day in Sochi.

That's fine with the skip, who says each game in Sochi has been emotionally draining.

"One game a day is beautiful," Jacobs says. "You go out and give it everything you've got for three hours. You can worry about relaxing later, crash later. It's exactly what's going to happen with all of us right now."

Jacobs, third Ryan Fry and the front-end brother E.J. and Ryan have a team meeting prior to every game. They've spent some of their downtime playing floor hockey and table tennis in the athletes' village.

"Who is the best ping pong player?" Jacobs said. "The two Ryans were playing against E.J. and I and they smoked us pretty good."

Norway stole a point in the first end. Jacobs threw controlled weight to get past a guard and double off a pair of Norwegian counters in seventh. His shooter stayed in the rings for a bonus fourth point and a 7-3 lead.

Ulsrud mustered a single point in the eighth and when the Canadians scored three in the ninth, the Norwegians shook hands. 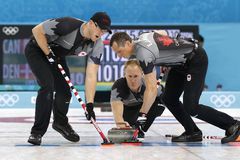 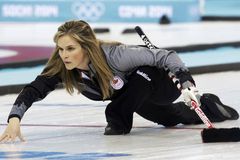