When Jeremiah Brown watched the men's eight win the gold medal at the 2008 Olympics in Beijing, he set a ridiculous goal for himself.

He decided to win a gold medal in rowing, too.

"It doesn't look that hard," he thought. The former linesman for the McMaster Marauders football team had never picked up an oar in his life.

A short time later, he found out differently. He borrowed a single scull, dipped it in the waters of Rice Lake near his hometown of Cobourg, Ont., and tried to teach himself how to row.

He had the oar locks on backward. He didn't get 10 strokes before he fell in. It was to be the first of many dunkings that Brown took on the road to the Games.

But just four years later, Brown is a member of the men's eight, heading to the Olympics in London. "It's the hardest thing I've ever done in my life," the 26-year-old said.

He's accomplished the feat against all odds. He played football, an anaerobic sport. Rowing is one of the most punishing of aerobic sports. He had a full-time job – at least while he was trying to make it onto the national team – and he's a single father with a seven-year-old son, Ethan, to think about.

Brown has had a quick rise through the ranks of rowing, and a dramatic one, too. He sought out former national coach Doug White in Victoria, where Brown had a job with the Toronto-Dominion Bank, and remembers the coach asking him on the first day what his goals were.

White said he was not surprised, somehow. Brown had the right physique, standing 6 foot 6 and weighing 230 pounds. He just had to find out if the young man had the tools.

White said he remembers Brown being in the water a lot. It was a useful exercise to teach him how to get back into the boat.

Eventually, White suggested that Brown do a time trial with the national team at Elk Lake in British Columbia, with coach Mike Spracklen.

"You'll find out very quickly where you are," White told him.

"But he did get out of the water pretty quick," White said.

The key to Brown's steep upward climb is his motivation, the coach said. "He just wanted to go forward as quickly as possible."

Because of his family and work, White had to design his rowing schedule around Brown's life, allowing him to do workouts every morning and a spate of exercises for 45 minutes at lunch break.

After less than a year, Brown wanted to compete at the Canadian championship in London, Ont. White thought it might be a bit too soon. Brown was undaunted.

"I had just figured out the single [scull] to the point where I could keep it going," he said. "I wasn't falling in that much. Maybe just once a training session."

But the event was in November. It was very cold. The water was freezing. It was snowing and very windy. True to form, Brown ended up falling into Fanshawe Lake during the warmup before his race.

Concerned, the umpire asked Brown if he wanted to get out of the water and into the warmth of the boathouse. Brown told them he wanted to race. He placed 13th, his teeth chattering, and was exhausted and hypothermic.

"But by the next year, I came second in the single," he said.

Before long, Brown found himself working with Spracklen, whose training regime is legendary for its punishing workloads. It takes six months, fellow rowers say, for the body to become accustomed to Spracklen's intense demands. Brown said it was a depressing, anxiety-ridden experience.

The first four months, Brown admitted he wanted to quit probably once or twice every day. He didn't though. He now says the only thing that kept him going was that he'd be too embarrassed to give up.

Something inside kept telling him to keep going. Now he's glad. He started making monumental improvements when he had Kevin Light as a partner. Light was a gold medalist in the men's eight, and sat in the bow seat in Beijing. That training helped Brown earn the seat in the men's eight.

Last year, at the world championship in Bled, Slovenia, Brown won a bronze medal with the men's eight, two years after he started working with White.

"He is naturally motivated," White said. "I pushed him as much as he pushed me and at times, he pushed me to push him."

Brown does not feel that he is in over his head any more. He feels he belongs in the men's eight. His feet are firmly planted in the boat now. "I don't think anybody can prepare for the Olympics the first time," he said. "But I feel technically prepared." 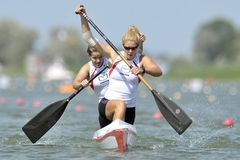