After struggling in the early going, Kaitlyn Lawes found her game Monday to propel Canada into the Olympic mixed doubles curling final with an 8-4 win over Norway.

Lawes left points on the table early on but, with the support of curling partner John Morris of Canmore, Alta., made the big shots that counted late. Up 5-4, the diminutive Winnipegger delivered with her last rock in the seventh with a hard-sweeping hit-and-stick for three — and some much-needed breathing room.

It was a nail-biter early with Lawes missing chances to leave Kristin Skaslien and Magnus Nedregotten behind. After four ends, Canada led 3-2 but Lawes was curling at 41 per cent. Morris was at 81 per cent.

"I wasn't sweating it that we were missing a few chances on the first four (ends)," said Morris. "I've got nothing but faith in Kaitlyn. She's been such an outstanding shooter in the trials and here. I just knew we had to keep giving her chances and she's going to make those. And she did. She made some clutch shots late in the game to seal that for us, which was really awesome."

Switzerland (6-2) beat a Russian team (4-4) 7-5 in the later semifinal. Canada will play the Swiss for gold Tuesday while Norway takes on the Russians for bronze. The Canadians beat Switzerland 7-2 in round-robin play.

It was Canada's seventh win in eight outings at the tournament.

Norway (4-3 in round-robin play) handed Canada (6-1) a 9-6 loss in their Olympic opener. But Morris and Lawes have since rebounded to outscore their next seven opponents 54-21.

New to the Olympic program, mixed doubles is a shorter, punchier game with curlers sweeping their own rocks after throwing them. Two rocks are put into play at the start of each end, helping complicate the landscape.

It makes for a 90-minute game that zips along, with plenty of high-risk high-reward shots.

The Canadians have blue-chip curling credentials. The 39-year-old Morris won Olympic gold in 2010 playing third for Kevin Martin. The 29-year-old Lawes won gold in 2014 as vice for Jennifer Jones. But they had little experience playing mixed doubles together prior to winning January's trials.

Both are converts to the new game.

"This mixed doubles is so much fun to play," said Morris. "If I was just starting out curling and I had the choice to play team curling or mixed doubles, I'd play mixed doubles. I think it's more fun, it's quicker, it's more athletic and you don't have to take three hours to play which is really nice.

"I think it's fantastic. You can tell why all these other countries are picking up on it and I think it's just a matter of time before it really blows up in Canada. I think it's here to stay."

Asked what her message to the IOC about the future of mixed curling at the Games would be, Lawes laughed and said: "Please keep it."

"I think the fans are loving it because it's high-scoring, it's fast-paced. And I think it's fun for them to see how men and women interact on the ice as well."

Count Mr. T among the converts.

"I am really Pumped watching the Winter Olympics," the "Rocky III" and "The A-Team" actor tweeted to his 203,000 followers. "I am watching events I never thought I would watch before, like curling. You heard me, curling Fool!

"Curling is kind of different, but it's Exciting. It's not as easy as it looks. It takes some skills that's for sure. I like it!"

Fellow actor Jeffrey Wright ("The Hunger Games," "Westworld") is also on board.

"Olympic curling appears like an old spirit friend. I watch. I listen. Spellbound. An hour passes. And I have no idea what just happened," he tweeted to his 198,000 followers.

Canadian musician and author Robbie Robertson tweeted: "Why do I love curling so much? #winterolympics."

"Curling has to be the most obscure olympic sport. What is the point?" tweeted the Senate majority whip.

Morris was curling at 82 per cent and Lawes at 76 per cent going into the semifinal, better than Nedregotten (79) and Skaslien (71). Mixed double numbers are lower than traditional curling given the lack of sweepers and more difficult shots.

Lawes credited Morris for keeping her head in the right place despite the early wobbles.

"I was obviously a little bit frustrated with not being able to finish it off with my last rock. I tried not to get too frustrated and let it bug me. And John was a huge support. He just kept saying 'Be patient. Let's figure it out. We've got eight ends. We can use all eight, so let's just take our time here.'

"I kept asking myself why. Why was I missing? I felt good with my line. It was just my speed that I felt like I needed to make some adjustments."

Lawes rallied to finish the game curling at 74 per cent. Morris finished at 82 per cent.

"It was a high-pressure game but that's what I live for," Morris said. "I love playing in those games and the juices were flowing today."

Canada helped develop mixed doubles by including it in the annual Continental Cup of Curling since 2002. But Canadian curlers have focused on the more traditional four-person game, winning just two medals — a bronze in 2009 and silver in 2017— in 10 years of world mixed doubles championships. The Swiss have won six of those championships. 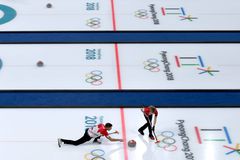 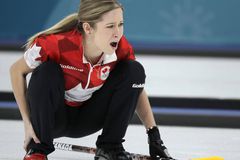 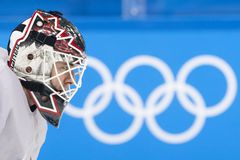