Damian Warner came off the track to a set of beaming faces in Canada jackets, taking hugs from all around as they congratulated him on an incredible Olympic debut.

He hadn't won a medal – finishing fifth in the gruelling two-day men's decathlon – but that mattered little.

In setting six personal bests in the 10 events, Warner had accomplished the unthinkable: After taking up the event only two years ago, the 22-year-old from London, Ont., put up the second best point total (8,442) in Canadian history against the world's best at Olympic Stadium.

In that context, the smiles and hugs from his coaches were understandable, as he had entered the Games ranked 24th in the world and with very little international experience.

Expectations were modest. And he blew them – and his previous high score of 8,107 – out of the stadium.

"A star was born, so to speak," said Les Gramantik, one of Canada's senior national coaches, who was ecstatic with the score.

Warner was up against a few already established stars in the event, headlined by Americans Ashton Eaton and Trey Hardee, who took gold and silver by a wide margin.

The young Canadian, however, hung in there fighting for bronze right up until the final two events, where an Olympic record for a throw in the javelin portion of the decathlon from Cuba's Leonel Suarez gave him an extra 200 points over almost everyone else.

"The dagger in the heart," Gramantik called it afterwards.

That left Warner with an insurmountable lead to chase down heading into the 1,500 metres, a gruelling finale he managed to run in another personal best to finish just 81 points off the podium.

Had he managed to win, Warner would have been only the second Canadian to take home a medal in the decathlon. The first, Dave Steen, did so in 1988 with a score 114 points less than what Warner put up Thursday.

"It was a big goal just to make it to the Olympics," Warner said afterward. "To come here and put together my best score ever, I couldn't ask for anything more."

How Warner even ended up a decathlete is a bit of a head scratcher. He grew up in a rough part of town, never watched the Olympics and was mainly just playing basketball – every position, mind you – when coaches at his high school decided to start a track team.

First he participated in the jumps (long, high and triple). Then he began to sprint. When it turned out he could do it all at a high level, their next suggestion was, "Why not try the decathlon?"

That conversation was sometime in 2008, not long after Warner had watched others limp through the event in the Canadian nationals, but it took until 2010 before he committed to the idea.

Last August, he competed in his first international decathlon at the world championships and finished 18th. Earlier this summer, he narrowly qualified for the Games with that previous personal best score.

Here in London, the bar was raised remarkably higher – beyond even his 2.05-metre high jump.

Which was another personal best, by the way.

"For me, I pick things up pretty quickly," Warner said, in one of the bigger understatements of the day. "It just makes me want to work harder and try to master each one of the events.

"I knew that I was capable of putting up these scores."

He may have been the only one.

This was a truly remarkable performance, perhaps the best by a Canadian who didn't reach the podium at these Games, and it deserves more attention than it'll ultimately get.

Decathlon, after all, is a oddball discipline in that its incredible athletes so rarely get a chance to shine, but you'll likely be hearing a lot more from Damian Warner.

Even if it's four years from now in Rio de Janeiro.

"Really I think I can improve on everything," Warner said.

"Possibly two more Olympics if he wants to," Gramantik said.

Who would bet against it? 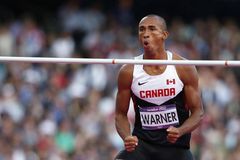 Can Canada’s track team pull out a surprise medal?
August 6, 2012 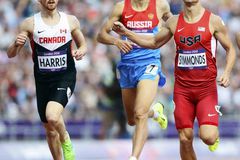