In the moments after she crossed the finish line of the Olympic heptathlon's 800 metres, Brianne Theisen-Eaton was completely spent, any bit of mental energy used up over the final gruelling steps of one of track and field's toughest events.

She was thankful to be done. She never wanted to do another heptathlon again.

And in the weeks that followed her bronze-medal performance in Rio, those feelings never waned. Not while she was trekking with her American superstar husband Ashton Eaton to Machu Piccu, or while she was working with World Vision in Kenya, or criss-crossing the United States camping with friends.

And so Theisen-Eaton is retiring, leaving the sport both satisfied with her career as Canada's finest female multi-events athlete in history, and knowing she had absolutely nothing left to give.

Theisen-Eaton, whose medal was Canada's first in an Olympic hepathlon, and her husband, who captured gold in the decathlon in Rio, are retiring together, announcing their decision with side-by-side essays on their website Wednesday.

"I went out for a run at the end of November," Theisen-Eaton said in a phone interview from the couple's home in Eugene, Ore. "I didn't purposely try to think about it, but all of a sudden it was just this gut feeling that hit me like a truck, that I just didn't want to do it anymore. (The feelings) after Rio, I thought that they would go away, and they just didn't. They were still there. I just couldn't imagine going back to training.

"And there's nothing else I felt like I wanted to accomplish. Would winning an outdoor world championship gold medal (next summer in London) be great? Yeah. But I didn't have the passion to do that. I know some people out there are probably thinking 'Oh, there's more out there.' But there really isn't, because mentally I can't give it. Mentally I've moved on."

Track and field's super couple, who met as teenagers at the University of Oregon and married in July 2013, leave the sport at the top of their game. Theisen-Eaton captured two world silver medals, plus gold in the pentathlon at the 2016 world indoor championships. Eaton is the world record-holder in the decathlon and retires with two Olympic titles, two world titles and three world indoor titles.

The couple didn't talk retirement during their weeks of globe-trotting after Rio. But curiously, the same day the 28-year-old from Humboldt, Sask., went for what would be her gut-checking run, Eaton announced his decision over dinner.

Still, she spent a couple of more weeks working through her decision. She spoke at length with her sports psychologist Penny Werthner.

"The big thing (Werthner) told me that really solidified my decision, was: 'The reason that you're questioning your feelings, and the reason it's hard to retire is because this is your whole identity and it's all you know. Any athlete who retires, it's difficult because you have to redefine yourself, and find a new community and what you like.'

"But she said 'By delaying retirement, it doesn't prevent that from happening.' You could do another year because it's comfortable, but first of all you're not going to be happy because your'e not going to be having fun, and you're just going to have to go through this at the end of 2017."

Plus, Theisen-Eaton would be training alone after almost an entire career of training with Eaton, who drew the ire of some American fans in Rio when he wore a Canada hat to the stadium to cheer on his wife.

"I was just thinking in my head 'If I just go to practice by myself every day. . . that will make it even more miserable. I can't do that. There's no way I'll last the whole year," she said. "Maybe it would be a different story if I had this huge fire to win a world championship gold medal, but I just don't. And that did help knowing that I would have somebody to go through this (retirement) with."

The two shared American coach Harry Marra, who was named IAAF coach of the year by the sport's world governing body.

Multi-event athletes are a tight-knit group, and some of the world's best including Jessica Ennis-Hill of Britain and American Trey Hardee took to social media to bid the couple good luck.

Canadian decathlete Damian Warner, who won bronze in Rio, said in a lengthy Instagram post: "This is a tough day for me as a competitor, friend, and a fan of Brianne and Ashton. . . .You both have been huge inspirations to me for a long time now. I wouldn't be the athlete I am today without your influence."

"To Brianne. . . Multiple times in Rio I counted myself out and thought there was no chance to get on the podium, but it was you who showed me with your comeback in Rio it was possible to come back. Thank you.

"To Ashton: You made me a better athlete both directly and indirectly, and for that I want to thank you!"

After the daily grind of training for the heptathlon's seven events — three fewer than the decathlon — Theisen-Eaton doesn't yet have a clear picture of how they'll fill their days.

"Maybe ask me in February or March," she said, laughing. "I feel like we're going through the honeymoon stage of retirement right now where we're like 'Oh let's go snowboarding! We can do whatever we want!' Once February comes around, and all of our obligations have settled down and we're just at home and we're forced to sit and think about what we're going to do with ourselves, maybe it will be a different story."

Theisen-Eaton is passionate about food education, and has regularly and enthusiastically shared her knowledge about nutrition through social media. She sees herself working in that field.

"I'm passionate about obesity and it's something that I would like to help change," she said. "Through sport I figured out a lot and I learned a lot and read a lot of books about the misinformation we get from the food industry, and how to read labels on packages and what's good and what's bad for you, and how to make easy, simple, quick meals and I would just love to find a way to share my knowledge of that. And hopefully I can inspire people to change their lifestyles."

As for her husband, "he's doing what I like to call 'fun employment,"' Theisen-Eaton said. "He's reading books, and meeting with people and making connections and figuring out what he likes and what's out there."

They plan to have a family "once they have their feet on the ground" and are considering a move to Canada, possibly in Kelowna, B.C. 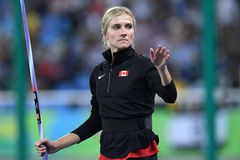 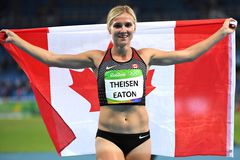 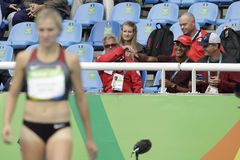