Jamie Gregg went blade-to-blade with the reigning world and Olympic champion at the opening World Cup speedskating event of the season. And while the Edmonton skater earned bronze in the men's 500 metres, he was agonizingly close to standing higher on the podium.

Gregg was paired with Tae-Bum Mo of South Korea, this year's world champion in the distance. The two men played cat-and-mouse to start the race. Mo's opening strides were quicker, but Gregg caught him at 100 metres.

Their finish seemed a dead heat, but Mo actually edged Gregg by three thousandths of a second.

Gregg will race another 500 on Sunday at the Oval and aims for a medal upgrade.

"Every World Cup, including this one, in Calgary I've won a medal so I'm happy with that," Gregg said. "They've all been bronze so I want to make it a little better than that. I'm always getting beat out by the thousandths in Calgary."

Gregg's bronze was Canada's lone medal on the first day of racing. He lost speed to the South Korean on the turn coming into the home stretch at the Olympic Oval.

"You go into the year not really knowing who is going to go fast," Gregg said. "You see some times, but now everyone is at the World Cup and everyone has peaked, so you get to see where you are in the world a little bit.

"To know that I'm up there with even a less-than-ideal race, it gives me lots of confidence going forward."

Denny Morrison of Fort St. John, B.C., was the world champion in the 1,500 two years ago, but broke his leg cross-country skiing midway through last season. Morrison says his leg his fully healed, but he's race rusty and finished 11th in a time of 1:44.42.

"If you would have talked to me after a race like this in 2009, I would probably hardly have talked to you guys and probably would be freaking out throwing things around the change room," Morrison told reporters.

"That doesn't help anything. All I can do is be motivated by what happened and use that to help me focus on what I need to do next. I don't think it's discouraging. I know I have a few things to work on. I'm pretty sure I can identify what they are already."

The Essent ISU World Cup continues Saturday with another women's 500 metres, the men's 1,000 metres and the women's 1,500 metres.

The speedskaters can gain Olympic berths for their countries at the 2014 Winter Games in Sochi, Russia, during the first four World Cups of the 2013-14 season.

Canada could take a maximum of 20 skaters to Sochi in February, but has to earn those spots through World Cup results.

Gregg is the son of former Edmonton Oilers defenceman Randy Gregg and two-time Olympic speed skater Kathy (Vogt) Gregg. His sister Jessica is a short-track speedskater who won Olympic silver in the relay in 2010.

He's Canada's heir-apparent to Jeremy Wotherspoon in the 500 metres, although Wotherspoon is attempting a comeback and intends to race at Olympic trials this winter.

"I'll step into that role," Gregg said. "We have a lot of young guys coming up and Jeremy is also coming back to try and take it back from me so I've got to fight him off as well. I love the competition. We have some really fast guys."

Wotherspoon and Gregg are in-laws, as Gregg is married to Jeremy's sister Danielle Wotherspoon.

Speed Skating Canada will hold Olympic trials in late December and early January in Calgary, but some countries will choose their Olympic speedskaters based on their results at World Cups.

Pechstein says she's qualified for her sixth Winter Games because of her victory in the 3,000. The 41-year-old wants a 10th Olympic medal in Sochi. She's won five gold, two silver and a pair of bronze in an Olympic career that started in 1992 in Albertville, France.

Pechstein did not race in Vancouver. The International Skating Union banned her for two years in 2009 based on irregularities in her blood, although she hadn't tested positive for illegal substances.

The most successful German Olympian fought her sanction in both the Court of Arbitration for Sport and in Swiss federal court, but was not allowed to race in Vancouver.

Pechstein was the 5,000 metre champion in 2002 and would have competed against Canada's Clara Hughes, the 2006 Olympic champion. Hughes won bronze in Vancouver.

Pechstein resumed winning world championship medals in 2011 after serving her suspension. She is currently suing the ISU for loss of income.

"When I get a victory, it's good for me and I think the ISU doesn't like it," Pechstein said. "It's also good motivation for me.

"For me, I can go so relaxed. I never used doping, never used any illegal things. This I know. This is a nice comeback with this today and last season and two years ago too. For me, I can stand up every morning and look in the mirror and I'm clear. This is the important thing." 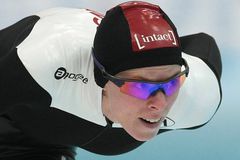