There was pain, to be sure. Excruciating physical and mental pain after 120 minutes of soccer and an uncommon loss to a team that has had their number in recent, um, decades.

But that wasn't why the Canadian women's team wouldn't leave the pitch at Old Trafford after their 4-3 loss to the U.S. in extra time of their Olympic semi-final.

In what will go down as one of the more memorable performances in Canadian soccer history, Canadian captain Christine Sinclair scored three goals but was left once again attempting to give a state of the team address after a gutting loss. Alex Morgan's header with 30 seconds gave the U.S. the win and advanced them to the gold medal game on Thursday at Wembley Stadium. Canada will play France for the bronze in City of Coventry Stadium.

The work of referee Christiana Pedersen of Norway is the talking point from this one. To say she was inconsistent would offend the word.

She missed a flagrant hand ball in the U.S. box – hey, it happens – but took a direct hand in the match when she awarded the U.S. a free kick in front of the Canadian goal after calling goalkeeper Erin McLeod for time-wasting, claiming she took more than six seconds to put the ball in play.

The kick struck Canadian defender Marie-Eve Nault on the chest and arm, from about five yards out. Any referee would have given the defender the benefit of the doubt from that close, but not Pedersen. Abby Wambach took advantage of the opportunity, burying the penalty to tie the score 3-3.

It must be said that McLeod was in fact warned by one of the linesmen early in the second half about hanging on to the ball too long. In Canada's quarter-final win over Great Britain, several of the British players complained about it, too. But it was a strange time to enforce a rule that is normally used when a team nursing a one-goal lead screws around with the ball late in a match.

Canada led on three occasions, only to see the U.S. tie the match. Megan Rapinoe had two of the U.S. goals, one on a corner kick that found its way into the Canadian net on the short side after Sinclair vacated her position at the post, anticipating a short corner. Rapinoe's second goal was a cracker; a rocket after she played the ball off her chest that McLeod had no chance of stopping.

Sinclair, lauded by U.S. coach Pia Sundhage as "a wonderful player," has seen enough of these losses to the U.S. The Americans have won 44 of 52 games between the teams (Canada has won three) and have now won 23 of the last 27. But this was not one of those nights where Sinclair was a one-person show. Midfielders Sophie Schmidt and Desiree Scott and Kaylyn Kyle were resolute in their tackling, in a game which saw the Canadians whistled for 19 fouls and the U.S. for 20.

Pedersen felt the wrath of the Old Trafford crowd for her call on Nault, because by then the neutrals in the crowd had swung solidly behind the Canadians.

It was up to Sinclair, as the captain, to approach Pedersen for an explanation after the call was made on McLeod. "I told her you never see the six-second call without a warning, first of all, and then to get a penalty shot called as a result. It's shocking. That's all I said to her."

Canadian coach John Herdman held his tongue initially after the game. "Two bizarre decisions," he said. "I've never seen a decision like that given. An indirect free kick without a real warning or a yellow card, just a bit random. And then the handball when something just gets blasted at you." But Herdman did go on to say that Pedersen "will have to sleep in her bed tonight after watching the replays," and that "she has a lot to live with."

Sinclair said she asked Pedersen for an explanation. "She actually giggled and said nothing," Sinclair said. "Classy." Tancredi was even more blunt. "She could have done a better job. A way better job. This is the semi-finals. We're supposed to be professionals and they should act like one too. I feel robbed. That's all I can say. I said to her: 'I hope you can sleep tonight and put on your American jersey because that's who you played for today."

Sinclair vowed the team would be ready for their bronze-medal match.

"Honestly," she said, looking away angrily, "I'd hate to be the team that has to play us next."

Herdman faces a daunting task ahead of the game with France – none of the Canadian players had dry eyes as they walked out of their dressing room, and some like Wilkinson and Tancredi spoke through pursed lips, barely able to contain their anger. It is true, as Herdman said, that this team has "put some demons away," referring to the collapse of the team in the 2011 World Cup that cost Caroline Morace her job. He also suggested that if the U.S. were honest "they know they got lucky tonight in many ways." Sundhage probably wouldn't agree. Asked if she felt a slight bit of remorse for the Canadians, she stared straight ahead and responded: "No."

And when it was all over the field was dotted with Canadian players lying on their backs or sitting on their haunches, heads hanging down. Sinclair sat by herself in the Americans half of the pitch for a brief minute, then walked over to console her teammates. God, the number of times this woman has had to do that. Later on, Wambach of the U.S. said that the game was "all about the unexpected." She might have also said it was about the inexplicable.

Opinion
In soccer heartbreak, a reminder of the power of sport
August 7, 2012 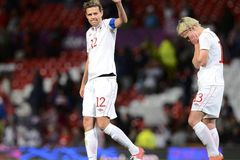 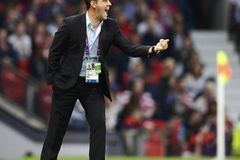 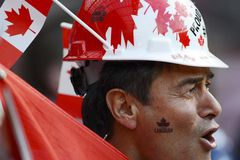 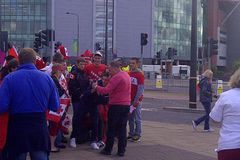 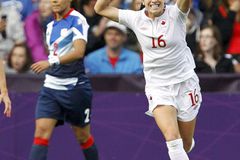