Todd Nicholson built his first hockey sled in his garage. Growing up on a farm he was adept at welding, and fashioned the sled out of steel with metal runners on the bottom, and a seatbelt to hold him on. He figured it weighed about 45 pounds.

That was almost three decades ago.

"Fast forward to today, our sleds are about seven-and-a-half, eight pounds, made out of either titanium or high-grade aluminum, the buckets are custom-made, so they're basically custom fit, so that as you move, it moves with you," Nicholson said.

The five-time Paralympian in para ice hockey – formerly known as sledge hockey – is the chef de mission for Canada's team at the Winter Paralympics, which open Friday at Pyeongchang Stadium.

Technological advances in equipment is just a drop in the bucket of Paralympic improvement. From sports science to coaching expertise to sheer participation numbers and the level of competition, the entire Paralympic movement has grown so much globally that Canada, while still a front-runner, faces some stiff competition at the top.

"It's a good problem to have," said Nicholson. "If we look at our athletes who are here – both the Canadian athletes and the majority of athletes from around the world – and the level of professionalism, our athletes are competing at peak performance. It's very difficult now for somebody who's recently injured to basically jump into a spot, which 10 or 15 years ago you had the opportunity to do that within a very short period.

"Today our athletes, the physical demand, the mental strain, and the commitment that's required, they are high-performance athletes who are competing at the top level.... And with (new) technology also comes faster speeds, faster times, and a lot more in terms of the physical demand upon our athletes' bodies."

Canada's goal for these Games is to improve on the 16 medals, including seven gold, won at the Sochi Paralympics four years ago. Canada was fourth in Russia in total medals. Four years earlier in Vancouver, Canada captured a best-ever 19 medals, including 10 gold, to finish third.

Canada's team of 55 athletes and guides arrived in Pyeongchang less than two weeks after their Olympic counterparts roared to the most successful winter Games in Canadian history, winning 29 medals for third overall.

"We look upon all of the successes they had both on and off the field of play, and we're looking to obviously improve on that," Nicholson said. "We do have a lot of pressure because they had a record number of medals for them, so that pressure is put on us as well to increase our medal count from previous Games and to make these the best Games that we've ever had and witnessed."

Nicholson broke his back in a car accident on Dec. 18, 1987 – the night of his high school prom. Growing up on a farm in Kilburn, Ont., proms were held in the winter, because people were busy working the fields during spring and summer.

He hadn't been drinking. He'd just dropped off his girlfriend and it had started to snow.

"I hit a snowdrift, lost control of the car about three kilometres from home, and I was thrown from the vehicle," Nicholson said. "I remember very little of the accident. I remember about 45 minutes before. My accident happened Dec. 18, and the next thing I remember in my mind is Jan. 28, which is my birthday. That was when I got to sit up again.

"I don't remember Christmas that year. It's interesting how your body just blocks that stuff out."

Nicholson learned about Paralympic sports while still at the Ottawa Rehabilitation Centre. Three-time Paralympic medallist in hockey Herve Lord "took me under his wing, got me involved in sport, and that's what's taken me around the world," Nicholson said.

He competed in six sports internationally – wheelchair basketball, tennis, triathlon, duathlon, marathon, and hockey, in which he found the most success.

Now he and wife Emily Glossop – a former para-skiing guide and a recreation therapist who works with kids from ages four to 18 – are all about inspiring others.

Ben Delaney, a member of Canada's hockey team in Pyeongchang, is among numerous athletes who credit Nicholson and Glossop for introducing him to Paralympic sport. The 20-year-old Delaney suffers from osteosarcoma, a type of bone cancer, that required leg amputation.

Nicholson said much of this Paralympic team has come up through grassroots programs, where Canada is doing a significantly better job at reaching kids with disabilities than 15 or 20 years ago.

"It's amazing to see our grassroots programs and our kids who love to play hockey, for example, but never thought they would get the opportunity to do it," he said. "To see a kid who's never played hockey before because of a disability, to get on the ice, grinning from ear to ear, and getting off the ice and telling his parents 'I can play hockey."' Like Canada's Olympic team, the Paralympic team is funded through Sport Canada, Own The Podium, and various corporate sponsors.

Nicholson marvels at the improvement in sport science since he first glided onto the ice on his homemade sled. Sit skis for alpine skiing used to look like a toboggan, but are now high-tech machines with built in shock absorber systems similar to motorcycles. Skiers test their suits for aerodynamics in wind tunnels. Ski wax technicians have help from Canadian meteorologists who give weather updates in 15-minute intervals.

"It's a really unique science," Nicholson said. "It's not just athletes just going out and getting on the slopes, or stepping on the cross-country and biathlon tracks." 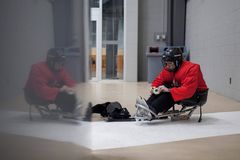 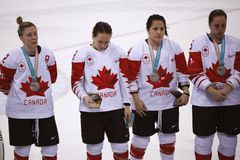