Once again, Tonya Verbeek's long-time rival stood in her path to gold. But wearing an Olympic silver medal proudly and celebrating a career that spanned three Games, the pioneering Canadian wrestler was okay with that.

Verbeek, a few days shy of her 35th birthday, added another silver to her hefty collection. In 2004, she became Canada's first Olympic medalist in women's wrestling when she placed second in the 55-kilogram weight category in Athens. Four years later in Beijing, she took bronze.

Time and time again, highly-decorated Japanese wrestler Saori Yoshida kept Verbeek from the biggest prize of the day. She has stopped the Canadian short of winning world championship titles and Olympic gold medals. Yoshida did it once again Thursday, beating Verbeek in the gold-medal match at the London Games.

Verbeek said this was most likely her last Olympics, but she won't hang up her wrestling boots immediately. Rather than ooze disappointment as she did after losing the gold-medal match in Athens, an upbeat Verbeek was in the mood to reflect on her journey through three Olympics in a sport she called an "addiction."

"I've been through a lot of ups and downs in my career, but ultimately, you have to be happy with what you've done, and I promised myself leading into these Olympics that I'm going to give my everything and the result will take care of itself," said Verbeek, a patriotic stripe of red dye streaked through her hair. "I love wrestling, I've learned you have to really enjoy yourself out there, and I really did that."

Verbeek took time off in 2010 to recover from a back injury. She's trained as an elementary school teacher and she helps coach wrestlers at Brock University in St. Catharines, Ont. She has thought about the "bunch of kids" she could have had by now. But wrestling kept drawing her back.

She proved she was still a major contender when she earned a silver at the 2011 world championship as well as the Pan American Games.

If there was ever going to be an Olympic gold-medal day for Verbeek, this appeared her best shot. Yoshida had lost a rare fight in a recent World Cup meet and the Canadian had studied her thoroughly.

Verbeek was performing well in London. She finished off Jackeline Renteria Castillo of Colombia dramatically in the semis after beating Geeta Geeta of India and Tetyana Lazareva of Ukraine. She seemed to be getting stronger as the long and gruelling day wore on. But the skilled Yoshida prevailed in two rounds, then slammed her Japanese coach to the mat in celebration before parading him around on her shoulders.

"I have fought her many times and have always had a hard time with her," Yoshida said of Verbeek through a translator. "She was a very good rival for me. She is a kind of spiritual object I have tried to overcome. I thank her very much."

Verbeek and her coaches weren't happy with some of the scoring in the match, but that's part of a sport with judges and perennial favourites who often get the breaks. But it didn't jade their appreciation of Verbeek's career – three Games, three consecutive medals. Not to mention the leadership she has shown young Canadian wrestlers such as 25-year-old Leah Callahan, who had lost out in the quarter-finals Thursday in the 72-kilogram class.

"[Tonya] might have lost her last match, but she really did prevail," coach Marty Calder said. "I'm frustrated a little bit, but I also have to step outside to celebrate what Tonya Verbeek has done for Canadian wrestling and what she's done at the Olympic Games." 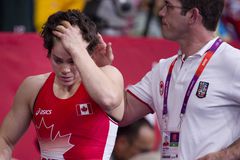