Zach Bell raced to a silver in the men's omnium Friday to win Canada's third medal at the world track cycling championships.

The six-discipline omnium will make its debut as an Olympic medal event at the London Games.

The omnium consists of six events — three timed and three mass-start — that take place over two days. Riders are ranked according to their finishing position in each event, with the lowest score winning.

The three medals are a new record for Canada, which had never won more than two at a world track cycling championship.

"I was hoping to be able to pull out something special," Bell said. "But I'm thinking four months down the road, and to get back on the podium after a few years of struggling at worlds was really positive. I was taking it step by step. I've been struggling with individual events, so I was just trying to put it back together.

"I'm going to talk with the coaches, and we are going to do everything to change this into the right colour (at the Olympics)."

Meanwhile, Britain's Victoria Pendleton won the women's sprint title in dramatic fashion after crashing in the semifinals and twice profiting from officials' rulings.

After a comfortable win over Simona Krupeckaite of Lithuania in the first finals heat, Olympic champion Pendleton was edged out in the second following an elbow touch in the closing meters.

Race officials later reversed the result and awarded Pendleton her sixth world title after ruling that Krupeckaite was riding dangerously.

The announcement of the decision prompted loud boos from the crowd at Melbourne's Hisense Arena.

"This is probably the most significant and probably one of my most emotional world titles, being that this is the last time I'm going to do this, so it means a lot to me," Pendleton said. "It probably means as much as the first one."

Pendleton appeared to connect her elbow with Meares while defending her lead, causing her bike to slide out from under her. The British rider suffered track burns to her shoulder, hip and knee, but was otherwise remarkably calm in the pits afterward.

Pendleton looked to be eliminated from the event when Meares easily won the second heat, but was later awarded the win by officials who said Meares impeded Pendleton's line.

She won the deciding third heat to set up a gold-medal race against Krupeckaite, who beat Lyubov Shulika of Ukraine in the other semifinal. Meares and Pendleton hugged on the infield after the race.

"I'm delighted I won, but obviously it's nice to win by crossing the line first," Pendleton said. "Relegations always make it feel a bit weird and iffy, so it's a shame in some respects. ... But they're the rules."

Meares, who set a world record in the flying 200 during qualification for the event, went on to win the bronze medal after cruising past Shulika in both third-place heats.

"It was very disappointing to feel as though I had progressed to the final and then to lose so agonizingly close in the third round," Meares said. "It was difficult for me to pick myself up and race again for the bronze medal, but I did and I'm proud of that."

The win gives Pendleton a valuable psychological advantage going into the London Olympics where she and Meares will again be favourites for the event.

Earlier, Katarzyna Pawlowska of Poland produced a powerful burst of speed in the final meters to claim the women's scratch race title.

Jarmila Machacova of the Czech Republic made a break with four laps remaining, but could not maintain her lead and was overhauled by the pack in the final sprint.

After scraping into the sprint quarter-finals, four-time Olympic champion Chris Hoy of Britain reached the men's sprint semifinals by a photo finish in the third and deciding heat against Germany's Robert Foerstemann.

Hoy was earlier beaten by Frenchman Gregory Bauge in the second round of qualifying and was forced to book his quarter-finals spot via the repechage round.

Hoy will race Bauge again in Friday's semifinals, while fellow Briton Jason Kenny rides against Australia's Shane Perkins after his third heat loss to Mickael Bourgain was reversed by officials who ruled the Frenchman left his lane twice during the ride.

These world championships also serve as Olympic qualifiers, and changes to the qualification process dictate that each nation can only have one representative in the sprint events at London — meaning Friday's races carry extra significance for Hoy and Kenny.

— With files from The Associated Press 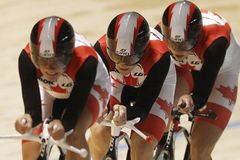