It must be a singularly horrible form of purgatory to know you're really quite good at something, but can't manage to show it when the stage lights are brightest.

Sometimes a self-imposed barrier pops up, other times you're buffeted by external factors – but if you stick with it and find a way to wiggle out, beautiful things occasionally await.

That threshold crossed, he busted out.

With the fastest array of swimmers the world has to offer bristling in the starting blocks – one of them with two golds and a silver in these Games, another known as "The Missile" – Hayden launched himself with the abandon that can only come from years of pent-up Olympic disappointment.

And 47.80 seconds later after a world-beating start ("I think he's been saving that front end all through the meet," his coach said), he had a bronze medal in his hands.

After it was all done, the guy with the Superman tattoo over his heart planted a kiss on the starting block.

"I just never knew I could love Lane 7 so much," he said.

Later, Hayden accepted his medal from Dick Pound, the former International Olympic Committee vice-president and the last Canadian to make the final of swimming's glamour event, which he did in 1960.

He wouldn't have guessed the day would end that way given how it began.

"I couldn't help but feel the best day in my life feels like the worst day of my life right now. It was so nerve-wracking, I woke up at like 6 a.m., heart just pounding because I was thinking of the race," he said. "My back was not feeling good today either, I had three spinal adjustments to get it to settle down."

So what carried Hayden to the Olympic medal he's always dreamed of wasn't physical effort, exactly.

"Physically I probably wasn't that fast, but personally and spiritually I had that extra push to push me beyond what I was capable of," he said.

If it's an immensely satisfying outcome for Hayden, who won the world championship in 2007 before faltering in Beijing, so is it for his longtime coach, Tom Johnson.

Asked if he felt whether Hayden's career would have been incomplete without an Olympic medal, Johnson didn't hesitate.

"I think so. He's got a set now of medals from every single championship, and he's been on the podium of every major championship there is. Pretty good athlete," Johnson said with a smile, later adding

In point of fact, Johnson is immensely proud of the man he has coached for 11 years ("It's like being married," he said), and said that his feat – winning a medal at 28 against swimmers five years younger – is a fitting capper to the past six seasons.

"He was remarkably calm, he knew he was ready, he was prepared to live with the good and the bad. He's had enough bad in Athens and in Beijing, once he got over the hurdle of making the final it was just 'I'm going to go swim,'" he said.

Too often, Hayden has had trouble doing that.

After competing in his first Games in Athens in 2004, he and other athletes were exiting a pub when they got caught up in a student protest.

Police beat him with batons and he suffered an elbow injury that forced him to miss the world championships that year. It also shook Hayden up emotionally.

In 2008 in Beijing, he swam quickly enough for a medal but missed the final because he was trying to conserve energy for a relay. In 2009, he entered the world championships as the fastest swimmer but finished fourth after opting to swim without the sleek bodysuits that have since been banned.

But in 2010 he won the Commonwealth Games and took over the world's top ranking, and in 2011 he won silver at the worlds.

"There's never a straight line, there's a lot of curves in the road," Johnson observed.

But after four years of training with everything he had – including hours spent practising his starts – Hayden was ready when his moment came.

"So many times when you can dream of something, a million out of a million-and-one times it won't come true," Hayden said. "But this was one of the things I'm very fortunate as a human being to have happen to me." 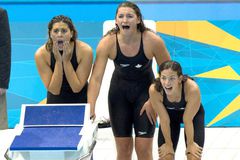 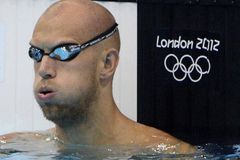 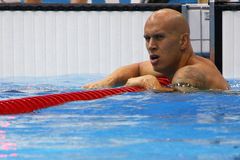