Canada's 4x100-metres men's relay sprinters have a message – and they delivered it emphatically Friday at Olympic Stadium.

First, by ripping off a season-best 38.05 seconds to qualify for Saturday's final (the third best time of the day).

Then, by issuing a statement that they want some respect from those who came before them.

Oh, and by the way, they're here to win.

"I'll put it like this: In 1995, the Canadians won the world championships," a fired-up Jared Connaughton, who ran the third leg Friday, told reporters. "In the four-by-one, they ran 38.30.

"So some of those guys have talked a lot about how we couldn't carry the torch for this generation. We just did that there."

Connaughton's message was directed at one high-profile former Canadian relay team member in particular: Bruny Surin, who was critical of the sixth-place team at the Beijing Games for being unwilling to train hard enough to beat top teams such as Jamaica and the United States.

As the only returning member from that 2008 team, Connaughton has since emerged as a fiery leader of a young group that includes Gavin Smellie, Seyi Smith and Justyn Warner, and took the opportunity to defend a squad that has been given little attention entering London.

"We're here to be contenders," Connaughton said. "Beijing, it was [let's] just make the final. This [heat] is just a step to the next level. We've got to take care of business and that's the bottom line."

In this field, business very well could mean winning bronze.

On Friday, as expected, it was the powerhouse Americans and Jamaicans who were out front, posting times of 37.38 and 37.39 seconds, respectively, even with Jamaican star Usain Bolt sitting this round out.

In third, however, were the Canadians, who finished second in their heat, narrowly ahead of Japan, France and Trinidad and Tobago.

While Canada lacks the marquee names that some of the top sprinting nations have, and didn't put a single man into the 100-metres final last weekend, Warner said their goal all along has been to take home a medal.

While they're not specifying a colour, they're also not going to admit defeat even before they square off with Bolt and Co.

"It's just the four of us right now. We're coming here with a job to do."

Canada's relay team has had a rather uninspiring history since Surin and Co. left the scene in the late 1990s.

Since winning gold at the 1996 Olympics and 1997 worlds with a foursome anchored by former world-record holder Donovan Bailey, this is a program that since finished 11th, ninth and sixth at the Games, and been shut out entirely at the worlds – often not even making the final.

There's a good reason, in other words, that swagger has been hard to come by.

Athletics Canada has attempted to change that by investing more in the team, which is now receiving Own the Podium funding and intensive warm-weather training camps in Florida.

They've also brought in Glenroy Gilbert – another member of those golden-era sprint teams – as coach, something that has obviously helped their mindset.

While there may not be a sub-10-second man such as Bolt or Bailey among them, that isn't a problem – as long as they run close to 38 seconds flat and contend for what's left.

In a relay, anything can and often does happen, as was the case Friday, when Great Britain finished ahead of the Canadians but was disqualified for an invalid baton pass.

Also of note: Canada's time on Friday would have been good enough for silver four years ago in Beijing.

So far so good. But the big one is yet to come. 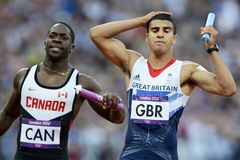 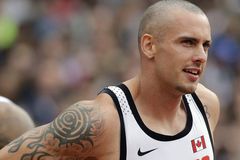 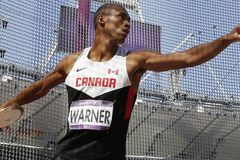 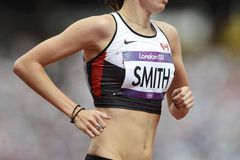