Germany, the men's rowing favourite in the eight-man medal event, suddenly has a viable competitor in the form of Canada.

The Canadians are the defending Olympic champions, but their Titanic performance last Saturday had convinced the Germans and the other top contenders that the Canadian rowers were no longer a threat.

Indeed, the Canadian boat finished an embarrassing 12 seconds behind the Germans. In rowing terms, that's a century.

A lot can change in 48 hours, however. On a brisk, sunny Monday morning here, the Canadians looked nicely competitive once again, perhaps even dangerous. In the repechage, the crew placed second, behind the British, guaranteeing them a berth Wednesday in the medal race, the marquis event in the Olympic rowing calendar.

It was an impressing turnaround. By the Canadians' own admission, they looked like amateurs in their debut heat last Saturday.

Crewmember Conlin McCabe compared the performance to "panicking in a pool, splashing." Coxswain Brian Price said they rowed "like a bunch of kids" and admitted he had trouble steering the long, pencil-thin boat.

The turnaround was remarkable. Among the six boats in the race Monday, the Canadians had the fastest second half in the two-kilometre m event. Their final surge meant they finished just half a second behind the winning boat.

It took two days of soul searching, and perhaps a low-grade collective nervous breakdown, to get the Canadians back in the game. After taking gold in Beijing in 2008, another disaster on Monday would have been a national embarrassment for Canada and a devastating blow to the crew and their coaches.

The team's high-performance director, Peter Cookson, called the surge "a really good sign." Translation: Don't count us out, a medal is in the offing.

What went wrong last Saturday? A bad case of the nerves, it appears.

Don't forget that the crew isn't the same one that turned the rowing pond in Beijing into Canada's mare nostrum. Only three of the current crop – Andrew Byrnes, Malcolm Howard and Price – were on the gold-medal boat. The others are newbies, excited and nervous about their Olympic debut, evidently to the point of distraction.

McCabe blamed "a little bit of nerves, this was the first time for most of us, there's anxiety."

On Sunday, the crew did what they called a "reset" to make sure they wouldn't repeat their disastrous performance in the repechage Monday. They relaxed and decided to slow down their rowing cadence a bit, giving them longer, more powerful strokes.

They also took encouragement from the fine showing by the Canadians in the women's eight. On Sunday, the girls easily won their heat, over Romania and the Netherlands, to advance to the final Thursday.

The Canadian men were beaming after their Monday race, happy with their turnaround, even if they could not beat the Britons, and confident that they will shine in the final. "This is a much better representation of the sort of crew we are," McCabe said.

In spite of the fine performance Monday, however, the Canadians are not assured gold, or even silver, given the strong field.

The Germans are the nautical juggernauts. They have not lost a race in three years and have won the world championship three years running. Kristof Wilke is considered the strongest German rower. He is only one of two German rowers left over from the Beijing challenge, where the team ended up eighth, and is determined to use the London Games to make up for the shabby performance. "The Germans are certainly front-runners, but not unbeatable," McCabe said.

Two days ago, the Canadians were thinking everyone could beat them. Now they're medal contenders once again.

Meanwhile the men's four of Will Dean of Kelowna, B.C., Anthony Jacob of Vancouver, Derek O'Farrell of Montreal and Michael Wilkinson of North Vancouver, B.C. placed third in their heat Monday morning to advance to the semi-finals in the event. 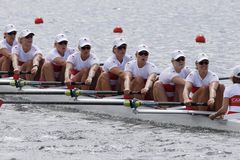