Charles Samuels contacts Canadian Olympians and tells them it's past their bed time. He bans Red Bull drinks and puts moratoriums on their iPhone use at night.

He isn't losing sleep over it.

Samuels, a Calgary doctor and head of a major sleep research project funded by the Own the Podium program, dreams of a cultural revolution when it comes to athletes' sleep habits. And six years after the project set its sights on the 2010 Vancouver Winter Olympics, Samuels and his team have had remarkable success in doing just that.

"They were living in, like, the caveman times," the medical director of the Centre for Sleep and Human Performance in Calgary says.

Every Canadian athlete headed to the 2012 London Olympics has been screened for sleep disorders. Most have had their travel schedules meticulously planned in order to minimize effects of jet lag, including detailed breakdown of flight schedules, when to sleep and where they should stay. And when they look at the accommodations in the athletes' village, they've already thought about how to get the best sleep.

Canada is the only country that has gone to this degree in the planing of its Olympic athletes' sleep, Samuels says.

It may seem obvious to link sleep to top performance. But, Samuels says, scientists are only just starting to look at the question of why sleep is – or isn't – important for athletes.

"This is new, and we really don't know the answer to that question. But we speculate, that one: Sleep is important for cognitive recovery, learning – which is critical for athletes – and imprinting memory. And then, for physical recovery and injury prevention."

As researchers look specifically at athletes, they are are extrapolating from large body of evidence showing the importance of sleep for shift workers (such as police officers, nurses and soldiers). In those cases, the evidence is clear a lack of sleep can cause cognitive impairment and affect health.

Despite being young and in shape, some athletes also suffer from sleep disorders. While they aren't at higher risk compared to the general population, such problems can be detrimental to results in competition.

"If you find one high-level bobsledder, which we have, who has sleep apnea and didn't know it, and you treat them, that's a high impact," Samuels says.

Interestingly, the type of sleep disorder suffered from can be skewed to the type of sport. Power athletes, such as football players or wrestlers or shot putters, can suffer from sleep apnea due to their large necks, he said.

Endurance athletes such as swimmers and speed skaters are prone to insomnia, particularly when they're working at peak levels. They can become so exhausted, or "hyper metabolic," that they're unable to sleep.

The entire life of an athlete must be considered, Samuels said. For example: It takes about 10 years to turn a promising young swimmer into an Olympian.

If they start at 10, they're hitting some of their most intense training during adolescence. But teenagers need an average of 10 hours of sleep per night. Many young swimmers aren't getting near that much because their swim workouts start at 6 a.m.

No wonder coaches were seeing promising young athletes burn out, says Samuels, who is doing research with the University of Calgary's sports medicine group on how sleep affects an athlete's physical recovery.

It comes down to discipline and hard choices, Samuels says, recalling an elite swimmer who was trying to make the Olympics and complete a university degree at the same time.

"She was a mess," he says. "I wasn't very pleasant with her. I basically confronted her and told her she had to make a decision as to whether she wanted to be an Olympian or not. Because she was gong to university and you can't do both. It's tough."

But at least they're better than some pros. Samuels's athlete clients include the Calgary Flames.

"Professionals are horrible [when it comes to getting enough rest]. Some [NHL] teams, when they're visiting Calgary, part of the contract is they have to provide the players with five cases of energy drinks in the locker room." 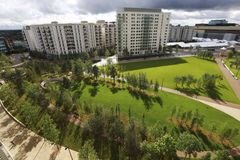