Ben Scrivens learned a lot playing professional hockey in Russia over the past two seasons, including a few of the local customs. On a player's birthday, for example, he's expected to bring cake for the rest of the team.

"That was one of the things I actively rebelled against," Scrivens said. "They said, 'In Russia that's how you do it.' I'm not Russian!"

Nor does he like to bake. But his time in the Kontinental Hockey League has also taught the goalie from Spruce Grove, Alta., a few things about some of the shooters he and his colleagues in the Canadian net will be facing in Pyeongchang.

In a tournament that is more difficult than past Olympics to pre-scout, since the NHL's absence means players have been pulled from leagues all over Europe and North America, the three Canadian goaltenders – Scrivens, Justin Peters and Kevin Poulin – are drawing on their collective experience to form a picture of what they'll be up against.

Former NHL stars such as Russia's Pavel Datsyuk and Ilya Kovalchuk are no mystery. But for many of the other players in the tournament, Scrivens's time in the KHL, Peters's experience in Germany's Deutsche Eishockey Liga and Poulin's games in Austria will be invaluable experience.

"We're definitely not afraid to say what we've seen before if the guy wants it," Scrivens said after the Canadian squad practised on Saturday.

There's always talk at the Olympics about the need for teams to come together quickly on the ice and in the locker room. The same can be said for the goalies, and Scrivens, Poulin and Peters have set out to develop a camaraderie.

Those efforts were on display during Saturday's practice, whether it was subtle glove taps during breaks or Poulin and Peters huddling to talk shop near the blueline while Scrivens manned the net during a breakout drill.

"Just like all the guys, we're trying to get to know each other and at the same time try to support each other," said Peters. The Blythe, Ont., goalie played 83 NHL games, mostly with Carolina, and has split this season between Riga Dynamo of the KHL and the Cologne Sharks of the DEL.

"We've all definitely played with some of the guys or against pretty well everyone over the years, so we know a few tendencies," Peters said.

Scrivens, who played most of his NHL games for Toronto and Edmonton and now plays for Salavat Yulaev Ufa in the KHL, said the three are taking a team approach to the position.

Their acquired knowledge could be important should any of the deciding games go to a shootout – a risk in international hockey Canada knows all too well after losing to Sweden in such fashion in 1994, the last time the Olympic tournament was played without NHL players.

During Saturday's practice, coach Willie Desjardins finished the session with a shootout, dividing the squad in half. The team that didn't score had to pound out five push-ups after each failed attempt. As KHL forward Wojtek Wolski skated in on Scrivens, the goalie shouted, "I know your move." He then stopped Wolski in close with a low pad save.

"We were talking about shootout moves yesterday, so it was fresh," Scrivens said. "But, fortunately for him, he's got a lot of moves, he actually almost had me on that one. But it's more trash talk than anything."

Peters said the goalies have gathered on and off the ice to discuss strategy – "goalie talk," he says – and that they're eager to compare notes.

"We're all a little different style and if we can maybe share a few tendencies, we'll help each other out," he said.

However, Scrivens said the focus is more on the games than on potential shootouts.

"You've got a full game to play before you start thinking about a shootout," he said. In fact, Scrivens prefers not to get a scouting report before facing a shooter in such situations.

Team Canada has only been together as a complete squad for a few days now, with players joining the team in waves from their respective leagues. But the goalies have developed a bond, Scrivens said.

"We're a three-man unit … The talk that we have amongst each other is not for show or anything, we genuinely support each other," he said.

"There's only one net and whoever gets the call, he should know that the other two guys have his back and are going to be his biggest fans in the arena that night, because the next game it could be the roles are reversed." 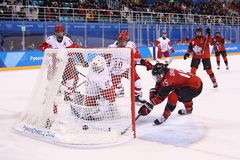 With the absence of NHL players in Pyeongchang, a shadow lifts from the underappreciated
February 10, 2018 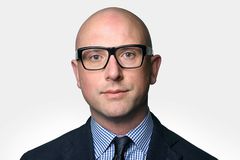 As Team Korea falls in a blowout hockey game, fans ask whether the two countries should skate together
February 10, 2018 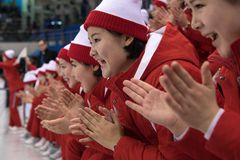