After winning a silver medal in the men's pair rowing event at the 2008 Beijing Olympics, Dave Calder and Scott Frandsen returned home to Canada, exhausted.

You'd think Calder had had enough. He'd been to three Olympics and found a medal at one. "I had to go back to work, to work our way out of debt," said Calder, who is married with two children.

Both heavyweight rowers retired and got real jobs. But it wasn't enough. "It never really went away," Calder said.

Frandsen felt there was more to do. "We surprised a lot of people a little bit [in Beijing]," he said. "We came from out of nowhere, and had a great regatta. We had a great race. We had our best race. No regrets. But I still wish we'd won."

They are back together in the men's pair for the London Games, and this time, silver won't be good enough. "We came back for the sole purpose of winning," Calder said.

They both found their way to London via the Vancouver Olympics which put a little extra wind in their sails. Calder worked for the B.C. government and ended up as a special adviser on Olympic projects, like Robson Square and the Paralympics.

Frandsen, an investment advisor at RBC Dominion Securities, seemed a natural for working on the firm's Olympic sponsorship, which included the torch relay.

Immediately after the closing ceremonies of the Vancouver Games, Calder took the midnight ferry back to Victoria and he was at Elk Lake - the men's national team training centre – the next morning.

He reasoned that he'd had only 12 months to prepare for Beijing (when Calder made another comeback) and this way, he would have 30 months to get ready for London. "The energy from the Vancouver Olympics reinforced that decision," he said.

Meanwhile, Frandsen sought his athletic outlet in running Ironman triathlons. But that rugged pursuit wasn't enough. "It wasn't quite as intense," he said. "I missed the pursuit of excellence. I love being able to train and to push myself every day and to have that goal on the horizon of something that is extraordinary."

Both knew that if they didn't do it now, it would be too late. Frandsen turned 32 on July 21. And Calder is 34. The window on their elite athletic lives is closing.

There was no guarantee that they would end up back in the same pair boat when they returned, although as Olympic medalists, it was likely. Very quickly after they returned, they knew they should remain together.

They suit each other. "These guys love the thrill of racing," said Peter Cookson, director of high performance for Rowing Canada. "They love the fear of it. They love the process of getting ready for a race.

"They are both physiologically gifted," he said. "And they love going in against the rest of the world and seeing what they can do."

Best of all, the return of the veterans has particularly helped the men's four, all young new Olympians. "Their progress up the ladder has been a direct result of Scott and Dave being there," Cookson said.

Both Frandsen and Calder have been breaking records on the rowing machine (ergometer) at this late stage in their careers, Frandsen lowering his previous best by eight seconds, Calder by two seconds.

The training programs that coach Terry Paul has set for them has "really reaching into new layers of physical capability that I don't think we felt we had in ourselves," Calder said.

Frandsen said they are much fitter and stronger than they were four years ago.

They are both different people, with Calder being a family man, Frandsen a bachelor. "In the leadup to Beijing, we had no time to think about anything," Frandsen said. "This time around, we've had a year and a half to get annoyed with each other.

"But at the end of the day, we're together and we have each other's backs." 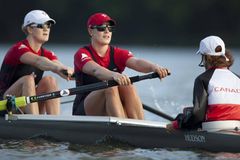 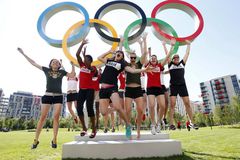