The Canadian snowboarder wasn't fazed by any of it.

Blouin showed her mettle in the women's slopestyle Monday and came away with an Olympic silver medal for her efforts.

Arriving at the Pyeongchang Games as a medal contender after winning a world title last year, Blouin took a hard fall last Friday in training. She was transported off the course on a sled and taken to hospital as a precaution.

"I didn't have any symptoms of a concussion," Blouin said. "The doctor cleared me. I just hit my head hard."

Sporting a shiner under her left eye and a gash on her cheek, Blouin was cleared for practice and had a full training session Sunday.

She overcame the high winds Monday to nail a clean second run for 76.33 points.

American Jamie Anderson scored 83.00 points for the gold and Enni Rukajarvi of Finland took bronze with 73.91.

The qualification round was scrubbed a day earlier due to strong winds and the start of competition Monday was delayed for 75 minutes.

When organizers decided to proceed, crashes and aborted runs soon followed. Only a handful of riders completed their full runs and most had to dial things back.

Afterwards, many competitors said they felt the event should have been postponed.

"It's a really big shame because it was kind of like winning the lottery," O'Brien said. "You got a run without wind, you really had a chance.

"I unfortunately did not win the lottery today."

Voigt, meanwhile, described some of the jumps as "terrifying."

"When it's gusty like this, sometimes it can just hit you in mid-air and you can feel it," she said. "Picture holding an umbrella in the wind and that's your snowboard."

O'Brien felt the weather was worse Monday than it was a day earlier when the qualifier was cancelled. She said the sport's governing body, FIS (International Ski Federation), made the decision without input from athletes.

"That was a call that was made without our opinion at all," she said. "I think 90 per cent of the women did not want to ride today."

The FIS said in a statement that it was aware of the challenging conditions and that a competition would never occur if safety couldn't be assured.

"FIS always aims for the athletes to be able to stage their best performances, which some athletes have expressed was not the case today, but the nature of outdoor sports also requires adapting to the elements," the statement said.

Blouin, from Stoneham, Que., crashed in training when she caught an edge after landing a jump. She landed face-first on the hard-packed snow.

Even though she was sore, she never had a doubt about her status for the competition.

"I was laying down and I had a headache, but I was feeling good," she said. "I was like, 'I can still ride.' I was really confident."

Massage therapy helped and she felt good to go after training.

The 26-athlete start order was in reverse order of the FIS seeding ranking. Blouin went down seventh-last and O'Brien was fourth-last.

Anderson, who also won gold at the Sochi Games, said her winning run probably wouldn't have been enough to qualify for a final on a normal day.

She added she felt proud to be able to keep up with the sport's rising stars despite the toll it can take on the body.

"It's hard to come back when you have those crashes," Anderson said. "But I think that's what makes us warriors, like this bad-ass (taps Blouin on shoulder), is when you fall you just have to get back up and keep going."

Blouin did just that, delivering a smooth but safe performance in the final run. The wind forced Blouin to hold back a half-rotation at the end and it proved to be a smart call.

"I felt a really big gust on the last jump," she said. "I managed to land it."

It was Canada's third slopestyle medal of the Winter Games. Max Parrot of Bromont, Que., won silver and Regina's Mark McMorris took the bronze in the men's event Sunday.

Opinion
Forcing the women’s slopestyle final to go ahead was careless and a new kind of unfair
February 11, 2018 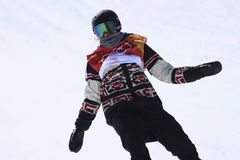 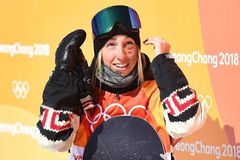 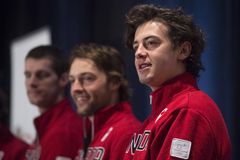