Almost everybody who saw Usain Bolt win gold in the 100 metres at the London Olympics watched it on television. Canadian sprinter Andre De Grasse was no different.

Back in 2012, before he was an Olympic sprinter, De Grasse watched the race in his living room like everybody else.

"I was at home in Markham," De Grasse said. "I remember watching Bolt and I was like whoa, man, he's fast."

This time, as people flip on their TV sets this weekend to watch the glamour event at the Rio de Janeiro Olympics, DeGrasse aims to be lining up next to Bolt, keeping pace with the world's fastest man.

If you needed any further evidence of De Grasse's unfathomable, meteoric rise up the world sprinting rankings, there is no better barometer than this: In four years he's gone from watching the race on his couch, to putting on spikes and running it.

It sounds more like a reality-show gimmick than an athlete's origin story.

But anyone who's followed De Grasse's trajectory from prospect to podium contender in 2016 knows exactly how far the sprinter has come in such a short period of time.

The 21-year-old will take to the track for the 100-metre heats on Saturday, hoping to lock down a good lane for the semi-finals and finals on Sunday. Having run some tantalizingly fast, sub-10-second times over the past two years, De Grasse likes his chances of lining up next to the world-record holder from Jamaica.

Though Bolt has been dogged by a wonky hamstring, the two-time 100-metre Olympic champion, who's also won double gold medals in the 200 metres and 4x100 relay, expects to run.

That means it's up to De Grasse to get through to the last race. Coming off a 9.99-second time in Canadian Olympic trials in July, De Grasse has been working at peaking for Rio. If he can improve upon his personal best of 9.92 seconds, and run the race of his life, the Canadian will have a shot at the podium.

"I never thought I'd be able to run as fast as [Bolt] because you know – that's crazy," he said in an interview before the Olympics. "But now that I've run under 10 seconds, I feel that I can."

Back in 2012, De Grasse had only recently started training at The Speed Academy, the Pickering, Ont., track club founded by former Olympic sprinter Tony Sharpe.

Sharpe spotted De Grasse at a high school track meet, running the 100 metres in basketball shorts, yet blowing away a field of local athletes from his age group. Sharpe took the young sprinter under his wing and began shaping him into an Olympian.

Since then, De Grasse's life has started to resemble that of a traditional sprint star: he was recruited to the University of Southern California, gave up his final year of eligibility last year to turn pro, then inked an $11-million (U.S.) shoe deal with Puma.

But the one thing he has yet to do is compete on the sport's biggest stage. And though he's in Rio to gain Olympic experience, he's also looking to leave with a medal.

"It's my first Olympics, so I think of it like I don't want to put that much expectation or pressure on myself," De Grasse said. "But I know that I am capable of doing some great things and special things if I put my mind to it."

Coming into the Olympics with a low profile has proved difficult, even though he's a rookie. After De Grasse won the 100 metres and 200 metres at last year's Pan American Games in Toronto, he could no longer fly under the radar. Now, rather than concentrating solely on trying to beat the sprinters he's watched on TV, he's noticed other athletes are gunning for him.

The hunter has become the hunted.

"It's crazy. I was the guy that was just trying to beat everyone, but now it's like I have a target on my back and everyone's trying to beat me," he said. "It's kind of a thing where I can't let that happen. I've got to go into every race and I've got to stay winning." 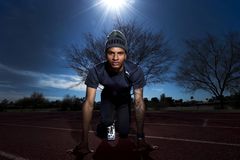 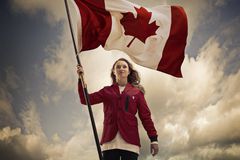 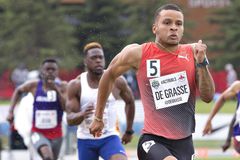