It all seems very cold and Orwellian, this business of segregating children from their parents at an early age, handing them over to faraway institutions where they are mostly left to fend for themselves in often abject conditions.

But hey, at least major junior hockey players can get their university tuition reimbursed under certain circumstances if their careers flame out.

The people in Canada tut-tutting about the heartless, calculating approach employed by the Chinese in molding and shaping champions - a tiered system of sporting academies known as Juguo Tizhi - would do well to remember the difference between China's remarkably successful medal factories and the approach in the West is one of scope, not kind.

There's a continuum for such things, and even if China is at the far end, the fact remains we've been on it for decades - it's only been 15 years since the last aboriginal residential schools were shuttered.

For those who see it as an exaggeration to compare big-time hockey in Canada or the English boarding school system, say, to what's happening in China, consider this: a just-turned-14 hockey player in a Midget-AAA program in Chicoutimi may have the ability to phone home whenever he wants, but he isn't actually at home.

And if he clings to the NHL dream, he'll do anything to pursue it, even if it's to his personal detriment.

Elite athletes everywhere make considerable personal sacrifices, all the Chinese have done is follow the maxim of 'win at all costs' to its logical, if extreme, conclusion.

The brilliant Chinese diver Wu Minxia made international headlines last week when her father Wu Yuming told a Shanghai newspaper the family waited a year to tell that her grandparents had died and that her mother had cancer for fear of distracting her from training.

The elder Wu admitted "We accepted a long time ago that she doesn't entirely belong to us."

That's a heart-breaking thing for any Western parent to hear, but here's the thing: when you put the question to Wu Minxia, it doesn't appear to bother unduly.

The 26-year-old quite rightly pointed out that "separated from family, I think it's not only Chinese athletes."

"(The diving team) are just like a big family, we train together from different locations . . . maybe there's some distance between your real family, however, I think the distance does not stop us feeling they are beside us," she said. "Now, with high technology, we can call every day."

It bears mention that Wu doesn't fit the description of a broken and chipped human being.

She has the confident carriage of someone who has won six Olympic medals - four of them gold - there is a glint in her eye when she's asked a challenging question, she's quick to laugh and displays an ironic wit.

None of this means she won't suffer long-term damage like former champion gymnast Zhang Shangwu, who lives on the streets and panhandles in a busy Beijing shopping distric.

Then again the men who were preyed upon as children by the likes of Graham James have suffered too, as have all manner of former NFL players (just Google 'Mike Webster' and 'bus station' and you'll see what I'm talking about).

The point is merely this: there isn't a lot of use in attempting to impose one's morality on another culture.

And there is a real sense at these Olympics, whether it's in consideration of swimming phenom Ye Shiwen, or Wu, or silver-medal winning trampoline athlete Huang Shanshan - who broke down in tears and apologized for not winning gold - that China is now seen as the other.

Even the rhetoric employed has a Cold War ring to it - a columnist in the Independent newspaper referred to the "chilling" use of the word "educated" as it applied to a Chinese doubles badminton team that was summarily booted out of the Games for match-fixing and taken to task by their country's Olympic officials.

Yes, the Chinese compel elite athletes to train under circumstances that North Americans would find appalling, yes, they start them younger than we do, yes, studies are often forsaken.

True, totalitarian regimes from the Soviet Union and East Germany through to North Korea have a poor track record when it comes to doping and harsh treatment of young athletes.

But there are uncomfortable facts that make it hard for Westerners, and for Canadians in particular, to stand in judgment and assume a stance of moral superiority.

China doesn't encourage 11-year-olds to skate around a rink checking each other into the boards - or 16-year-olds to fight with 21-year-olds for the entertainment of the ticket-buying public and personal enrichment of millionaire junior hockey owners - it doesn't have 10-year-olds bounce off each other in football helmets risking brain injury.

The complicating factor in all of this is the reason Peewee AA programs and Pop Warner football leagues survive is there are large numbers of willing participants.

Same thing in China - "I choose to be a diver, so I would pursue this goal to pursue my dream," Wu said.

A North American coach who has worked with athletes in the country marveled at the sheer number of candidates for his discipline.

The same coach suggested that if Canada ever wants to enjoy the sort of Olympic success that China has, a shot of autocracy in the sporting establishment would help.

There is an intersection of the political and the commercial at the Olympics, and this fortnight is an unmistakable message from China: we'll do what we have to in order to dominate you.

There can be no moral relativism: China is properly criticized for its repressive approach to dissidence and for its wanton abuse of human rights, including those of athletes; wide swaths of Chinese society have started to declaim the obsession with sports and critics of the state are legion on social media sites and elsewhere.

For all that, China remains a member in good standing of the international community and a key priority in the foreign and trade policies of every country in Europe and North America.

So denounce the horrors of China's system if you must, but try to remember who you're dealing with the next time you buy a smart-phone or a tablet for the tween or teen who lives in your home.

Acid-tongued Scottish comedian Frankie Boyle nailed it in a tweet last week that skewered the online critics of a British teenager who was questioned by police for sending out abusive Twitter messages to diver Tom Daley.

"You're telling everyone how shocked you are by a teenager's twitter feed on an iPhone that was made by a slave who wants to commit suicide," he wrote. 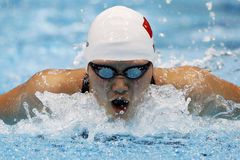 Olympic swimming was a meet of beginnings and ends
August 5, 2012