When Greg Nugent started receiving thousands of Twitter notifications last Wednesday, he figured something had gone terribly wrong with his Paralympic fundraising campaign.

The 42-year-old Englishman had started a campaign on Aug. 23 called #FillTheSeats, with the hope of sending Brazilian children and people with physical impairments to the Rio Paralympics free of charge. For every US$15 raised, a child would be sent to Maracana Stadium for the Paralympic opening ceremony on Sept. 7.

Nugent's notification frenzy turned out to be an endorsement from British rock band Coldplay.

Nugent said the closing ceremony of the 2012 Paralympics in London must have made a lasting impression on the band. Coldplay was a performer at the ceremony along with Rihanna and Jay-Z.

"The moment they saw it, I think they never forgot what they went through in London and what the Paralympics mean to them," Nugent said in a phone interview from London.

"If the last week has proven anything to me, it's that the Internet can be an incredible and positive force. And I think that's what's happening in the moment."

Coldplay's tweet, which generated 644 retweets and almost 2,000 likes from their over 17.3 million followers, helped smash Nugent's original target of $1,000.

The campaign's next target was $15,000 and as of Monday night, donations closed in on $21,000. The funds raised will be given to the IPC's charity — the Agitos Foundation.

The idea came to Nugent, who was the head of marketing for the London Games, when he saw empty seats during the Olympics earlier this month.

"I think the problem with empty seats during the Paralympics ... the potential for the legacy is just lost," he said. "You got to try and get young kids into the venues and make them see what's possible in life. In my mind, there's nothing more incredible than when I saw the Paralympics. It moved me, the children that went, they still recite the stories.

"The idea that the seats in Rio might be empty saddened me, so instead of moaning, I thought we should try and do something to help."

On Tuesday, the International Paralympic Committee and the Rio 2016 organizing committee backed Nugent's movement and created a new target of $300,000 or 10,000 tickets that would help get Brazilian children and people with a physical impairment transportation to the opening ceremony, a meal and the experience.

Canadian para-swimming veteran Benoit Huot, who will be competing in his fifth Paralympics in Rio, says that initiatives like Nugent's are exactly what the Games need.

"In 2007 (during the Parapan American Games), I remember for the qualification in the morning, they were bringing all the summer camps," Huot said on Monday. "They had a harder time to sell tickets, especially for the preliminaries, but the seats were all filled with kids and they were inspired and had a chance to see."

Huot's teammate and Rio 2016 medal hopeful Aurelie Rivard adds that the world needs to be more educated on the Paralympics, and that it's important to start at a young age.

Nugent co-founded his own marketing company called Inc. London after the 2012 Games and says that the campaign will most likely run until the night before the opening ceremony.

Experiencing a Paralympics first hand was a motivator for Nugent to get the ball rolling with #FillTheSeats.

"What the Paralympics does to you is it makes you understand the power of humanity and what we're capable of when we put our mind to something," Nugent said.

"If we can get them (children) to think differently about disability, it will change the world."

Life after the Olympics: athletes struggle with what to do next
August 29, 2016 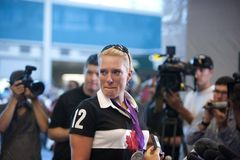