The World's Easiest Game to Rip - "The Roaring Game/The Boring Game," "The World's Coldest Drinking Game," "Curling beats sex because you can do it in eight houses in under two hours" - is no longer quite so funny.

No, curling is suddenly cool, it's certainly sexy - and it's increasingly young and fit.

At Ice Cube Curling Center, the fiercest competition has been for seats in the media section, the interest in the 2014 Olympics curling tournament many times what planners anticipated. Sportswriters can rarely find a seat. And as for photographers, there is barely room to point a lens through the thicket of raised arms and cameras.

The primary reason, but certainly not the only reason, is the Russian women's team, four very young and tall women who look as if they are sliding down a runway, not a sheet of curling ice.

The British skip, Eve Muirhead, was in fact a successful fashion model.

Russian skip Anna Sidorova, who has also modelled, is a sensation at the Games, with huge crowds chanting and calling her name and cheering every single shot as her team got off to a quick start.

Both Muirhead and Sidorova are 23 years old, Sidorova having turned 23 on the day before the XXII Winter Games opened.

But it is not just the women attracting the attention of fans who might not be familiar with the intricacies of the complicated ice game. The Russian men have their swirling red and white pants; the Norwegian team became famous in Vancouver for their outrageous pants and good looks; and Brad Jacobs' Canadian team has been nicknamed the "Buff Boys" for their dedication to fitness that they like nothing more than to show off.

"Hats off to them," Jacobs says of his Norwegian competitors. "If it brings any more attention to our sport, great. But we'll stick to the traditional black.

"Our team's known for the tight shirts."

Curling teams used to be known for other things. Like smoking. And eating. In the lead-up to the 1988 Calgary Winter Games, two of the Canadian curlers were told to lose weight after a simple fitness test determined neither of them could do a sit up.

No more, Jacobs calls his Sault Ste Mari rink - composed of Jacobs' cousins, E.J. and Ryan Harnden and Ryan Fry - "gym rats" and they are in the gym virtually every day, sometimes working out for hours.

"They're pretty strong," says Kaitlyn Lawes, the third on the Canadian women's team. "I had a workout with them the other day in the gym. They definitely spend a lot of time making sure they're in good shape."

But it is Sidorova who has become the focus at Ice Cube as well as on the Internet, where publicity pictures showing her in lingerie with a curling stone and broom have been Tweeted around the world each time she plays.

"First of all we are professional sportsmen, and then we are 'pretty girls' or however you want to put it," she said following her team's impressive victory over U.S.A. on Tuesday.

"I would like to hear people saying about me, 'This is a good curler.'"

But she knows it comes with the territory. There are her photos on the web and teammate Ekaterina Galkina, the lead, has appeared in the Russian version of Maxim magazine.

In Sidorova's opinion, whatever attracts people to the sport is good for the sport. Curling needs its fans. The game, after all, was in the 1924 Chamonix Games but vanished. Three times it was a demonstration sport before finally, in the 1998 Nagano Games, was it granted official status.

Curling in Russia is little known, Sidorova says: "There's a very small amount of people who can say something about curling. There's stones? Brooms? Ice? What is it?"

She believes that, slowly, more fans are coming to the game and understanding it better - something she has seen even over the two days in which crowds have turned out to cheer her on at Ice Cube.

"At the beginning not everyone understood what was happening on the ice," she says. "They were cheering even for normal hit-and-stay and clearing [shots]. I cannot stay that they understood everything, but a little bit, yes."

"I think the sport is awesome right now," says Canadian lead Dawn McEwen. "The TV viewership is high, sometimes higher than hockey, we hear. I think it's definitely heading in the right direction. It's exciting.'

"I think it's cool," adds Canadian skip Jennifer Jones, who was 5-0 going into weekend play.

"You've got one of the most-watched sports in the Olympics. People find it fascinating and it's just growing and growing."

And it is also getting younger, at times much younger. Skips in their 20s used to be unheard of, now it is common. This past weekend in Canada, the Rachel Homan rink of Ottawa went undefeated as it won its second consecutive Scotties Tournament of Hearts. Homan is only 24.

"It used to be people - well, I can't say that they are old, but they are probably over 30," says Sidorova, who was a promising figure skater until a leg injury put an end to those dreams.

"All the people are getting younger. More and more young people are trying curling and they like it, so probably in the next years we will see much more teams that are really younger."

Sidorva thinks it is a wonderful thing for her sport to be involved in such a revolution, the absurd and unfair image of the "fat and greasy citizen" sweeping and smoking now an image of youth, fitness, personality and even beauty.

But she wants more.

"It's pleasant to hear that people know my name and that they like us, sure," she says.

"But it's much more pleasant when they will like our game." 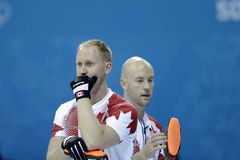