What was more remarkable about the race was the manner in which it was finished.

For the third race in his five total here, De Grasse lined up beside his new bosom chum, Usain Bolt.

Bolt cruised the whole way. In the final quarter, he turned slightly to find the Canadian. When he located him, the Jamaican slowed perceptibly. A surging De Grasse caught him up. The two crossed the finish line almost in tandem, smiling broadly at each other. They did everything but clasp hands.

"I had to push him a little bit and see what he had left in the tank," De Grasse said cheekily afterward.

As they left the track, they low-fived and grinned broadly, as if they'd just shared an inside joke. Out of nowhere, this is becoming the friendliest rivalry in the history of sprinting.

It tends to overshadow the fact that De Grasse, 21, continues to show he is firmly among the very best in the world at his job.

Everyone expected him to do well in Rio. A 100-metre podium finish matched his performance at last year's world championship. But the Canadian didn't run the 200 m at that event, making this distance a bit of a wild card. He's thus far proven himself more than equal to it.

What nobody expected was how he'd be embraced here in Brazil by the best sprinter of all time.

As professionals, Bolt and De Grasse are stablemates under the Puma banner. But they had not previously been linked as friends. De Grasse has said how, upon first seeing Bolt at the 2014 Commonwealth Games, he was too afraid to speak to him. They are eight years and many worlds of experience apart.

Nevertheless, Bolt has seemed to delight in putting both his metaphoric and literal arm around the young Canadian. Again and again, they are caught embracing after races. Thus far, the iconic photograph of these Games shows Bolt looking delightedly back at De Grasse as he pips him at the finish line in a 100 m heat.

"He's just like me," Bolt said afterward. Throughout the postrace on Sunday, De Grasse had to work hard not to be seen squirming with pleasure every time Bolt's praise was brought up.

This is in stark contrast to the way Bolt tends to treat his (very few) rivals. Permanent second-bester, American Justin Gatlin, has unadvisedly (and entirely unsuccessfully) tried to goad Bolt at times.

"I think they have not learned over the years that the more you talk, the more I will want to beat you," Bolt warned before arriving here. He said the 34-year-old Gatlin would "feel my full wrath." And, thus far, he has.

Poor Gatlin. To be nearly the very best that ever was at something, and to lose all that forever once Bolt appeared on the scene.

In that sense, De Grasse has the luck of timing. Bolt has broadly hinted this will be his last Olympics, and especially if he repeats his triple-gold performances from Beijing and London. Losing one of the 200 m or the 4x100 m relay might change his mind.

Though he's said it here several times, it's not clear if De Grasse actually believes he can beat Bolt. Based on how things are playing out and with the future in mind, he may eventually be just as well off if he doesn't. That way, he'd get the title and a permanent pal. 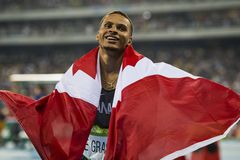 Small, light and unconventional: How does De Grasse do it?
August 17, 2016 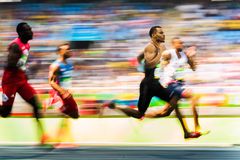 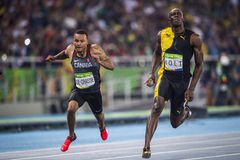