They are Canada's First Family of Emotion.

They are the Dufour-Lapointes of Montreal: gold and silver medal winners in freestyle moguls, platinum winners in family bonding.

In a wild, wide-ranging two-hour press conference – complete with a bathroom break for the three Dufour-Lapointe sisters – there were tears, giggles, sniffles, shrieks, hugs, tributes, a blown kiss and even an insult.

No camera captured the next moment, but the look of stunned loss and separation that washed over the face of Maxime as she drew away from her victorious sisters and nervously reached for a water bottle was enough to bring the rest of the room to tears.

Which would have been unfortunate, given that the cameras had filled and overfilled the press room in celebration of a remarkable opening weekend for Canada: Justine Dufour-Lapointe's gold, Chloé Dufour-Lapointe's silver, Mark McMorris' bronze in the slopestyle snowboard event, and a silver in team figure skating.

According to the Canadian Olympic Committee, this is the best start in history for Canada, something the Dufour-Lapointe sisters should have been celebrating together rather than having a pushy media separate them.

Mercifully, the two sisters drew Maxime back in and, for the rest of their long ordeal in both official languages, never let her go.

It was almost as remarkable a show in the media gathering as it had been on the mountain the day before. Running on two hours sleep, the three sisters came with their parents, Johane Dufour and Yves Lapointe, talked openly about their love and respect for each other, and even showed off the Canadian flags painted on their thumbnails.

Their proud mother blew them a kiss.

Their proud father denied there had been any "sacrifice" to raising such accomplished young daughters.

"I don't think it's the right word," he said. "'Choice' is much better. It's all about choices, what you want to do."

Choices like Johane Dufour parking her master's education while raising the children. Choices like spending summer holidays together sailing on Lake Champlain and the girls having only each other and their parents to play with. Choices like spending each winter weekend on the ski hills, even if at first they had to promise the littlest one, Justine, she would be rewarded with hot chocolate if she stuck the day out with her older and more skilled sisters and completed the last run.

They talked about that day the littlest one realized, "Oh gosh, I'm really good," and about the great journey from those first ski hills in Quebec to the mountain at Krasnaya Polyana in Russia, where it all came together for the two younger sisters.

"Yeah, there's a little bit of mixed emotions," Maxime admitted. But she had done all she could. She was proud of how she had trained hard and skied well enough to qualify for the event. "I will walk away from these Olympics" without regret and with steeled determination to reach her own podium one day, she said. And she could not possibly be more proud of her two sisters, likely to be her business partners if they launch Justine's dream to create a line of clothing for young female athletes.

They said they are the same, yet different. Maxime has hazel eyes and is the more intellectual, the one with common sense. Chloé has dark brown eyes and is shy and the more emotional – which she certainly showed as the girls handed Kleenex around during their talks. Justine is the "clown" who never stops smiling.

Someone pointed out that Justine Dufour-Lapointe is the youngest gold medal winner in freestyle history.

"An Olympic champion at 19 years of age?" Justine said. "Kind of freaking me out."

Sort of freaking out her country as well, as Canada comes out of this marvellous opening weekend with four medals, behind only Norway's seven.

The country's grand hope is to win more medals than the 26 taken in Vancouver four years ago and, with luck, win the most of any country competing here in Sochi.

"For me," Justine Dufour-Lapointe said of her great moment, "it's like the cherry on the cake."

With more to come. 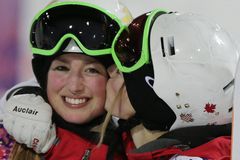 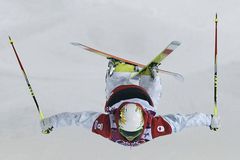