Calling the latest Olympic racing bike a bike is like calling a Formula One racing car a car. From a distance, the racing bike indeed looks like a bike. But get up close and you will realize it is a technological marvel that would have been unimaginable even at the Beijing Games four years ago.

Bicycle designers use wind tunnels to ensure their creations have slippery aerodynamics. The carbon-fibre frames, incredibly, weigh less than one kilogram. Every component and piece of equipment, from the time-trial helmets with the elongated tails to ultra-tight bodysuits used by track racers, are designed to save precious milligrams of weight and cheat the wind.

While the strength and cunning of the racers is still the determining competitive factor by far, the best technology can shave a few precious seconds, or more, off a race. And that can make the difference between winning and losing.

Electronic shifting is without a doubt the biggest recent breakthrough. For the first time, most of the Olympic riders in the road-racing events, including British world champion Mark Cavendish, will ride bikes equipped with e-shifting. This is the equivalent of the semi-automatic gearboxes used on racing cars, which allow the driver to change gears instantaneously by flicking steering-wheel-mounted paddles.

"Electronic shifting on bikes is a race-winning technology," says Conrad Calitz, sales representative, product manager and in-house techie at Sigma Sport, one of the top sellers of pro-level racing bikes in Britain. "It gives you more accurate and faster shifting."

Electronic shifting, in its primitive form, has been around since the early 1990s. The experience was generally dismal for the riders. It wasn't until 2009 that Shimano, the Japanese maker of bike components, introduced the first commercial e-shifting system, known as Di2. It was used by several professional teams that year and even made an appearance in the Tour de France.

But e-shifting remained a curiosity, partly because the systems were hideously expensive and partly because the lever-based, quick-fire manual-shifting systems had been the norm for 20 years. The vast majority of riders, young and old, knew nothing else.

That all changed in the past year or two. Virtually all of the road-racing bikes (though not track, BMX or mountain bikes) built for the London Olympics will be fitted with e-shifting systems from Shimano or Campagnolo, the rival Italian bike equipment maker (SRAM of the United States has yet to launch e-shifting). Racers are now convinced the advantages of e-shifting outweigh the disadvantages.

In a traditional racing bike, the gear shifter and the brakes are integrated into one component mounted on the handlebars. The shifters are attached to cables, which in turn move the front and rear derailleurs that guide the chain up and down the gear sprockets. Use your hand to move the main lever laterally and the chain moves up to a bigger gear; hit the smaller release lever and the opposite happens.

E-shifting replaces levers with little electronic switches, which are connected by wires, or wirelessly, to a lithium-ion battery pack that powers the tiny electric motors in the derailleurs. Hit the button and you hear a whirring sound. The shifting is ultra-fast, precise and virtually eliminates shifting misfires, where the chain moves one notch too far, or grinds between two sprockets.

E-shifting has its drawbacks. The systems are expensive, at about $4,000 a pop; they rely on batteries that can go dead; and they add three to four per cent to the overall weight of the bike. Still, Calitz says, "this is the future of cycling." He expects less expensive versions to be offered in recreational bikes within a few years.

While there is no breakthrough in aerodynamics, there are incremental improvements that are making the bikes ever less wind resistant. All of the top bike designs go through wind-tunnel testing.

The Specialized S-Works Venge – yours for about $20,000 – was put through the wind tunnel at McLaren, home of F1 world champion driver Lewis Hamilton. The tubes on the frame and fork are shaped like blades, as opposed to being rounded, so they slice through the air with minimum turbulence. Calitz, who race bikes, says such frames can save four watts of rider energy. When you consider that a typical pro rider will put out 250 to 300 watts of energy at any given time, it doesn't seem like a lot. But over a long, gruelling race, it adds up.

Even seemingly simple bits of equipment such as the bike shoes are designed to give the racer a competitive edge. Nick Davie, the UK biking sales manager for Big Bear Sports, which distributes Italian-made Sidi racing shoes, says ultra-light carbon-fibre shoes with ventilated soles, which allegedly aids blood circulation, are now the rage. "It's all about weight and stiffness of the shoe, but not so stiff that they transmit every vibration to the foot," he says.

The Sidi Ergo 3 shoe, the top model, costs about $490. The point being, to be fast, it also helps to be wealthy.

"First in a 10 part series on the Science of Sport"

Canada has one Olympic spot, many worthy riders
May 13, 2012 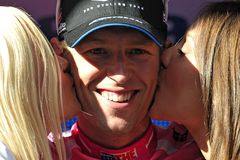