Four years of training in order to get six throws to try and win a medal.

Especially when you know just how long of a road it's actually been for Canadian shot putter Dylan Armstrong.

I grew up in the same hometown as Armstrong, and while a little bit older than the big man, our families know many of the same people. And it's a small enough city that it was hard not to know about his considerable athletic accomplishments living there, as he was competing internationally as a teenager (then in hammer throw) and getting attention from NCAA recruiters in both football and track.

The first time I saw him throw a shot put was when he was only 13 at a city meet competing against other elite high schoolers nearly 20 years ago. (He won.)

So it was a little surreal to be there at Olympic Stadium on Friday night, reliving that experience in a much different setting.

Armstrong didn't let his disappointment show hardly at all last night when he met with the media, but those around him had said for weeks how badly he wanted to be on the Olympic podium.

He had trained essentially every day since Beijing to get to that final group and, in the end, nerves appeared to get the better of him.

Even if he still finished fifth in the world.

Watching it all unfold, it's remarkable to me the difference between heart break at the Olympics and in the professional game, where we see millionaire NHLers lose out against millionaires every season in their bid for the Stanley Cup.

To me, Friday night was worse than four of those failed Cup runs rolled into one for Armstrong, especially considering that he doesn't have the financial security or guarantee of another shot around the corner that most pros do.

Now, that said, Armstrong has been able to make a living as a thrower the past couple of years, with his income going from very little through most of his 20s to a comfortable wage the past few seasons on the Diamond League circuit.

You finish fourth at an Olympics and win silver at the worlds and you're going to get sponsors, appearance fees and travels costs paid.

At most, however, he has another four years in the sport, and not all of them will be as successful as 2011. Like many Olympic events, shot put is more about getting glory at the Games than anything else, even if those athletes are held in very high regard in much of Europe.

He may never hit the true "big time" again in terms of the national consciousness, especially if he retires before the next Games in Rio de Janeiro.

So while most Canadians won't see it, beyond the fourth and fifth places finishes at the Olympics, this could well be Armstrong's real legacy: Kamloops has become a National Throws Centre where athletes from around North American now all want to come and train.

First, he attracted renowned Soviet hammer throw coach Anatoliy Bondarchuk and, in turn, they're both now attracting plenty of top throwers, including two other Canadian Olympians.

Canada, in fact, has eight throwers on its 45-member track team at these Games, more than I bet they've had in recent history, and their participation here is likely to inspire even more athletes down the road.

We've never been a throwing nation but that is starting to change. And I think you have to credit Armstrong's success and profile in the sport as one reason why.

Even if he came up short at the Games. 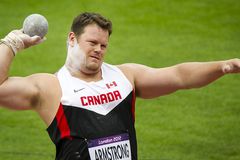