Imagine holding a 100-pound dinner tray overhead with one hand, then turning on a sheet of ice, all the while wearing a pair of Ginsu knives on your feet.

Or envision hurling a 100-pound beer keg high up in the air, spinning it three times, then catching it.

Figure skating is like the decathlon of winter Olympic sports, but packed into less than five minutes. The sport might look pretty in its pageantry of gauzy costumes and lyrical music and smiling skaters, beneath the carefully fabricated facade, muscles are screaming and lungs are exploding.

"Best way to describe it is skating is the complete opposite of how it looks," said world silver medallist Kaetlyn Osmond. "It's not easy. It's not graceful. It's usually painful and tiring. And we just have to put a smile on our face, and get through it. And the more effortless we can make it look, the better."

Consider the fundamentals. Osmond, who has her sights set on the medal podium at the Pyeongchang Olympics, wears a heart monitor while training, and her heart rate soars to almost 200 beats per minute in her four-minute long program.

Figure skating is second only to cross-country skiing in the amount of calories burned in Winter Olympic sports.

Skaters soar four revolutions through the air in less than a second in a quadruple jump, landing with more than seven times their body weight. In a spin, skaters can rotate as fast as five times in a second.

"I was doing a photo shoot recently, and they're like 'Can you do your tricks and twirls?"' scoffed Gabrielle Daleman, bronze medallist at last year's world championships. "I said 'My WHAT? You did not just use that phrase.' No-one really knows what goes on behind the scenes, no-one knows how hard you can fall, and that you literally can bleed. You do sweat, you do cry."

"It's kind of a circus act," said the three-time world champion. "You're trying to run a marathon, but with the explosiveness of a 100-metre dash. It's like running a mile around the track, every straightaway you go for a full-blown sprint, and then on the curves you coast. While maybe trying to juggle. And your big muscles are really working hard and getting fatigued. . . and anyone who's ever felt (lactic acid buildup) knows it's so hard to do very precise adjustments when your muscles are pleading for oxygen."

If the quad jump isn't figure skating's most difficult element, pairs skaters will tell you it's the triple twist lift. The man throws his partner up over his head, where she spins three times while almost horizontal to the ice, before he catches her.

At the world championships in 2011, Meagan Duhamel's elbow caught partner Eric Radford in the face with such force, she broke his nose. They finished the program, his nose a bloody faucet.

"There's nothing natural about it," said Duhamel, who — as opposed to a beer keg — plays a key role in the lift by launching herself up into the air, pushing off Radford's wrists, then throwing a knee up and over into the spin.

"It requires the most precision needed on timing between two people," Radford said.

Duhamel and Radford, who are two-time world pairs champions, believe there's no other sport like it.

"Even in gymnastics, there's no routine that's that long," Radford said. "And in long-distance running, it's one repetitive motion that you're doing over and over again. Doing a long program is a combination of using explosive power, having extreme endurance, and then when you're extremely tired, you have to do very technical elements that require strength and precision and emotion."

Ice dance veteran Tessa Virtue called it "a four-minute sprint. With a smile on your face."

"And don't look tired. Don't you dare," added partner Scott Moir. "I haven't had anything feel like a free dance feels. When you can't lift your arms, there's no saliva in your mouth. Some days I can't get my legs moving. And you have to be your strongest at the finish, because you have to build to the climax, so it's funny, I think when people tune into figure skating for the first time, maybe some of that gets lost, the athleticism, because you do have to end with showmanship."

Virtue and Moir, who will retire after Pyeongchang, said their interest in the science of the sport has grown since they teamed up with a physiologist through B210, which provides training and preparation services to elite athletes.

"He collected so much data last season that we were able to look at our brain waves, our sleep patterns, our heart rates, our breaking, and really understand what sort of a formula for our loading and unloading weeks, and strategizing and setting up a schedule that takes that into account," Virtue said. "I think that will put us at the start line (in South Korea) feeling refreshed and energized, as opposed to exhausted by the end of the season." 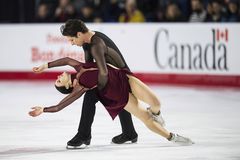 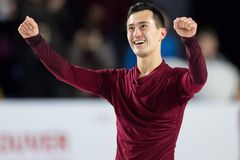 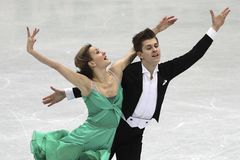