When Gus Kenworthy would let his mind wander into how his perfect Olympics might play out, he pictured a certain scene.

He'd land his best tricks on his final run, win a medal and then — the capper — jump into the stands, ski boots and all, to share a big hug and kiss with the man who meant so much to him.

"That would've been an amazing way to come out," said Kenworthy, the freestyle skier who won the silver medal in Sochi.

But the timing, to say nothing of the country, wasn't quite right to tell the world he was gay. And so Kenworthy left Russia in February 2014 known best as the compassionate daredevil who adopted several stray dogs he came across in the mountains — and as the man who was part of an historic U.S. sweep of the first Olympic ski slopestyle contest.

Because he wasn't ready, the journey to Sochi was far less perfect than it could've been for the 24-year-old from Telluride, Colorado, who on Thursday, in interviews with The Associated Press and ESPN The Magazine, revealed to the public that he is gay.

"I felt like I was already being so courageous with my body and my actions and the things I was doing in order to try to win and be the best," Kenworthy said at his home in Denver. "Then, I was being such a coward in this other way, where I wouldn't let anyone know. So they were battling each other. I'm excited where those two things can go hand in hand."

As young as age 5, Kenworthy felt he was different. Growing up in a mountain town with about 2,000 residents and only 50 kids in the school gives a boy who knows he's gay few places to hide. He threw himself into skiing to show he was every bit as tough and brave as anyone else.

But there was no denying he felt conflicted. He spoke of severe depression, thoughts of suicide, the internal battle of how to "live authentically and not feel like I need to hide anymore."

Heading into the biggest ski contest of his life, he wasn't all the way there. He hadn't told his parents, or his brothers. And though he had let himself get caught up in the idea of a celebratory kiss with his boyfriend at the bottom of the hill, and the many messages it would send, he knew it couldn't happen.

"The idea of kissing my boyfriend at the bottom of my run would've been, in addition to me coming out, a silent f--- you to the anti-gay legislature in place in Russia," he said.

Instead, his post-victory tour involved him being portrayed as the pet-loving heartthrob who brought Olympic glory to his home country. Typical of winning athletes who go on their post-Olympic interview tours, he faced questions about much more than just skiing.

Who is your celebrity crush? Miley Cyrus, Kenworthy lied.

How do you feel about saving all those dogs? He couldn't tell the real story and so he lied again: Couldn't be happier.

Truth was, he was nothing more than a casual fan of Cyrus, and the person who did most of the hard work with the dogs — including staying behind in Russia for more than a month to get them back to the United States — was his boyfriend at the time.

"He got zero credit and I was getting asked about it on every show and in every interview," Kenworthy said.

Much as the label "Dog Guy" stuck with him long after Sochi, Kenworthy is aware he could be cast, too simply, as the "Gay Skier."

But in the 20 months since his trip to Russia, where debate raged over gay rights and the government's law against gay "propaganda," Kenworthy has become more assured about who he is, both on and off the slopes. He has won a title on the Dew Tour, more World Cup podiums and had a legitimate chance at the overall championship last season until a leg and knee injury ended things early.

Relegated to the gym for months of rehab, he finally had the time to crystalize his feelings about whether he was ready to tell the world who he really is.

He said he likes the idea of coming out while he's at the top of his game, while people in his sport — especially kids — are paying attention.

"We admire Gus for having the strength to tell the world who he is as a person, and paving the way for others to do the same," said Tiger Shaw, the CEO of U.S. Ski and Snowboard Association.

While the locker-room atmosphere of football or basketball doesn't exist in freestyle skiing, it is still a sport built on a certain brand of devil-may-care machismo. How will a gay skier be received among this cadre of daredevils?

For a man who makes a living catapulting off of 70-foot-high ramps, this is a very different sort of leap.

"I don't know what the future has in store," Kenworthy said, "but I'm kind of looking forward to it." 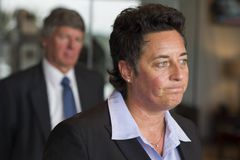 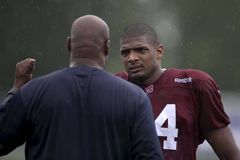 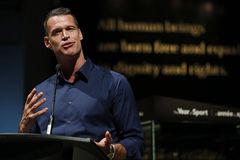