As Bob Tutton watched the high-security, logo-encrusted spectacle unfold at the Olympic stadium on Friday, he marvelled at how easy it had been for him to get into the opening ceremonies.

The 18-year-old Englishman had bought an opening-day ticket for the price of a light lunch a couple days in advance, boarded at bus near his Berkshire home, and rode to the stadium gates. "We piled off the coaches, and just walked down to the stadium and went inside – – it was easy to get into the Olympics, if you were willing to go up to London and do it."

That was the 1948 Olympics, famous as the "austerity games" in a far more debt-burdened Britain than 2012. For the dwindling circle of spectators who attended the last London Olympics, this summer's Games offer a jarring contrast – – and a chance to reflect on the meaning of the Games.

If the 2012 Games are known for going hundreds of millions over budget and being burdened with rules imposed by corporate sponsors, London's last Olympics managed to turn a profit without any substantial money from the government or having any private-sector sponsors.

While nobody wants to return to those difficult postwar years, when food rationing was rife and bomb craters pocked London, there is a lot of nostalgia among he '48 generation for the simpler, more intimate Olympics.

"It was sprung on Britain, in many ways – – we weren't really ready for an Olympics and we couldn't afford to put up a single building," says Mr. Tutton, now 84. "But I think we handled it very well."

Like virtually everyone attending those earlier opening ceremonies, Mr. Tutton was an amateur athlete himself. He was 18, and one of the best runners in the town of Reading. Hardly anyone outside of athletic circles paid much attention to the Games while they were taking place, so the event was his: He was a torch bearer, and travelled to London on four occasions to watch sporting events, for which some tickets only cost six pence.

Michael Barrenger was an amateur athlete, too – – a basketball and running enthusiast in his bomb-riddled north London neighbourhood. He'd saved a couple days' wages from his apprenticeship to buy one ticket to the opening ceremony and one to the closing – – which he gave to his mother.

Most days he would stroll over to one of the municipal arenas being used for Olympic events, get a ticket and watch the high-level athletics unfold before him. Nobody prevented him from walking anywhere.

"Security didn't enter into it– – that was something none of us had ever considered in connection with sporting events," Mr. Barrenger, also 84, said from his Ottawa home. "And everybody used public transport. The athletes had free travel on the London buses – – that was it. There were no reserved lanes or special highways or trains."

One morning he ran into the entire Uruguayan basketball team standing around on the sidewalk, lost. He ushered them aboard a double-decker bus and took them to Haringey Borough arena, just in time for the game.

Britain's government couldn't afford even a low-key Olympics, so relied on amateur athletic associations and ticket sales to finance almost the entire budget of £600,000 (equivalent to about $30-million today – – compared to the $14.5-billion cost of the current Olympics). Those Games came in slightly under budget, and sold enough tickets to turn a profit of £10,000.

Coca-Cola was visible at the Olympics for the first time, the participants remember – – but only as a novel imported beverage sold at the snack bars of the municipal arenas..

"This was purely amateur – – there were no Russian oligarchs picking up the tab for teams, no corporate logos on anything, and so on," Mr. Barrenger said. "But it went very well – the Games felt like a success. Most of the population didn't know about it– – I didn't know anybody who owned a television – but for those of us who are there, it made us feel good."

While both of these 1948 Games veterans remain enthusiastic about amateur sports, and both planned to watch Friday's ceremonies on TV and cheer on their favourite athletes, both had decided to stay away from London – – in large part because of their memories of 1948.

"My wife Sheena and I decided we definitely are not going," said Mr. Tutton from his Berkshire home. "It is too hectic and just too much bother to get in. In 1948 we had to, because if you wanted to see something you had to go there and watch it. This time around, we're better off watching it on the telly." 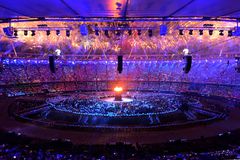